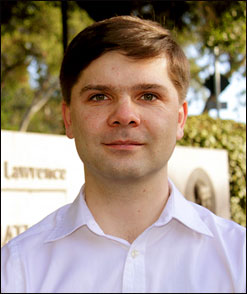 Like many scientists, Oleksandr Grebenyuk is on a quest to better understand how the world works. A post-doctoral fellow at Lawrence Berkeley National Laboratory and originally from Ukraine, Grebenyuk has worked with the Relativistic Heavy Ion Collider at Brookhaven National Laboratory to study properties of the building blocks of matter for more than six years.

How are you connected to RHIC?

I am working on the STAR experiment and use its data remotely from Berkeley. During the data taking periods, I visit BNL to help prepare the STAR detector and then work some shifts running the experiment from its control room.

What are you trying to achieve there?

I am trying to gather some new knowledge about how our world works by studying the properties of elementary blocks of matter. By measuring the spin-dependent effects in high-energy proton collisions, I am studying the internal structure of elementary particles.

RHIC is a unique machine in the world, and it’s best at what it does: colliding heavy ions, and polarized protons. I have participated in both the heavy-ion and spin programs at STAR, and each have already produced new and intriguing results, with more to come in the following years.

STAR has certainly contributed to the world’s collection of knowledge about nature, with over 100 scientific publications. I like to think that I too made a contribution there, although I wouldn’t say that I, personally, have discovered anything — it is a collaborative effort.

It was when I studied nuclear physics at Kiev National University in Ukraine. RHIC experiments were mentioned as an example of modern large detectors. At the time, I had no idea I would join one of them. I started working with RHIC as a Ph.D. student at NIKHEF in the Netherlands in mid-2003. I have continued to work with it since then and have been stationed at BNL for about 1.5 years.

The first conference, first visit to the experiment, the Ph.D. defense, first published paper — those were all wonderful things. Hopefully, the first Nobel Prize is waiting ahead.

I work with several other people on one scientific project — this is the usual way to do it here. Then we publish the results. This is a combination of using your personal skills for the job at hand, and working in a team to reach the big goal. Both are equally important.

Do you have any other special talents/interests?

My great passion for many years has been ballroom dancing. During the last year, I participated in several dance competitions in the Bay area with some success.

Is there anything else you would like to add?

I am deeply thankful to my colleagues at STAR for creating this wonderful working environment and to my wife Lena for all the support she is giving to me.