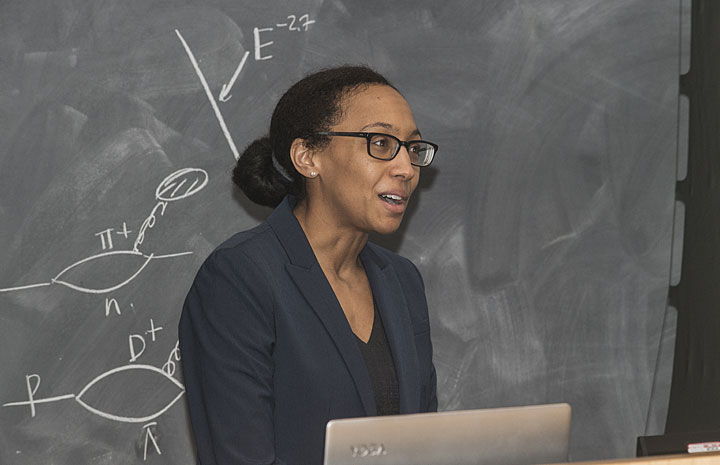 Brookhaven Women in Science (BWIS) has awarded the annual Gertrude Scharff-Goldhaber Prize to Brooke Russell, a graduate student at Yale University. Each year BWIS awards a female physics graduate student conducting research at the U.S. Department of Energy’s (DOE) Brookhaven National Laboratory or attending Stony Brook University with a $1,000 prize funded by Brookhaven Science Associates. Russell was chosen for the award because of her outstanding research with the MicroBOONE experiment.

At the July 3 award ceremony, BWIS gratefully acknowledged how this year’s prize was augmented by the Lab’s Inclusion & Diversity Office and other contributors with an additional $1,000, allowing BWIS to increase the award to a total of $2,000.

Attending the ceremony were Gertrude “Trudy” Scharff-Goldhaber’s two sons, Michael and Alfred, who spoke of their mother’s life and career. Michael Goldhaber described how his mother faced challenges her whole life, noting that she was a pioneer in a male-dominated field and had to battle persecution as a Jew in Nazi Germany to earn her Ph.D. in 1935. Despite losing her parents in the Holocaust and being forced to seek refuge in the United States, Scharff-Goldhaber persisted in pursuing what she was most passionate about, her physics research, which eventually evolved into a notable career.

As event host and Prize Committee Chair Marc-André Pleier noted, Scharff-Goldhaber was not only a “brilliant” nuclear physicist, but also passionate about breaking down barriers that kept women out of science, technology, engineering, and math fields. Herself the first female Ph.D. physicist at Brookhaven Lab, Scharff-Goldhaber paved the way for generations of female scientists.

To honor her contributions to Brookhaven and the world, BWIS established the Gertrude Scharff-Goldhaber Prize in 1992. With the award now in its 27th year, Russell joins a legacy of accomplished female physicists who followed in Scharff-Goldhaber’s footsteps. About 70 percent of previous awardees have careers in academia, and more than half now hold tenure or tenure-track positions.

Brookhaven Women in Science awarded the 2019 Gertrude Scharff-Goldhaber Prize to Brooke Russell, a graduate student at Yale University. Russell was chosen for the award because of her outstanding research with the MicroBOONE experiment.

Russell thanked BWIS and the prize committee and said “I’m honored to receive this award. It has been a privilege to work here on site for the last two years, which has been instrumental in the development in my career as a physicist and the opportunity of a lifetime.”

Russell also presented her most recent research on liquid argon time projection chambers, which are a key technology enabling physicists to address critical questions in neutrino physics and hence deepen our understanding of the universe.

Russell received an undergraduate degree in physics from Princeton University in 2011 and in 2014 she began doctoral research at Yale University. She came to the Lab in fall of 2016 to work under the tutelage of Xin Qian through a DOE Office of Science Graduate Student Research Award.

Since then she has been working with physicists in Brookhaven’s Electronics Detector Group on MicroBooNE physics analyses. Upon receipt of her doctorate, she will go to Lawrence Berkeley National Laboratory to work on 3D pixelated charge readout devices to enable the single phase LArTPC DUNE Near Detector physics program as an Owen Chamberlain Postdoctoral Fellow. 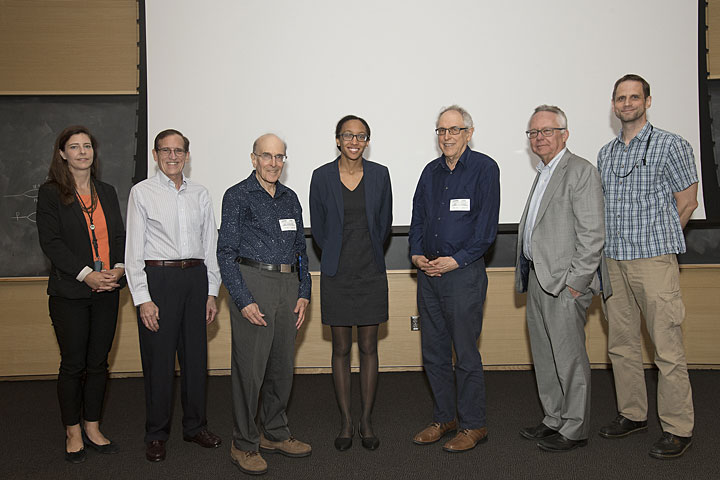