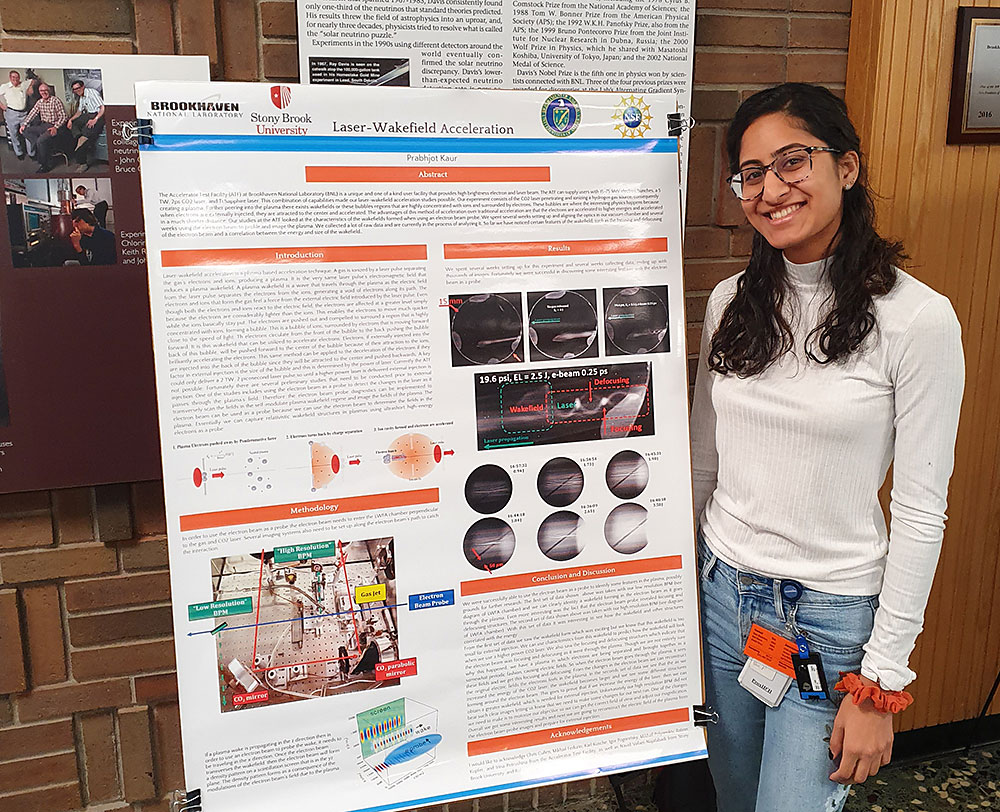 Prabhjot Kaur with a poster describing her work on laser wakefield acceleration, a technique that could bring particles to high energies in smaller-size particle accelerators. Photo courtesy of Prabhjot Kaur

The Accelerator Test Facility (ATF) at the U.S. Department of Energy’s (DOE) Brookhaven National Laboratory provides users with high-brightness electron and laser beams, and lots of opportunity for students like Prabhjot Kaur to learn. As an intern through DOE’s Science Undergraduate Laboratory Internships (SULI) program, administered at Brookhaven by the Office of Educational Programs, Kaur has worked with ATF user Navid Vafaei-Najafabadi, an assistant professor of physics and astronomy at Stony Brook University, on an experiment on laser wakefield acceleration.

Laser wakefield acceleration is often called the “tabletop accelerator,” said Kaur. “The goal is to use lasers to accelerate particles to greater energies over shorter distances than can be done with traditional accelerators—and therefore in a much smaller space.”

The approach could bring down the cost and eliminate other obstacles for a range of accelerator applications, including physics research, x-ray radiation therapy for cancer, and processes such as sterilizing food.

Sending an energetic laser beam into a diffuse substance like hydrogen gas will ionize, or knock electrons off, the hydrogen atoms. This process pushes the electrons outward and leaves a plasma of charged ions—naked protons—in its wake.

Scientists like Vafaei-Najafabadi are exploring ways to inject electrons into the plasma wake so they can ride the “waves” generated by the laser to gain kinetic energy.

Electrons accelerated in this way could be used to generate x-rays for cancer therapy, scanning packages or cargo, or sterilizing food.

“With x-ray therapy, basically you accelerate electrons and make them strike a target material. That generates x-rays you can direct towards a tumor,” Kaur said.

Sometimes things don't go the way that you want them to go. On the spot, you have to think of solutions, figure out what the problems are.

A similar approach can generate gamma rays for gamma ray radiography, which “can be used to look inside materials,” Kaur said. “If we get shipments or packages, without opening them, we can look inside [for dangerous substances or items]—like when you go to the airport and transportation security officers look inside your luggage.”

Plasma wakefield acceleration could lead to compact, room-sized accelerators for modest energy particles, Vafaei-Najafabadi said. “These small accelerators would make this kind of science more widely available across the globe,” he noted.

It could also bring particles to very high energies for use in particle colliders, where extremely high-quality particle beams are needed.

“Even though these particles can be accelerated to high speeds in a distance much shorter than a normal accelerator,” he said, “what takes place within the plasma is not fully understood.”  Research at ATF is helping scientists explore those questions, Vafaei-Najafabadi said.

“The presence of a high-quality electron beam in the same place as the high-power laser pulse is what makes ATF a unique facility among all the high-power laser labs in the U.S.,” he explained. This provides tools to explore how the plasma works in ways not accessible elsewhere. 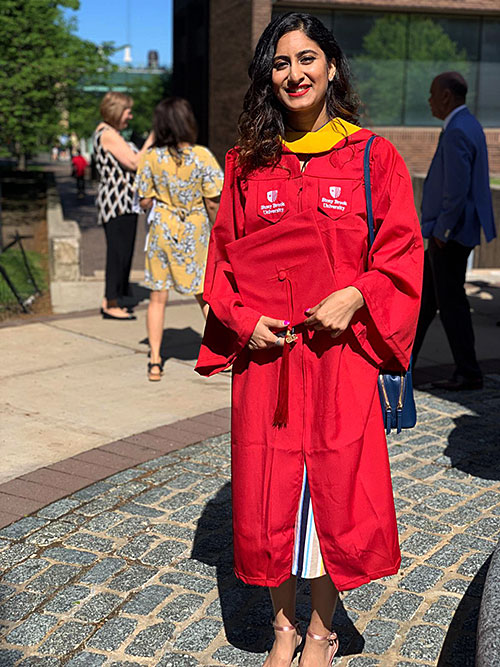 Kaur graduated from Stony Brook University in 2019, where she double majored in physics and applied mathematics/statistics. Photo courtesy of Prabhjot Kaur

A key part of Kaur’s work has been to create a unique, high-resolution probe—an imaging system that will allow scientists to explore the substructure of the plasma. This has given Kaur a taste of what it is like to work on the experimental side of physics, including all the trials and tribulations that come with it.

“The first challenge that I faced was learning about the theory of plasma physics,” Kaur said. “And in this physics, there’s also an experimental side. And sometimes things don't go the way that you want them to go. On the spot, you have to think of solutions, figure out what the problems are. So, you also have to be an engineer.”

Creating the probe for studying the plasma and finding a lens with high enough resolution to visualize its components was one of the most challenging parts, she said.

“I had to learn about how the optics work and what kind of equipment we needed,” she said. “I tested a bunch of different lenses—mechanical lenses, single lenses, and then we ended up using this piece called an objective.”

The goal was to find a lens with a resolution of five microns, which is smaller than the width of a hair.

“No matter what we did, what combination we used, the simple lenses would not work,” Vafaei-Najafabadi said. “We had to go to an objective, a compound lens, to get to the resolution that we want.”

A compound lens is similar to the eyepiece of the microscope, Vafaei-Najafabadi explained.

It is made up of a number of lenses right behind each other. “Each is supposed to compensate for the weakness of the others,” he said.

“It was a challenge, trying to experiment with different equipment and trying to get that resolution,” Kaur said.

But the trials and errors are all part of the process.

“That’s part of the scientific work, and we train the students for that,” Vafaei-Najafabadi said. “You get to a problem, you have no idea why it's not working, and then you come up with an hypothesis. And when you learn that that also doesn't work, then you have to come up with a more refined hypothesis.”

Kaur also got experience working on different experiments at the ATF.

“This experience has allowed me to learn how experiments work in general,” she said. “I like doing the engineering side, and I like learning about the theory. And even though there are many challenges, the SULI program solidified my desire to continue to do research.”

Kaur graduated from Stony Brook University in 2019, where she double majored in physics and applied mathematics/statistics. She says that she hasn’t officially accepted any graduate school offers yet, but will most likely be attending the University of Michigan in the fall to begin working toward a Ph.D. in nuclear engineering and radiological sciences.

The Accelerator Test Facility (ATF) is a DOE Office of Science User Facility.