A New Approach for Studying Electric Charge Arrangements in a Superconductor 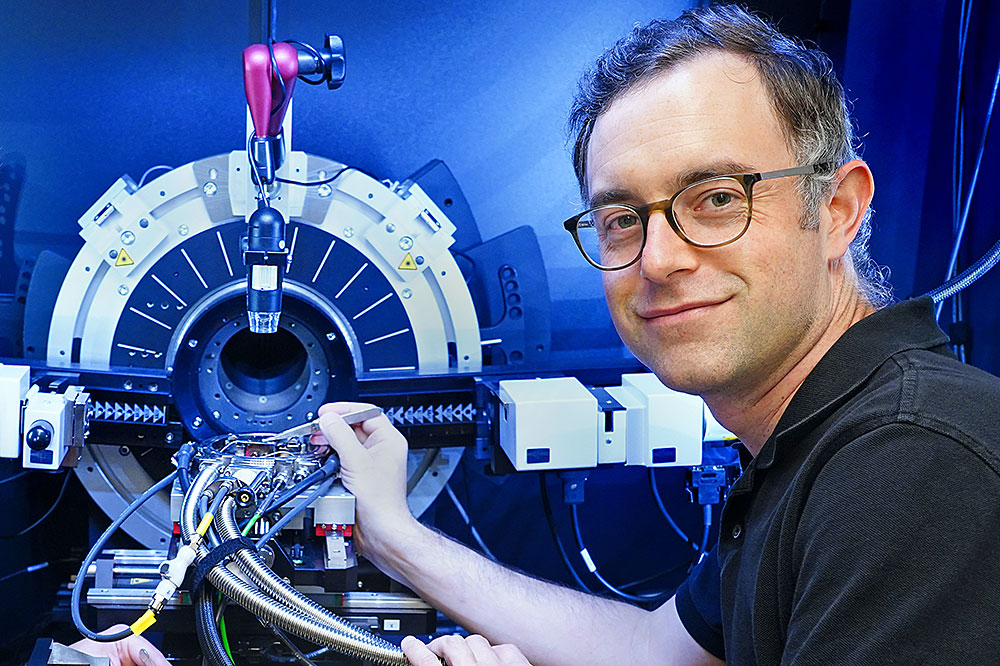 High-temperature superconductors are a class of materials that can conduct electricity with almost zero resistance at temperatures that are relatively high compared to their standard counterparts, which must be chilled to nearly absolute zero—the coldest temperature possible. The high-temperature materials are exciting because they hold the possibility of revolutionizing modern life, such as by facilitating ultra-efficient energy transmission or being used to create cutting-edge quantum computers.

One particular group of high-temperature superconductors, the cuprates, has been studied for 30 years, yet scientists still cannot fully explain how they work: What goes on inside a “typical” cuprate?

Piecing together a complete picture of their electronic behavior is vital to engineering the “holy grail” of cuprates: a versatile, robust material that can superconduct at room temperature and ambient pressure.

To that end, a research group led by scientists from the U.S. Department of Energy’s (DOE’s) Brookhaven National Laboratory recently discovered new information about the electronic behavior of a particular cuprate using an x-ray technique that has not—until now—been widely used to study them. Working in part at Brookhaven Lab’s National Synchrotron Light Source II (NSLS-II), a DOE Office of Science User Facility, the researchers used a form of x-ray scattering to investigate a specific arrangement of electric charge that arises in cuprates: an ordered pattern of electrons known as a charge-density wave (CDW).

The x-ray technique—resonant inelastic x-ray scattering (RIXS)—may open up intriguing new avenues of research into these materials. The results of this investigation are published in the May 21 online edition of Physical Review Letters.

A CDW can be visualized as a standing-wave pattern of electrons. CDWs arise in ordered, crystalline materials, such as cuprates, which are composed of alternating layers of copper oxide and an insulator (typically another oxide). The insulating planes serve as charge reservoirs that feed the copper oxide layers where the superconductivity takes place.

CDWs have long been suspected to play a vital role in how the cuprates superconduct, but characterizing one—how it emerges and disappears, how it behaves, how it adds to or impedes superconductivity—is an ongoing challenge for scientists.

At NSLS-II and the United Kingdom’s Diamond Light Source, the group studied a cuprate composed of lanthanum, copper, and oxygen that was “doped” with small amounts of strontium (dubbed LSCO). Doping is a technique in which tiny amounts of an impurity substance are added to a compound to alter or improve its electrical, optical, or structural properties.

The group created four LSCO samples with four different doping levels. The doping levels cover a range of electronic behavior in which the CDW is at its strongest and then disappears. This range also covers a transition in the electronic structure of LSCO: the “Fermi surface,” which is a theoretical 3-D shell that separates the filled and unfilled electron orbitals—the volume around a nucleus where particular electrons are most likely to be—when the material has a temperature of absolute zero. Fermi surfaces are abstract, but they are very important, often predicting a material’s electronic behavior as well as many other properties.

In RIXS, the energy of incident x-ray photons is transferred to core-level electrons in a crystalline sample, “exciting” them into the conduction band. The vacancies left by the core electrons are filled by valence-band electrons, which emit a photon as they make the jump to the lower-energy band. Those emitted photons form a spectrum of energies that can be analyzed to gain information about the excitations and the material’s overall electronic behavior.

At NSLS-II, the work was done at the Soft Inelastic X-Ray (SIX) beamline, which offers ultra-high energy resolution RIXS. The technique has an enhanced sensitivity to excitations of both valence electrons and phonons—the collective vibrations of the atomic lattice. A CDW can be associated with these excitations.

“The recent discovery that CDW effects are weaved into cuprate RIXS spectra has been exciting for researchers in this field, as it holds the tantalizing promise that we may be able to clarify the interactions that give rise to CDWs,” said Mark Dean, a physicist in Brookhaven’s Condensed Matter Physics and Materials Science Department, who led the study together with Xuerong Liu from Shanghai Tech University and Valentina Bisogni from NSLS-II. 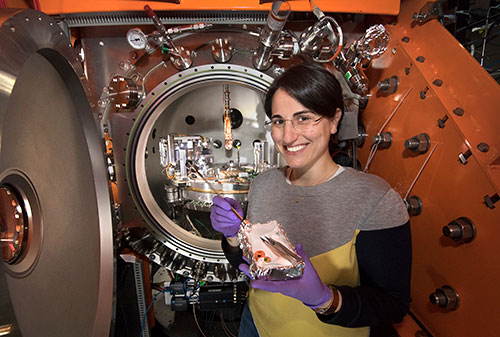 Brookhaven Lab scientist Valentina Bisogni shows how to load samples in to the chamber of the Soft Inelastic X-Ray (SIX) beamline at the National Synchrotron Light Source II (NSLS-II).

Dean and his colleagues found that the RIXS spectra are mostly unchanged at all doping levels, despite crossing the Fermi transition. This indicates that the spectra are not related to excitations near the Fermi surface. But learning more from the RIXS spectra—namely, isolating and interpreting the possible effects of a CDW—is a challenge.

“CDWs inevitably modify their host crystal lattice and thus the phonons,” said Bisogni. “Further complicating things is the fact that there are different approaches to interpreting RIXS data.”

Through rigorous, careful analysis, the research team concluded that the RIXS spectra have little or no direct relationship to electronic excitations. Instead, they are most powerfully affected by phonon behavior, including a “softening” of the phonons—a reduction in frequency—induced by the CDW and changes in the intensity of the phonons.

“The world-record energy resolution recently achieved at the SIX beamline was crucial to this investigation, allowing us to resolve and identify the different contributions present in the RIXS data,” said Dean.

The group states that their results support a scenario in which the CDW is driven by “strong correlations” between electrons—a term used to describe not-well-understood electronic behaviors in materials—and add support to the idea that the RIXS response in the cuprates is driven by how the CDW modifies the crystal lattice, and how those modifications invoke more complex interactions.

“Thanks to the performance of SIX, we were able to place a new piece in the puzzle that is the physics of the cuprate superconductors,” said Bisogni. “After all the work getting the beamline built, commissioned, and optimized, it is great to see high-impact science coming out of that effort. We hope that this publication will be the first of many such collaborative publications.”

In future work, the same team hope to study these systems with even higher energy resolution to reveal details of the lattice’s lower energy vibrational modes.