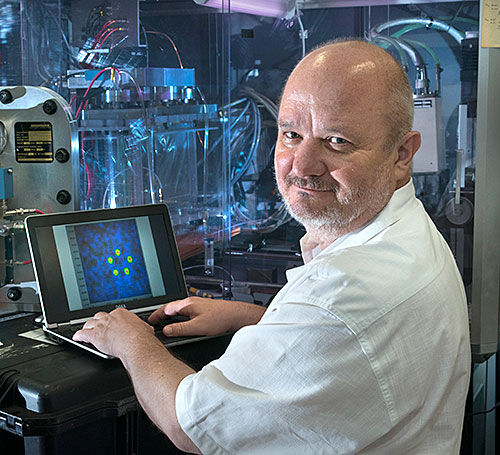 Dioszegi was active in experimental nuclear physics for more than three decades.

“One of the things I was most impressed by was the fact that he had to check everything,” said retired NNS physicist Peter Vanier. “He didn’t take anything at face value. Anything that anybody claimed, he’d go and check it himself and make sure that he believed in it. I think that’s a mark of a good scientist.”

This tendency carried the group’s work forward and his mathematical modeling made it more rigorous, Vanier said.

“Istvan demonstrated an unusual dedication to his work,” said NNS Department Chair Susan Pepper. “In the last year of his life, he worked around the medical treatments he received, which were significant.”

Dioszegi’s extended experience included γ-ray spectroscopy, neutron and heavy ion physics, nuclear fission, and giant resonances, Vanier said. He was highly skilled in nuclear detector development and in the use of large detector arrays. He was also an expert of advanced computer simulation of nuclear reactions and Monte Carlo neutron and photon transport codes known as MCNP, Geant, and Fluka, Vanier said.

He assembled a high-speed multichannel data acquisition system for time-of-flight measurements of neutron-gamma events, which was tested in collaboration with Vanier and Cynthia Salwen of Brookhaven Lab and John Mihalczo and Seth McConchie of Oak Ridge National Laboratory, Vanier said.

Dioszegi was principal investigator for several Brookhaven Lab projects funded by the U.S. Department of Energy’s National Nuclear Security Administration (NNSA). This included his proposal and development of a stereo thermal neutron imager for counting the number of nuclear warheads in a re-entry vehicle at the top of a missile. The experiment was based on a coded aperture camera originally developed by Vanier and BNL retiree, Leon Forman.

Dioszegi obtained funding from NNSA to support the construction of two identical detectors, one of which would belong to Brookhaven Lab’s NNS. The plan was to use both detectors together in a stereo mode to capture unambiguous images of objects that might obscure each other. He successfully tested the concept by using a single detector in two sequential locations, which offered a significant verification capability in the area of nuclear warhead dismantlement and arms control, Indusi said.

Vanier recalled that Dioszegi was initially skeptical about the work the group had done on coded aperture thermal neutron imaging since 1996. He needed to prove the concept to his own satisfaction both by detailed simulation using standard Monte Carlo modeling and by careful experiments in the lab, Vanier said.

Dioszegi created models for the pad detector to understand the charge sharing between neighboring electrodes. He modeled the coded aperture and its ability to cast shadows on the array of pads in the detector and thereby generate an image. He studied several configurations of moderated neutron sources that might be encountered if the system were ever deployed in the verification of arms control treaties.

He later moved on to perform Monte Carlo modeling of the beam/target interactions at the Brookhaven Linac Isotope Production facility, providing valuable analyses of the doses needed to produce the desired isotopes.

You can watch Dioszegi discuss the principles of neutron imaging and advancements to verify nuclear warheads during the 495th Brookhaven Lecture in 2014. He authored and co-authored more than 60 papers published in refereed journals and contributed to a number of other conference proceedings.

Dioszegi earned a Ph.D. at the Eötvös University in Budapest, Hungary, in 1985 and went on to work at the Institute of Isotopes of the Hungarian Academy of Sciences. From 1989 to 2002, he worked at the Nuclear Structure Laboratory at Stony Brook University before first joining Brookhaven Lab’s Medical Department.

Outside of Brookhaven Lab, Dioszegi, who was born in Budapest, had an interest in music that began at a young age, starting with learning to play the piano, according to a family obituary. In pursuit of his love for Baroque music, he went on to earn a qualification in organ music.

Locally, Dioszegi served as the organist and music director of St. James Episcopal Church from 2001 to 2016. He followed Fr. Michael Bartolomeo to Trinity Episcopal Church in Northport in 2017. He also learned to play the harpsichord and gave several concerts at the Staller Center at Stony Brook University as part of a chamber ensemble.

Dioszegi also enjoyed travel and the outdoors. On trips to other national laboratories throughout the United States for business, he took the opportunity to visit nearby national parks and experience their natural wonders. Vanier recalled taking a drive with Dioszegi to Yosemite Park where they saw the impressive cliff face El Capitan after a trip to Livermore National Lab.

He is survived by his sons, Balint and Marton, and his wife Edit.