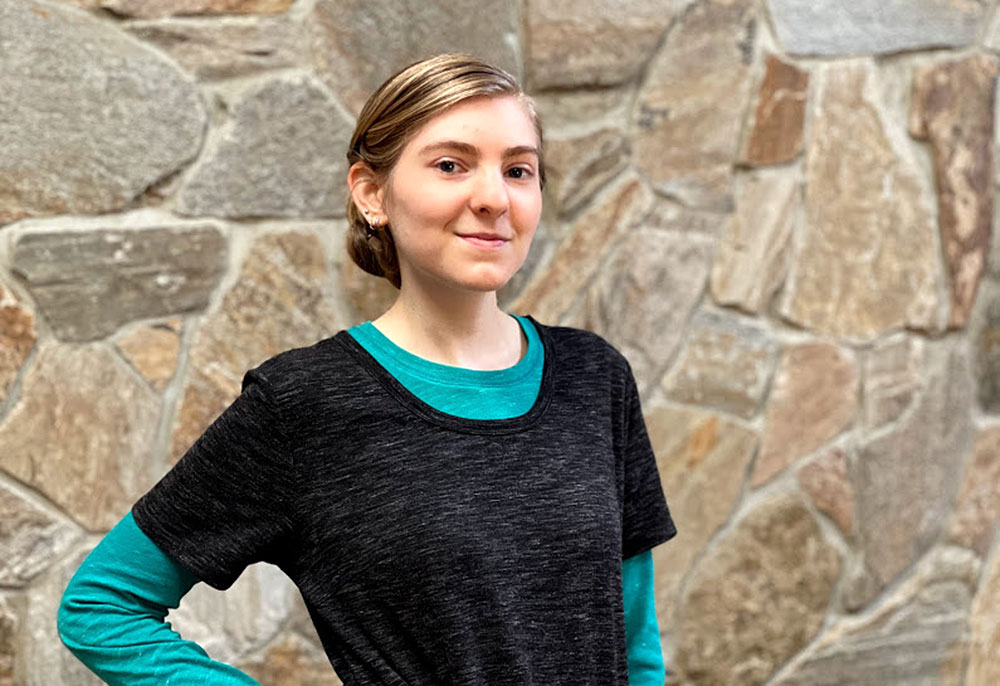 When Smith College went remote earlier this year because of the COVID-19 pandemic, Caroline Sears—a rising junior double majoring in engineering and music—decided to take a leave of absence until in-person classes resumed. In the meantime, she would look for an educational experience that would be as fulfilling as her coursework but more conducive to the current public health situation. On Facebook, as part of a group of alumnae from the Seven Sisters Colleges—which includes Smith and six other historically women’s liberal arts colleges in the Northeastern United States—Sears posted that she was seeking an online internship in science, technology, engineering, and mathematics (STEM). This post caught the attention of fellow Facebook group member Elizabeth McCutchan, an alumna of Wellesley College and a scientist at the National Nuclear Data Center (NNDC), part of the Nuclear Science and Technology Department at the U.S. Department of Energy’s (DOE) Brookhaven National Laboratory. The NNDC collects, evaluates, archives, and distributes nuclear physics data for basic and applied research.

“At the NNDC, our research spans all aspects of nuclear data, from fundamental research to applied projects in nuclear medicine and power,” said McCutchan.  “Workforce development is important to us, and we host many students in internships each year in an effort to involve undergraduates in all facets of nuclear science. We have had interns from many different backgrounds, but a common denominator is a desire to explore the workings of nuclei. Caroline’s strong background in math and physics and her interest in learning how nuclear data relate to nuclear power made her an excellent match for a new project we were just beginning on fission yields.”

Since September, through the Supplemental Undergraduate Research Program managed by Brookhaven Lab’s Office of Educational Programs, Sears has been an NNDC intern under the mentorship of McCutchan and NNDC postdoctoral researcher Andrea Mattera. For her internship, Sears has been completing two subprojects of a larger project to evaluate nuclear fission yields. Nuclear fission is a reaction where the nucleus of a target atom splits into two smaller and lighter nuclei, or fission fragments. The yields refer to the amounts of each fission fragment produced per reaction.

Sears’ first subproject is compiling data on isomeric yield ratios. As Sears explained, a nuclear isomer is an atomic nucleus excited to a “metastable” state.

“When nuclear fission occurs, you get two particles that are very unstable because they have a lot of energy,” said Sears. “To try to get rid of this energy and reach the ground state, which has the lowest energy in the system, they release gamma rays. In the isomeric, or metastable, state, nuclei have lost some energy through gamma decay but not so much that they’re at the ground state. This state lasts on the order of half a second or more—long enough to be measured.” 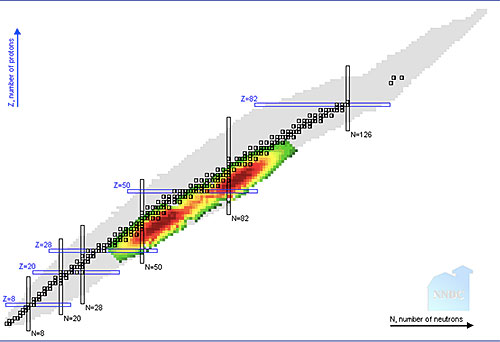 A chart of fission fragment yields of U-235. The colors correspond to how often the particular fission product is produced. From the NuDat database on the NNDC website (the website version is interactive).

“For nuclear reactors, you want to know the probability of producing a certain product in a certain state for a certain amount of time.”

Since the 1970s, the Madland-England model has been the standard for calculating isomeric yield ratios, some of which cannot be measured because they are difficult to produce in lab settings or have limited available data. However, this model is semi-empirical and very simplified, based on only two parameters: the energy of the particle inducing fission and the angular momentum (spin) of the isomeric and ground state fission fragments.

“One of the pieces of information you plug into the model is a constant that Madland and England gave for the average value of the spin distributions for different energy levels,” said Sears. “I set out to see whether these constants could be updated by inverting the Madland-England equation to take in experimentally measured isomeric yield ratios instead. Then, I compared my output values with their constants. However, after plotting the averages of the values that came out of my equation, I couldn’t find any consistencies.”

Though the project results didn’t suggest a way to recalibrate the model parameters with measured data to improve the model’s accuracy, they did lead to a compilation of data showing where there are significant gaps in fission fragment measurements. According to Sears, this data compilation will help experimentalists fill in these gaps and develop new models, with the goal of one day making the Madland-England model obsolete.

For her analysis, Sears used a dataset containing about 20 unique target nuclei undergoing spontaneous and particle-induced (neutrons; protons; and alpha, gamma, and heavy particles) fission at different energy levels. A former intern had started this data compilation for a machine-learning experiment, writing a code that extracted anything with an isomeric value from an experimental nuclear reaction database called EXFOR. What Sears did was turn this “kitchen sink” compilation into a more useful product, sorting the information into smaller subsets of finer detail—for example, only neutron-induced reactions at a particular energy level.

For her second subproject, Sears is focusing on the neutron-induced fission of one target nucleus: uranium-238 (U-238). In particular, she is plotting the relationship between the yield of each measured fission fragment of U-238 and the energy of the neutron striking the target nucleus. 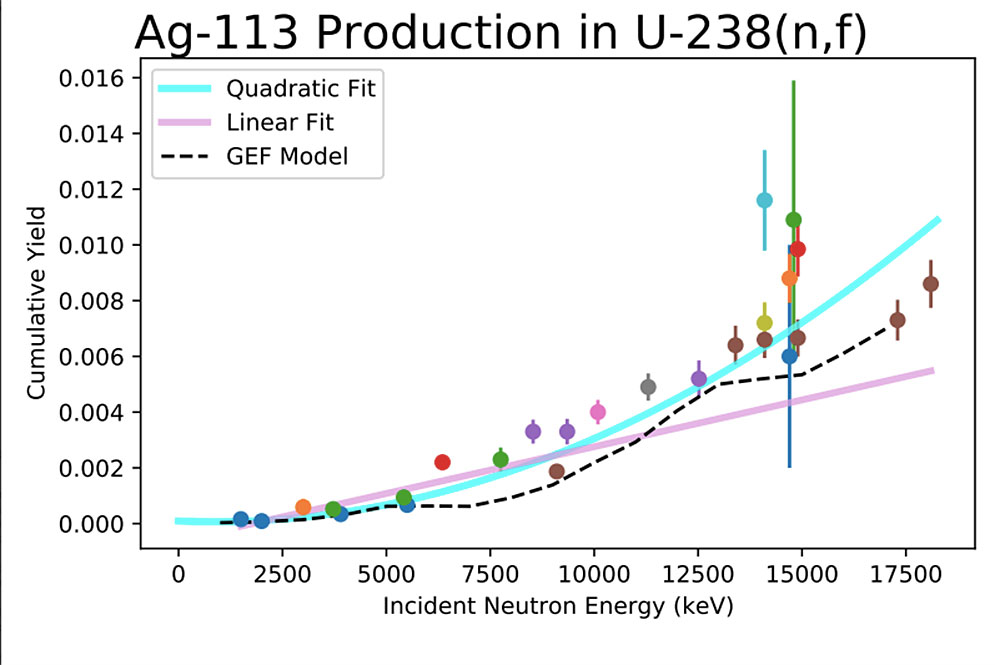 A simplified graph plotting the yield of the silver-113 (Ag-113) fission fragment of U-238 over a range of neutron energies. The lines and curves running through the data points correspond to different regression techniques: the teal curve fits the data to a parabola; the purple line fits the data to a line; and the dotted black line shows the result of the General Fission (GEF) model, which models ground state fission yields.

“Most of the available data is on neutron-induced fission,” said Sears. “Mattera started the compilation of yields with U-238, a nuclide of interest for reactor antineutrino applications and for which there is enough data to explore the energy dependency but not too much that the analysis would become unmanageable. The goal is to be able to look at other target nuclei in the future.”

Sears’ contributions are on the software side. She’s written code in the programming language Python with the data analysis and manipulation tool pandas. Starting in Excel, she gathers all of compiled data and turns them into a table-based file format called CSV (for comma-separated values; the commas separate the data fields). Her code groups the datasets by fission fragment name to create graphs. Sears has produced nearly 200 of these graphs and is applying different regression techniques to model the relationship between the two sets of variables (fission fragment yield and incident particle energy). She analyzes each graph individually, looking for outliers in the data and seeing whether there’s an energy dependence and, if so, what that dependence is.

“The project is still in its preliminary stages, so we don’t know where this is going to go exactly,” said Sears. “But it’s useful in the context of knowing how the energy of incident particles—neutrons in this case—impacts what you’re likely to get out of the fission reaction. This information is important to nuclear reactor science and nuclear forensics.”

Getting up to speed

Though coding was required for Sears’ introductory engineering courses and she took a Python computer science class her freshman year, it hasn’t been a major part of her education.

“I picked up many of the technical aspects of coding, like pandas, while working on this subproject,” said Sears. “It’s been exciting to work on my Python skills for a real-world application instead of a class project.”

Nuclear science was even less familiar to Sears. When she started her internship, McCutchan gave her a textbook called Nuclear Structure from a Simple Perspective. Between that, the supportive culture at NNDC, and her strong background in math and physics, Sears vastly improved her knowledge of nuclear fission. Earlier this month, she gave a presentation about her two projects during Nuclear Data Week, an annual weeklong meeting attended by a small community of scientists working in the area of nuclear data.

“Caroline was the only undergraduate student making a presentation to the 194 participants of the meeting, in a setting usually focused on scientists that have been in the nuclear field for a long time,” said Mattera. “She did great!”

“Presenting my research at this scale where people are excited and interested in this subject matter gave a higher purpose to what I’ve been doing for the last few months,” said Sears. “It was great to see and interact with people who really care about nuclear data and are working on related projects. I feel a similar way as a jazz musician—there’s a small subset of the population who really appreciates it, who puts so much time, effort, heart, and soul into it.”

Sears, who will be continuing her internship through April, is uncertain about her plans for the future. But she knows she wants to do something challenging and meaningful. Currently, she’s interested in clean energy and electrical engineering.

“I would get bored if things were too easy,” said Sears. “It was an exciting prospect for me to come into this internship with very little technical background because I knew it would be on me to learn about nuclear fission, to stay engaged and motivated, especially considering I’d be off site. Interacting with a lot of motivated people during my internship has made me more likely to consider a career at a national lab.”