The Smiles Behind the Names

Users are family at Brookhaven Lab. Kathy Nasta and Grace Webster both make sure of that.

Between them, the two user administrators handle close to 2,500 users at the National Synchrotron Light Source (NSLS) and Center for Functional Nanomaterials (CFN). Both facilities are the backdrop to the NSLS/CFN Users Meeting, May 24-26, which is expected to draw about 400 participants. Spread over three-plus days, the program includes science talks, DOE and facility updates, and workshops on a range of topics, from self-assembly of soft and biomolecular materials to imaging catalysts in action.

This annual event, the biggest user meeting on site, is an opportunity for users to meet Webster and Nasta face to face. Most of the time, however, the two women do their business by e-mail and phone. 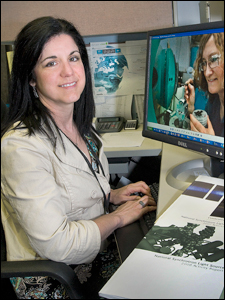 Nasta and her staff at NSLS handle about 2,200 users. They come from over 400 institutions around the world, mostly universities. By field of research, life sciences accounts for the bulk of beamline use, with materials science second. That trend became apparent about 10 years ago.

These statistics on user interest, origin, and publications are displayed on the NSLS website, collected for reviews by funding agencies: the Department of Energy (DOE) for NSLS operations, and other agencies like the National Science Foundation and the National Institutes of Standards and Technology that support users.

User administration is not all about statistical analysis, though. On the science side, transition to NSLS-II is the hot topic. Nasta is already working with NSLS-II experimental facilities head Qun Shen and others to coordinate the 2010 call for NSLS-II beamline proposals.

She also gets involved in quality-of-life issues, meeting routinely with the NSLS Users’ Executive Committee (UEC) chair Bruce Ravel and vice-chair Tony Lanzirotti. “The UEC’s big concern right now is housing -- quality and availability,” said Nasta. This was expressed to Lab management at the last UEC Town Meeting, in February 2010. “We would welcome a hotel on William Floyd Parkway,” she added.

“Users should be able to come here and get right to work and not be bothered by behind-the-scenes stuff,” Nasta said. It will take awhile to resolve the housing issue. In the meantime, even little things can improve a user’s experience. For example, if someone arrives on site at 2 in the morning, Nasta’s office is always willing to make special arrangements. 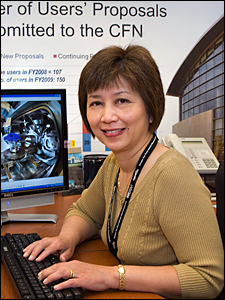 Webster echoes that attitude. Being a lot smaller, the CFN enjoys an especially close relationship with its users. “I’m almost like a mom,” said Webster, who is asked for advice on everything from transportation to official documents.

The CFN had 213 users in fiscal year 2009, mostly from American universities and national labs. Webster said they would exceed that number this year, as user growth has been quick and steady since the facility became fully operational in 2008.

Every user proposal is assigned to a particular CFN scientist or technical staff member. Webster noted that the nature of the work that goes on at the CFN is highly collaborative. She added, “The emphasis on interaction between CFN scientists and users is written into our user agreement. These things make a difference in the culture of the place.”

The CFN is one of five Nanoscale Science Research Centers (NSRCs) supported by DOE and placed at national labs around the country. “At the annual NSRC directors’ meeting, the user administrators discuss policies, share experiences, and do some benchmarking,” said Webster. The NSRC user offices also organize joint exhibits at special venues. They’re already planning a joint display at the first USA Science & Engineering Festival, scheduled in October on the National Mall in Washington.

The upcoming NSLS/CFN users’ meeting, although not attended by the general public, will have a strong educational component through a workshop on Bringing Big Science into the Classroom: BNL's NSLS and CFN. About 50 high-school teachers have signed up to learn how to use the internet to access NSLS and CFN so that their students can do actual scientific experiments on these world-class machines.

Users, teachers, students, the public, government agencies – many have a stake in NSLS and CFN. Webster and Nasta facilitate access to the machines, organize outreach activities to promote science at these facilities, and generally communicate with a broad range of interested parties -- smiling all the way.