How Low Can RHIC Go?

BNL’s Relativistic Heavy Ion Collider (RHIC) is a world-class particle accelerator, capable of colliding beams of particles at higher energies than at any other laboratory except CERN and Fermilab. So why are researchers excited about its recent low-energy runs, which at their lowest had 30 times less than RHIC’s maximum energy?

RHIC’s low-energy collisions — gold-gold collisions at 7.7, 11.5, and 39 GeV — are still powerful enough to break apart nuclear matter. Ion collisions at these energies create a super-hot, super-dense environment, where the bonds that hold normal nuclear matter can briefly be overcome. For far less than billionths of a second, the quarks and gluons — respectively, the building blocks of nuclei and the cement that holds them together — melt out of their bound states into a quark-gluon plasma, a new state of matter in the nuclear phase diagram.

A phase diagram is a map of the different states of matter (solid, liquid, gas, plasma) with the compass rose replaced by temperature along the vertical axis and pressure along the horizontal axis. Like maps, phase diagrams possess key landmarks, such as phase transition boundaries, where matter crosses from one state to another as it changes pressure and temperature.

RHIC’s melted nuclei all “refreeze,” but depending on their collision energy, they pass through different phase transition boundaries. During RHIC’s high-energy runs, experimenters observed that the phase transition was a smooth crossover, like gradually melting butter. But they predict that under conditions created during some low-energy collisions, this transition will become more violent and “lumpy,” the way boiling water becomes a roiling mix of hot water and steam bubbles. In this violent transition, the lumpiness is fractal-like: no matter how closely you zoom in, it is lumpy at every scale.

This smooth-to-lumpy shift in transition quality occurs at the “critical point.” The critical point is an important landmark of nuclear matter’s phase diagram, and its discovery is the objective of the RHIC low-energy program. Experiments search for this landmark by sweeping over the phase diagram map, colliding gold nuclei at various energies. Meanwhile, researchers study the collected data for signs that the critical point is nearby. 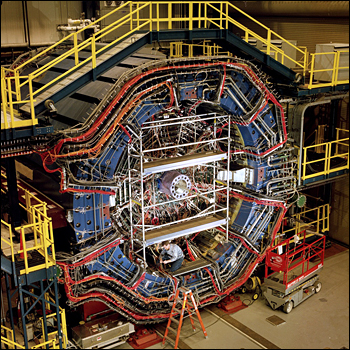 Detecting these signs requires the identification of particles created in RHIC collisions, the perfect task for the STAR detector. STAR personnel completed installation of a new time-of-flight (TOF) detector just in time for this low-energy run. The TOF detector, in conjunction with STAR’s time projection chamber, which measures particle trajectories, uncovers each particle’s energy, mass, and charge, revealing the particle type. Identifying fluctuations in the ratios of different particle types is one indication of how close conditions are to the critical point.

The PHENIX detector aids the critical point search by using its excellent ability to measure the photons, electrons, and positrons produced in RHIC collisions. These probes allow researchers to study the fluctuations in energy and momentum per particle, and yield information about the temperatures reached during the low-energy collisions, establishing the collisions in their proper place on the phase transition map. PHENIX also acquires data to measure particle ratios, allowing experiments at STAR and PHENIX to complement each other.

Collider-Accelerator Department (CAD) scientists and engineers, under the supervision of run coordinators Todd Satogata, Kevin Brown, and Greg Marr, have already overcome significant hurdles to create low-energy collisions as part of Run 10. At the lowest energy tested this year, 7.7 GeV, RHIC power supplies and magnetic fields were less than one fourth of their typical values, which created unique challenges. 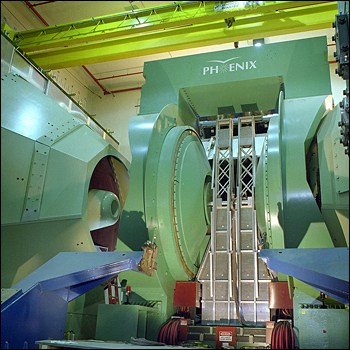 “We were never sure if the machine would be able to perform the way we needed it to,” commented Paul Sorensen, an experimentalist at STAR. “Watching the progression of the run was at times nerve-racking and full of suspense.”

The PHENIX team would agree. “We were concerned at the start of the low-energy run that the RHIC accelerator would be unable to meet our minimum requirements, since the machine was operating in a relatively untried configuration,” said Edward O’Brien, director of operations at PHENIX.

Lower-energy beams are inherently larger and less intense, decreasing the likelihood of collisions: RHIC produces more than 10,000 collisions per second at top energy, but only 3-5 per second at 7.7 GeV. These large, low-energy RHIC beams are also harder to weave through the same accelerator aperture used at high energies, like threading a needle with twine instead of silk thread. In addition, more particles at the edge of the beam scrape against the accelerator vacuum chambers, creating beam losses and unwanted experimental backgrounds.

Another low-energy program challenge is that some energies only permit collisions at one of the two experiments, STAR or PHENIX. This was the case for the 11.5 GeV run, where STAR acquired low-energy data while PHENIX commissioned another detector without collisions.

Overcoming these difficulties, RHIC completed its three-month low-energy run on June 9 with two days of collider tests at the lowest and most challenging energy.

“CAD consistently improved the performance of the machine, and in the end we nailed the number of events we needed,” said Sorensen. “From the start of the 7.7 GeV run to the end, CAD improved the event rate by a factor of 10. Because of this, we will be able to measure fluctuations and correlations in these events that we believe will tell us whether we are to the left or the right of the critical point.”

“RHIC performed exceptionally, delivering over double the data that we expected prior to the low-energy run,” agreed O’Brien. “The data we’ve obtained is excellent and should provide a great foundation for the critical point search.”

With the run’s conclusion, all of this year’s low-energy program goals were met or exceeded. Although more work lies ahead before the physicists can determine the existence and location of the landmark critical point, these successful runs already give the RHIC experimenters and accelerator team cause to celebrate.

The author acknowledges the assistance of Run 10 coordinator Todd Satogata.