This is an adapted version of a DOE highlight.

Searching for Signs of 'Glueballs' in Proton-Proton Smashups

Gluons, the particles that bind quarks, may also bind to one another. Scientists are searching for evidence of these globs of pure 'glue.' 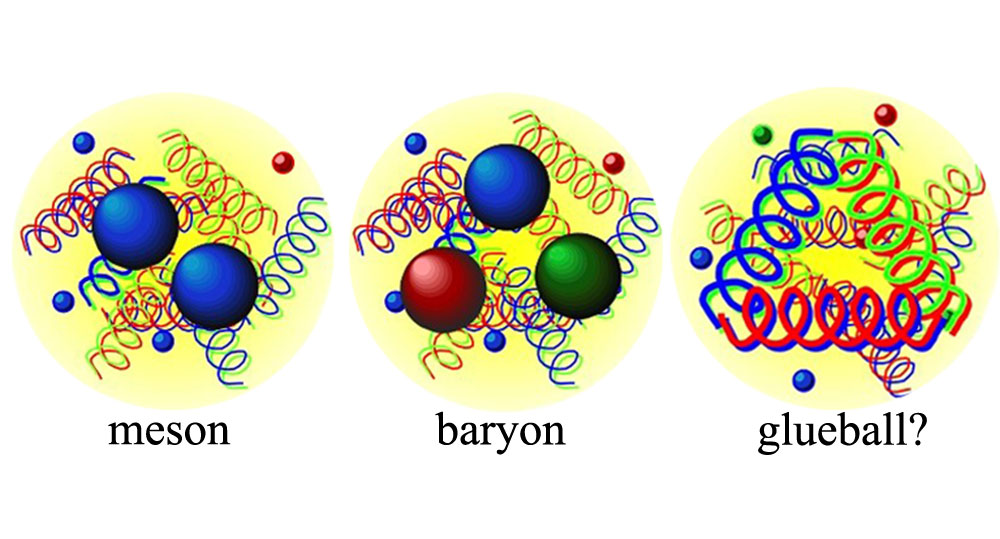 In particles made of two and three quarks (mesons and baryons), quarks are held together by gluons, carriers of the strong force (shown as springs). Theory also predicts "glueballs," particles made of gluons and quark-antiquark pairs (shown as dots). An experiment at the Relativistic Heavy Ion Collider searched for evidence by looking for decay products of glueballs. Credit: University of Glasgow

The subatomic particles that make up the universe interact in complex ways. In mesons and baryons, quarks and antiquarks are bound together by gluons, the carriers of the nuclear strong force. In the Standard Model of Particle Physics, gluons can also interact with each other. This means in principle that the universe should contain objects composed only of gluons in a sea of quark-antiquark pairs. However, scientists’ experiments have never definitively confirmed these hypothetical objects, called “glueballs.” Physicists searched for signs using the Relativistic Heavy Ion Collider (RHIC)—a U.S. Department of Energy (DOE) Office of Science user facility for nuclear physics research at DOE’s Brookhaven National Laboratory. Because glueballs decay very quickly, the scientists used the Solenoidal Tracker at RHIC (the STAR detector) to look for the decay products these glueballs are expected to transform into after their very short lifetime.

If scientists find clear evidence that glueballs exist, it would confirm a prediction of the theory describing the strong nuclear force. This force binds the quarks inside protons and neutrons and also holds together the nuclei of atoms that make up the visible matter in our universe. Finding clear evidence that glueballs do not exist would mean scientists need to revise the theory. Also, developing the ability to track the decay of possible glueballs lays the groundwork for using this technique at a future Electron-Ion Collider (EIC). This EIC will allow physicists to explore the strong force with precision experiments to reveal how gluons establish the properties of the building blocks of matter.

In proton collisions where the two scattered protons are intact after the collision, there is an increased chance that two gluons might have combined to form a glueball. Scientists used the STAR detector and other methods to identify collisions where intact protons continued on their forward journey and emerged at small angles on each side of the detector, while simultaneously searching for signs of the decay particles predicted for glueballs. Using statistical techniques and particle identification methods to analyze combinations of particles from millions of collisions, the scientists generated a type of “spectrum” of certain properties of the detected particles to see if it would match the spectrum expected from a decaying glueball. The approach is similar to using a light spectrum to determine a material’s chemical composition by comparing an observed spectrum with the known spectrum generated by each of the elements. The spectrum calculated from the RHIC observations revealed only hints of the glueballs’ signature, so the search will continue. However, the findings do show that the technique—measuring forward-moving protons and decay products—works and can be used to examine additional RHIC data and implemented at the EIC.

This project was funded by the Department of Energy Office of Science and benefited from the help and expertise of the STAR collaborators from the AGH University of Science and Technology and the Institute of Nuclear Physics in Cracow, Poland, whose participation in the STAR experiment is funded by the National Science Center of Poland.