Offers potential to broadly expand the benefit of immunotherapies 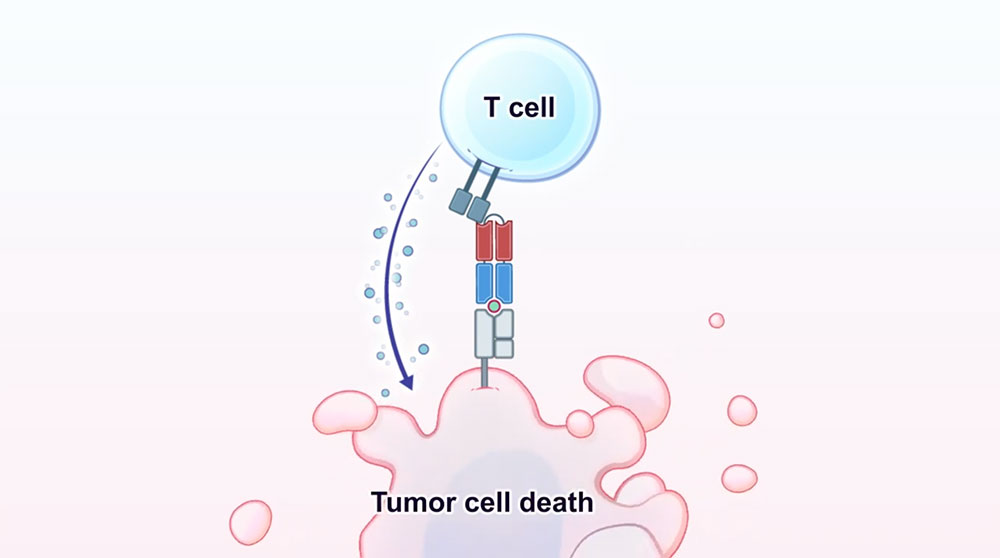 The researchers targeted their immunotherapy approach to alterations in the common cancer-related p53 tumor suppressor gene, the RAS tumor-promoting oncogene or T-cell receptor genes. They also tested the therapy on cancer cells in the laboratory and in animal tumor models. Their findings are reported in three related studies published March 1 in Science Immunology, Science and Science Translational Medicine.

The immunotherapy approach is targeted to alterations in the common cancer-related p53 tumor suppressor gene, the RAS tumor-promoting oncogene or T-cell receptor genes. It is in the form of bispecific antibodies, comprising one component that specifically recognizes cancer cells and another component that recognizes immune cells and brings the cancer cells and immune cells together to destroy tumor cells. Credit: Elizabeth Cook

Although common across cancer types, p53 mutations have not been successfully targeted with drugs. Genetic alterations in tumor suppressor genes often resulted in their functional inactivation.

Targeted drug therapies have been most successful against oncogenes, but most RAS gene mutations have been notoriously difficult to target. Instead of drugs, the researchers set out to target these gene alterations with newly-developed antibodies. 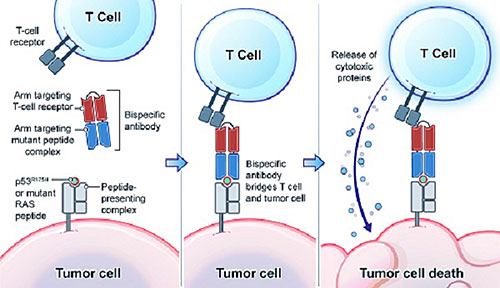 Conventional antibodies require an antigen target on the cell surface —most commonly a protein that looks like a foreign invader to the immune system. But the proteins produced by mutant oncogenes and tumor suppressor genes are inside the cells, out of reach by conventional antibodies. However, proteins are routinely degraded within cells, generating protein fragments called peptides.

“These peptides can be presented on the cell surface when complexed with the human leukocyte antigens (HLA) proteins,” says Katharine Wright, postdoctoral fellow at the Johns Hopkins University School of Medicine and a lead author on the Science Immunology paper. “Mutated proteins in cancer cells can also be degraded and generate mutant peptides presented by the HLA molecules. These mutant peptide HLA complexes serve as antigens and mark cancer cells as foreign to the immune system.”

The development of potent antibodies that specifically recognize the one amino acid difference between mutant proteins bound to HLA molecules is an extremely challenging task. To address this, the researchers used a five-step approach—combining state-of-the-art research technologies such as a mass spectroscopic, genetic, and X-ray crystallographic that analyze cells at the molecular level—and immunologic techniques to develop a therapeutic strategy that targets these antigens.

“This therapeutic strategy is dependent on a cancer containing at least one p53 or RAS alteration and the patient having an HLA type that will bind to the mutant peptide to present it on the cell surface,” says senior author Shibin Zhou Ph.D., associate professor of oncology and director of experimental therapeutics for the Ludwig Center at Johns Hopkins and a study leader.

Over the last five years, the researchers worked to overcome a variety of technical obstacles in an effort to develop antibodies that recognize only the mutant cancer gene fragments and not normal cells. To prove their antibody was specific to the mutant antigens, the researchers used CRISPR (clustered regularly interspaced short palindromic repeats) technology on cancer cells to change specific mutations in the target genes or disrupt the HLA type that is responsible for presenting the mutant peptides. The bispecific antibodies did not bring T cells to cancer cells when these genetic manipulations were made.

In the Science Translational Medicine paper, the researchers report that the powerful bispecific antibody approach they developed could also be used for the treatment of T-cell cancers. In animal models of T-cell cancers, the researchers showed that their approach selectively killed the cancerous T cells while sparing the majority of healthy T cells. Oncology fellow at Johns Hopkins University School of Medicine and lead author Suman Paul, M.B.B.S., Ph.D., was inspired to perform this study while treating a patient with this type of cancer.

“The patient had skin lesions so painful that clothing was intolerable, and like other patients with this disease, had a dismal prognosis,” says Paul, who emphasizes the need for better therapies. “Immunotherapies against B cell lymphomas have worked well with therapeutic agents such as CAR T cells and bispecific antibodies that wipe out both healthy and malignant B cells. These B cell-targeting treatments are effective because humans can tolerate the loss of healthy B cells. But a treatment approach that depletes both healthy and cancerous T cells would not work in T-cell cancer patients, because the healthy T cells are necessary for a functioning human immune system. Wiping out the healthy T cells along with the cancerous T cells would essentially result in a disease like AIDS.”

By targeting the cancer-associated T-cell receptors, the Science Translational Medicine study described a novel strategy that allowed killing of the cancerous T cells with loss of only a small fraction of healthy T cells.

Another type of immunotherapy, called checkpoint inhibition, works well in patients whose cancer has already drawn the attention of immune cells. Drugs called checkpoint inhibitors can successfully boost this immune response. Many cancers, such as pancreatic cancer and ovarian cancers do not attract immune cells. However, these cancers very frequently contain RAS and/or p53 mutations, providing the opportunity for new forms of immunotherapy not dependent on natural immune responses, says Zhou.

The researchers say one of the major benefits of this type of immunotherapy is that it has the potential to work broadly across cancer types, as long as the patient has the mutant p53 or RAS gene and a matching HLA type, and the therapeutic agent used should be relatively simple to produce.

“This is an off-the-shelf reagent, not a therapy requiring manipulation of individual patient’s own T cells, so it’s a much easier product from the manufacturing point of view. It could potentially be used for any patient who has the proper mutation and HLA type,” says Sandra Gabelli, Ph.D., associate professor of medicine at the Johns Hopkins University School of Medicine and study co-author.

The researchers say the next steps are to see if the strategy can be applied to other gene alterations in p53, KRAS, and other cancer driver genes.

The researchers are also concerned about off-target effects in which antibodies errantly bind to a similar target in a vital tissue or organ, a side effect that has been observed in other types of immunotherapies. Resistance to treatment is another concern the research team will study, as such resistance often occurs in patients treated with any therapy, including immunotherapy.

These findings build upon paradigm-shifting cancer genetics discoveries that emanated from the Ludwig Center laboratory, led by Bert Vogelstein, M.D., Clayton Professor of Oncology and Howard Hughes Medical Institute investigator, and Kenneth Kinzler, Ph.D., professor of oncology at Johns Hopkins University School of Medicine. In 1989, Vogelstein’s team revealed the p53 gene as the most commonly mutated gene in cancer. Mutations in the p53 gene are an important step in converting premalignant cells into cancer cells. As the first to reveal the genetic blueprint of cancer, the Ludwig Center team showed that cancers resulted from the gradual accumulation of genetic alterations in specific oncogenes and tumor suppressor genes, starting with colorectal cancer and then expanding their discoveries to a wide range of cancer types.

The authors have disclosed the following competing interests: The Johns Hopkins University has filed patent applications related to technologies described in this paper, on which Jacqueline Douglass, Emily Han-Chung Hsiue, Katharine Wright, Qing Wang, Andrew Skora, Michael Hwang, Brian Mog, Alexander Pearlman, Nickolas Papadopoulos, Kenneth Kinzler, Sandra Gabelli, Bert Vogelstein and Shibin Zhou are listed as inventors: HLA-restricted epitopes encoded by somatically mutated genes (US20180086832A1), MANAbodies and methods of using (US20200079854A1), MANAbodies targeting tumor antigens and methods of using (PCT/US2020/065617). Vogelstein, Kinzler and Papadopoulos are founders of Thrive Earlier Detection and hold equity in Exact Sciences. Kinzler and Papadopoulos are consultants to Thrive Earlier Detection. Vogelstein, Kinzler, Papadopoulos and Zhou are founders of, hold equity in, and serve as consultants to Personal Genome Diagnostics. Zhou holds equity in Thrive Earlier Detection, and has a research agreement with BioMed Valley Discoveries, Inc. Kinzler and Vogelstein are consultants to CAGE Pharma and hold equity in CAGE Pharma. Vogelstein is a consultant to and holds equity in Catalio. Nexus. Kinzler, Vogelstein, Zhou and Papadopoulos are consultants to and hold equity in NeoPhore. Papadopoulos is an advisor to and holds equity in CAGE Pharma. Zhou, Papadopoulos, Kinzler, and Drew Pardoll are founders of and hold equity in ManaT Bio. Chetan Bettegowda is a consultant to Depuy-Synthes and Bionaut Labs. The companies named, as well as other companies, have licensed previously described technologies related to our work from Johns Hopkins University. Vogelstein, Kinzler, Zhou, Papadopoulos and Bettegowda are inventors on some of these technologies. Licenses to these technologies are or will be associated with equity or royalty payments to the inventors as well as to Johns Hopkins University. The terms of all these arrangements are being managed by Johns Hopkins University in accordance with its conflict of interest policies. Wang is the founder and CEO of Complete Omics Inc. Maximillian Konig received personal fees from Bristol-Myers Squibb, Celltrion and Third Bridge. Drew Pardoll reports grant and patent royalties through institution from BMS, grant from Compugen, stock from Trieza Therapeutics and Dracen Pharmaceuticals, and founder equity from Potenza; being a consultant for Aduro Biotech, Amgen, Astra Zeneca (Medimmune/Amplimmune), Bayer, DNAtrix, Dynavax Technologies Corporation, Ervaxx, FLX Bio, Rock Springs Capital, Janssen, Merck, Tizona, and Immunomic-Therapeutics; being on the scientific advisory board of Five Prime Therapeutics, Camden Nexus II, WindMil; being on the board of directors for Dracen Pharmaceuticals.