The following briefing was originally published by the ATLAS experiment. In collaboration with Stony Brook University, the U.S. Department of Energy’s Brookhaven National Laboratory co-led the U.S. ATLAS Phase I Upgrade project, which included updates to the trigger system described in this briefing. Brookhaven Lab serves as the U.S. host laboratory for the ATLAS experiment and plays many additional roles in this international collaboration, including detector development, program and project management, and data storage and distribution. For more information on Brookhaven’s role in this work, contact Stephanie Kossman (skossman@bnl.gov, 631-344-8671).

The upgraded trigger will be able to spot a wider range of collision events while maintaining the same acceptance rate, opening ATLAS physics analyses to new possibilities 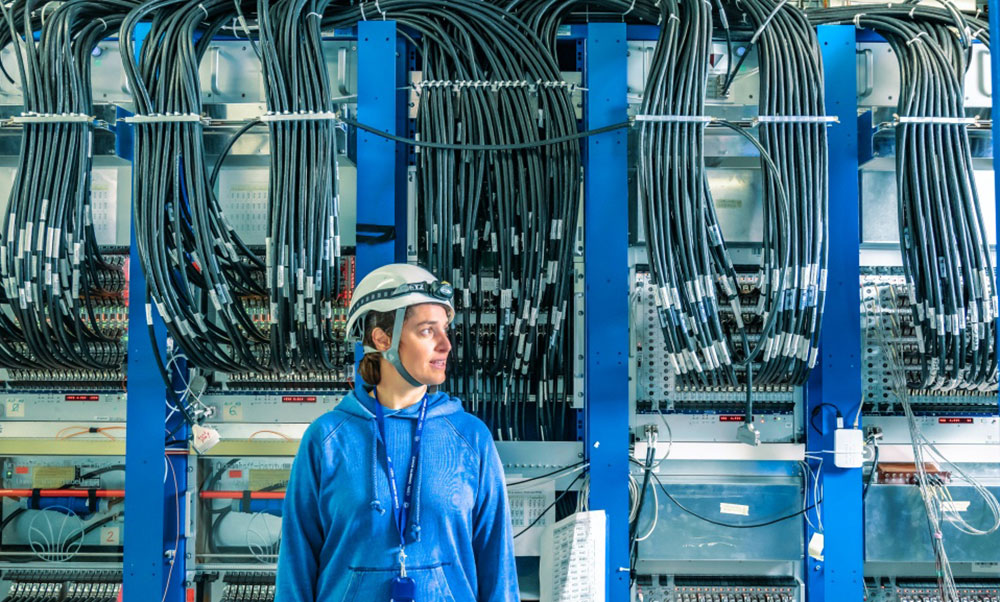 Member of the ATLAS trigger group (Silvia Franchino) poses in front of the trigger racks located in a service hall adjacent to the ATLAS experiment cavern. (Image: N. Caraban Gonzalez/CERN)

The Large Hadron Collider (LHC) generates hundreds of millions of particle collisions every second. It is impossible for ATLAS physicists to record all of these collision events - nor would they want to. Only a small fraction of collisions contain the rare physics processes that are interesting for study.

Separating the wheat from chaff is a two-level event-selection system called the “trigger”. It evaluates each collision in real time, looking for signs of particular physics “objects” such as the presence of energetic leptons, photons, “jets” (clusters of particles) or large missing energy (Figure 1). The trigger can’t just be quick: it has to efficiently discard uninteresting collision events while still remaining sensitive to signs of rare processes. Striking this difficult balance is essential, as the trigger is the first selection applied to every ATLAS physics analysis. 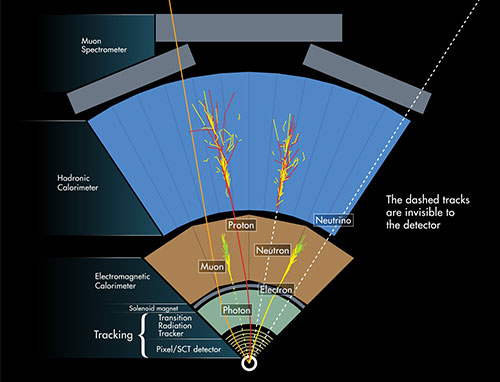 The ATLAS trigger system operated extremely successfully during Run 1 (2009–2013) and Run 2 (2015–2018) of the LHC. It is now undergoing various upgrades in preparation for the upcoming Run-3 data-taking period, which will see a moderate increase in the intensity and energy of collisions inside the experiment.

New hardware at the starting level

The first level of the ATLAS trigger is hardware-based, using custom-made electronics located directly on or around the detector. It uses select input from the Liquid Argon (LAr) calorimeter, Tile calorimeter and Muon Spectrometer to make a very quick decision within just 2.5 microseconds. Every second, the first-level trigger selects just 100,000 of the 40 million collision events generated by the LHC for further study.

During the second Long Shutdown of the LHC (LS2), ATLAS teams made significant improvements to the LAr calorimeter to increase the granularity of information used by the trigger. With better resolution, the trigger will be better able to reject background events. The calorimeter trigger now has modern large-scale FPGAs, allowing physicists to run more sophisticated algorithms to identify physics objects, and to calculate missing energy in the event with higher precision.

Figure 2 shows a comparison of the Run-2 electron trigger with the planned Run-3 trigger. The upgraded trigger will be able to select for a wider range of energies while maintaining the same acceptance rate, opening ATLAS physics analyses to new possibilities. Commissioning the new system will provide a challenge during the first few weeks and months of Run 3. Luckily, the Run-2 system remains available to run in parallel. 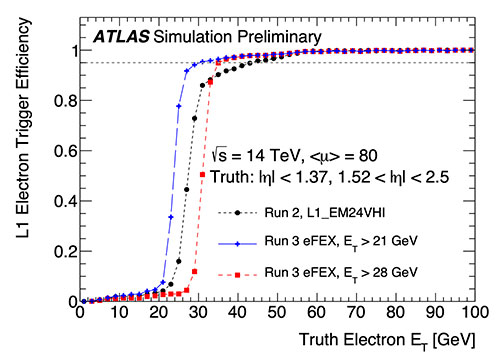 The Muon Spectrometer also has several new additions that will improve the ATLAS trigger. Teams have not only installed the New Small Wheel system, they’ve also placed additional resistive plate chambers (RPC-BIS78) to cover the boundary region between the barrel and end-cap part of the ATLAS detector. These new detectors will improve the trigger’s ability to correctly identify muons and will reduce the rate by a factor of 2.

The topological trigger, a system that was installed during Run 2, has also undergone a hardware upgrade. Its refined kinematic measurements of muons and other objects allow for more sophisticated event selections. For example, physicists can select for specific invariant masses at the first trigger level and thus further reduce the data rate.

Once the first level is passed, events are sent to the software-based High Level Trigger (HLT) to be analysed in more detail. The HLT operates from a large computing farm of about 50,000 processing applications. In just 200 to 400 ms, the HLT’s sophisticated algorithms will run a detailed analysis on specific regions of the detector, selecting about 3,000 events per second and passing them on to permanent storage for further analysis by the various physics groups.

During LS2, the HLT’s underlying framework was completely rewritten in order to execute trigger algorithms within the multi-threaded software framework AthenaMT, sharing common features between the trigger software and the software used for physics analyses. Physicists also implemented several new-and-improved selection algorithms and strategies, improving the reconstruction of objects in the detector and probing newly-accessible parameters for physics beyond the Standard Model. An example is shown in Figure 4, which shows the transverse energy resolution for tau leptons versus the average number of pileup interactions. The comparison shows the resolutions for two different tau-energy-scale calibrations, the one used throughout Run-2 and one developed towards the end of Run-2, which is based on a boosted regression tree.

Figure 3: The efficiency for Level-1 single-muon triggers as a function of the transverse momentum (pT) of the reconstructed muon in the end-cap region for various transverse momentum thresholds. Higher transverse momentum granularity in the Level-1 muon end-cap region will lead to higher Level-1 di-muon invariant mass resolutions, improving the B-physics trigger selections. (Image: ATLAS Collaboration/CERN) Figure 4: Transverse energy resolution of hadronically-decaying tau leptons reconstructed in the HLT. Resolutions are shown as a function of the average number of pileup interactions, for two different Tau Energy Scale (TES) calibrations and for taus leaving one track (1-prong) and 3 tracks (3-prong) in the detector. The baseline calibration was used throughout Run-2 data taking. The improved MVA calibration is based on a boosted regression tree and was used to collect data in the last few months of Run 2. (Image: ATLAS Collaboration/CERN)

These improvements will be especially important for Run 3 of the LHC, which will require significant HLT resources to be dedicated to computationally-intense particle tracking. The changes help optimise the HLT’s use of computing resources, both in terms of computing power and memory consumption. For example, by employing sophisticated machine-learning classifiers in the trigger software, the fast-tracking algorithm has been sped up by more than a factor of two.

All the new trigger hardware and software will be put to a test when the LHC will start the data-taking period in 2022. While a big chunk of the commissioning of the individual hardware and validation of the software can and is being carried out already, the real challenge will be the combined operation of the ATLAS detector and all its new components. Exciting and challenging times ahead!