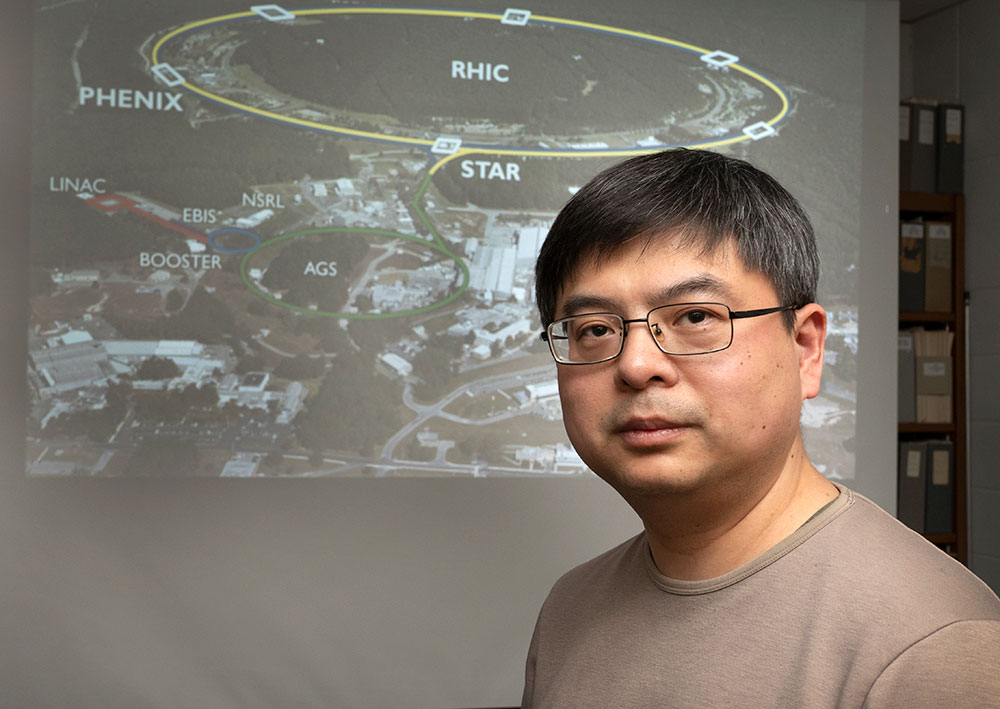 Gang Wang of the Collider-Accelerator Department at Brookhaven Lab

A new era of discovery awaits.

The EIC will be a state-of-the-art facility, built at the U.S. Department of Energy's (DOE) Brookhaven National Laboratory through a partnership among the DOE, Brookhaven, and the Thomas Jefferson National Accelerator Facility in Virginia. New York State is providing strong support for the project.

With electrons colliding with ions at the EIC, scientists will peer inside the nucleus’ protons and neutrons. Three dimensional images from the EIC's detectors will reveal the internal arrangement of quarks and gluons in every proton and neutron. What scientists learn from collisions at the EIC—and from building the facility itself—could power technologies of tomorrow.

One technology that scientists are developing for the EIC is called "coherent electron cooling." It could increase the number of particle collisions by packing ions into tighter, denser bunches. As the development of coherent electron cooling advances, the next step is to demonstrate its capabilities at the Relativistic Heavy Ion Collider (RHIC), the particle collider currently operating at Brookhaven Lab.

On Wednesday, March 23, join Gang Wang of Brookhaven's Collider-Accelerator Department for the 525th Brookhaven Lecture. His talk, titled "A Booster for More Collisions at the Electron-Ion Collider: Coherent Electron Cooling and Its Experimental Test at RHIC," will be held at 4 p.m. on Zoom.

During his talk, Wang will give an overview of the EIC and the science questions it will help address. He will also discuss coherent electron cooling, how it works, and how it is being developed.

Gang Wang is a physicist in the Collider-Accelerator Department at Brookhaven Lab. He joined Brookhaven Lab as a research associate in 2004.

Wang earned a Ph.D. in physics from Stony Brook University in 2008. His thesis was on coherent electron cooling—the topic of this Brookhaven Lecture. Wang earned his master's degree in physics at Peking University in Beijing in 2001 and a bachelor's at Sichuan University, Chengdu in China's Sichuan Province in 1998.

Wang is an adjunct associate professor at Stony Brook University, where he co-teaches a course on advanced accelerator physics. He is also a referee for Physical Review Letters, Physical Review Accelerators and Beam, and Nuclear Instruments and Methods. He also reviews Small Business Innovation Research (SBIR) proposals for DOE.