The following announcement describes an event to celebrate the 10th anniversary of the 2012 Higgs boson discovery by the ATLAS and CMS experiments at the Large Hadron Collider (LHC), located at Europe’s CERN laboratory. The U.S. Department of Energy’s Brookhaven National Laboratory, which plays many roles in the ATLAS collaboration, is sharing this announcement on behalf of the U.S. LHC User Association. More information about this event, including a link to register, can be found here. 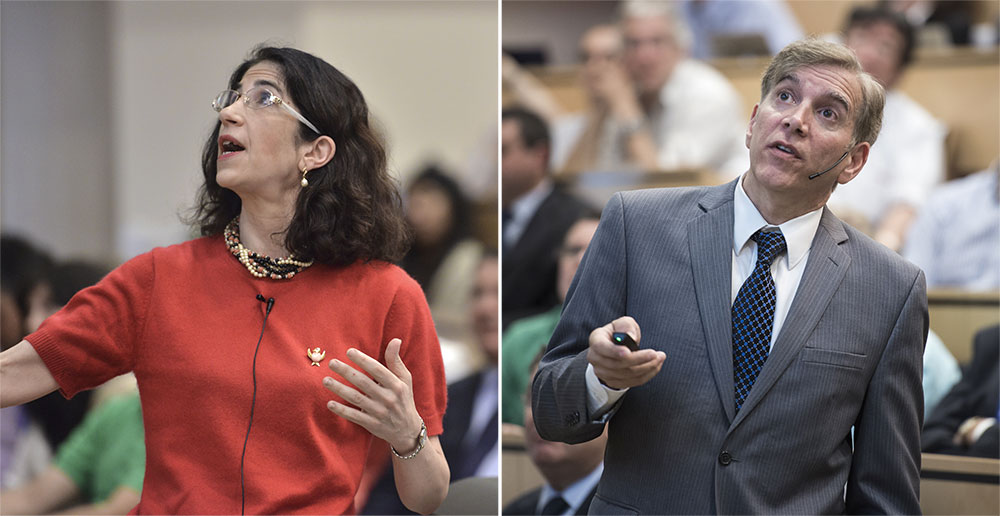 Fabiola Gianotti and Joseph Incandela at the July 4, 2012, presentation of results declaring the discovery of the Higgs boson at CERN. (Photos courtesy of CERN)

For the 10th anniversary of the Higgs discovery, the U.S. LHC Users Association (USLUA) will be joining together with U.S.-CMS and U.S.-ATLAS and the U.S. high-energy physics (HEP) community, along with distinguished guests, to celebrate this milestone in the history of science.

Given the excellent progress of the LHC commissioning and preparations of the experiments, we expect to be close to the first days of Run3 (2022-2025) data taking at 13.6 tera-electron volts (TeV).

The program includes a keynote address by Joseph Incandela, Vice Chancellor for Research at the University of California, Santa Barbara. As then-spokesperson of CMS, Incandela presented the CMS results [in 2012], along with now-CERN Director Fabiola Gianotti, who presented the ATLAS results. [Those results] were the basis of the Higgs boson discovery announced on July 4, 2012*.

The program also includes virtual visits to the LHC, ATLAS, and CMS, and remarks from groups at the sites.

One of the goals of this celebration is to recall the great impact of the discovery both within and beyond the HEP community. We recall at the time, amidst the excitement, that this was considered by many as a 21st century achievement of humanity

Let us celebrate both in that spirit, and as an apt moment to look forward to the next round of discoveries.