The following news release was originally issued by the University of Michigan. A team of researchers developed new open-source software that enables researchers to see materials in 3D while they're still on the electron microscope. The team collaborated with Marcus Hanwell, a software architect and group leader at the National Synchrotron Light Source II (NSLS-II), a U.S. Department of Energy (DOE) Office of Science user facility at DOE’s Brookhaven National Laboratory. For more information on Brookhaven’s role in this research, contact Cara Laasch (laasch@bnl.gov, 631-344-8458).

A real-time reconstruction of platinum nanoparticles on a carbon nanowire produced with the weighted back projection algorithm in tomviz.

Computer chip designers, materials scientists, biologists and other scientists now have an unprecedented level of access to the world of nanoscale materials thanks to 3D visualization software that connects directly to an electron microscope. It enables researchers to see and manipulate 3D visualizations of nanomaterials in real time.

Developed by a University of Michigan-led team of engineers and software developers, the capabilities are included in a new beta version of tomviz, an open-source 3D data visualization tool that’s already used by tens of thousands of researchers. The new version reinvents the visualization process, making it possible to go from microscope samples to 3D visualizations in minutes instead of days.

In addition to generating results more quickly, the new capabilities enable researchers to see and manipulate 3D visualizations during an ongoing experiment. That could dramatically speed research in fields like microprocessors, electric vehicle batteries, lightweight materials and many others.

“It has been a longstanding dream of the semiconductor industry, for example, to be able to do tomography in a day, and here we’ve cut it to less than an hour,” said Robert Hovden, assistant professor of materials science and engineering at U-M and corresponding author on the study published in Nature Communications. “You can start interpreting and doing science before you’re even done with an experiment.”

Hovden explains that the new software pulls data directly from an electron microscope as it’s created and displays results immediately, a fundamental change from previous versions of tomviz. In the past, researchers gathered data from the electron microscope, which takes hundreds of two-dimensional projection images of a nanomaterial from several different angles.

Next, Hovden and colleagues took the projections back to the lab to interpret and prepare them before feeding them to tomviz, which would take several hours to generate a 3D visualization of an object. The entire process took days to a week, and a problem with one step of the process often meant starting over.

The new version of tomviz does all the interpretation and processing on the spot. Researchers get a shadowy but useful 3D render within a few minutes, which gradually improves into a detailed visualization.

“When you’re working in an invisible world like nanomaterials, you never really know what you’re going to find until you start seeing it,” Hovden said. “So the ability to begin interpreting and making adjustments while you’re still on the microscope makes a huge difference in the research process.”

This rendering of platinum nanoparticles on a carbon support shows how tomviz interprets microscopy data as it's created, resolving from a shadowy image to a detailed rendering.

The sheer speed of the new process could also be useful in industry—semiconductor chip makers, for example, could use tomography to run tests on new chip designs, looking for failures in 3D nanoscale circuitry far too small to see. In the past, the tomography process was too slow to run the hundreds of tests required in a commercial facility, but Hovden believes tomviz could change that.

Hovden emphasizes that tomviz can be run on a standard consumer-grade laptop. It can connect to newer or older models of electron microscopes. And because it’s open-source, the software itself is accessible to everyone.

“Open-source software is a great tool for empowering science globally. We made the connection between tomviz and the microscope agnostic to the microscope manufacturer,” he said. “And because the software only looks at the data from the microscope, it doesn’t care whether that microscope is the latest model at U-M or a 20-year-old machine.” 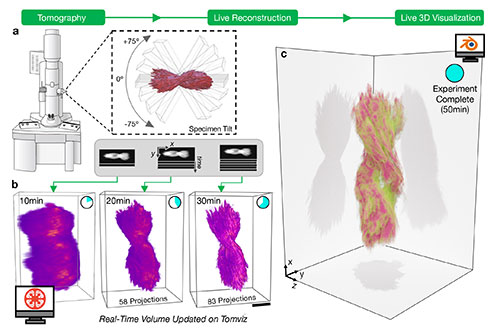 This diagram illustrates the process of pulling two-dimensional projection images from an electron microscope and rendering them into a three-dimensional visualization.

To develop the new capabilities, the U-M team drew on its longstanding partnership with software developer Kitware and also brought on a team of scientists who work at the intersection of data science, materials science and microscopy. At the start of the process, Hovden worked with Marcus Hanwell of Kitware and Brookhaven National Laboratory to hone the idea of a version of tomviz that would enable real-time visualization and experimentation.

Once the algorithms were complete, Cornell University professor of applied and engineering physics David Muller and Peter Ericus, a staff scientist at the Berkeley Lab’s Molecular Foundry, worked with Hovden to design a user interface that would support the new capabilities.

Finally, Hovden teamed up with materials science and engineering professor Nicholas Kotov, undergraduate data scientist Jacob Pietryga, biointerfaces research fellow Anastasiia Visheratina and chemical engineering research fellow Prashant Kumar, all at U-M, to synthesize a nanoparticle that could be used for real-world testing of the new capabilities, to both ensure their accuracy and show off their capabilities. 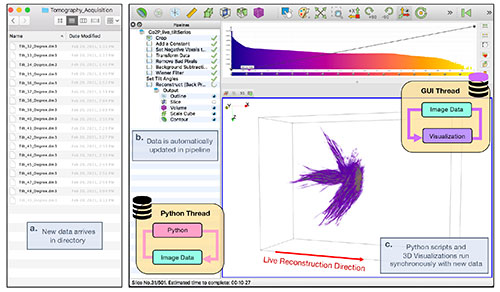 They settled on a nanoparticle shaped like a helix, about 100 nanometers wide and 500 nanometers long. The new version of tomviz worked as planned; within minutes, it generated an image that was shadowy but detailed enough for the researchers to make out key details like the way the nanoparticle twists, known as chirality. About 30 minutes later, the shadows resolved into a detailed, three-dimensional visualization.

The source code for the new beta version of tomviz is freely available for download at GitHub. Hovden believes it will open new possibilities to fields beyond materials-related research; fields like biology are also poised to benefit from access to real-time electron tomography. He also hopes the project’s “software as science” approach will spur new innovation across the fields of science and software development.

“We really have an interdisciplinary approach to research at the intersections of computer science, material science, physics, chemistry,” Hovden said. “It’s one thing to create really cool algorithms that only you and your graduate students know how to use. It’s another thing if you can enable labs across the world to do these state-of-the-art things.”

Kitware collaborators on the project were Chris Harris, Brianna Major, Patrick Avery, Utkarsh Ayachit, Berk Geveci, Alessandro Genova and Hanwell. Kotov is also the Irving Langmuir Distinguished University Professor of Chemical Sciences and Engineering, Joseph B. and Florence V. Cejka Professor of Engineering, and a professor of chemical engineering and macromolecular science and engineering.
“I’m excited for all the new science discoveries and 3D visualizations that will come out of the material science and microscopy community with our new real-time tomography framework,” Schwartz said.