The following news release was issued by the U.S. Department of Energy (DOE), announcing $15 million in project funding as part of the Exploratory Research for Extreme-Scale Science program, which seeks to explore new approaches for enhancing scientific computing. Ning Bao, a quantum computational scientist with Brookhaven Lab’s Computational Science Initiative, will lead one of the 22 awarded EXPRESS projects, Novel Quantum Algorithms from Fast Classical Transforms. The project aims to progress novel quantum algorithm design using classical mathematical transforms, i.e., functions originally applied in one domain used in another. Such transforms often help solve difficult equations and can be mapped back (transformed) to the original function. Fast classical transforms, or FCTs, will be assessed to determine if they: 1) can be converted into novel quantum transforms and 2) have the potential for a speed advantage over state-of-the-art classical algorithms. Finding quantum analogues for FCTs can lead to more algorithms for quantum simulation, impacting diverse DOE missions in areas such as physics, chemistry, mathematics, and cryptography. 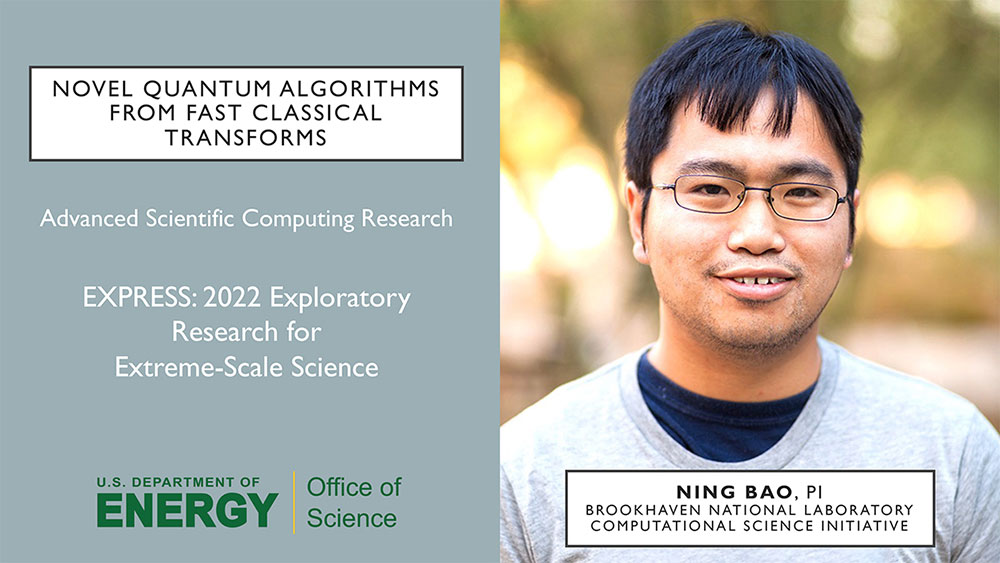 The 22 projects were selected by competitive peer review under the DOE Funding Opportunity Announcement for “EXPRESS: 2022 Exploratory Research for Extreme-Scale Science,” sponsored by the Office of Advanced Scientific Computing Research within the Department’s Office of Science.

Total funding is $15 million for projects lasting up to two years in duration, with $12 million in Fiscal Year 2022 dollars and outyear funding contingent on congressional appropriations. The list of projects and more information can be found here.