The following story on new findings from the groundbreaking MicroBooNE experiment was originally published by the U.S. Department of Energy’s (DOE) Fermi National Accelerator Laboratory. It follows an announcement of first results in October 2021. DOE’s Brookhaven National Laboratory has been a major collaborator on the MicroBooNE experiment since its inception and played leading roles in the latest findings described in this story. This long-awaited finding was directly enabled by software called Wire-Cell, a neutrino event-reconstruction toolkit developed at Brookhaven Lab. For more information about Brookhaven Lab’s contributions to this research, contact: Karen McNulty Walsh, kmcnulty@bnl.gov, 631-344-8350.

The MicroBooNE collaboration at Fermilab has released a new analysis of their neutrino data. The result provides constraints on a model that assumes the existence of a sterile neutrino to explain anomalies in neutrino measurements by other experiments

By Lauren Biron and Kurt Riesselmann 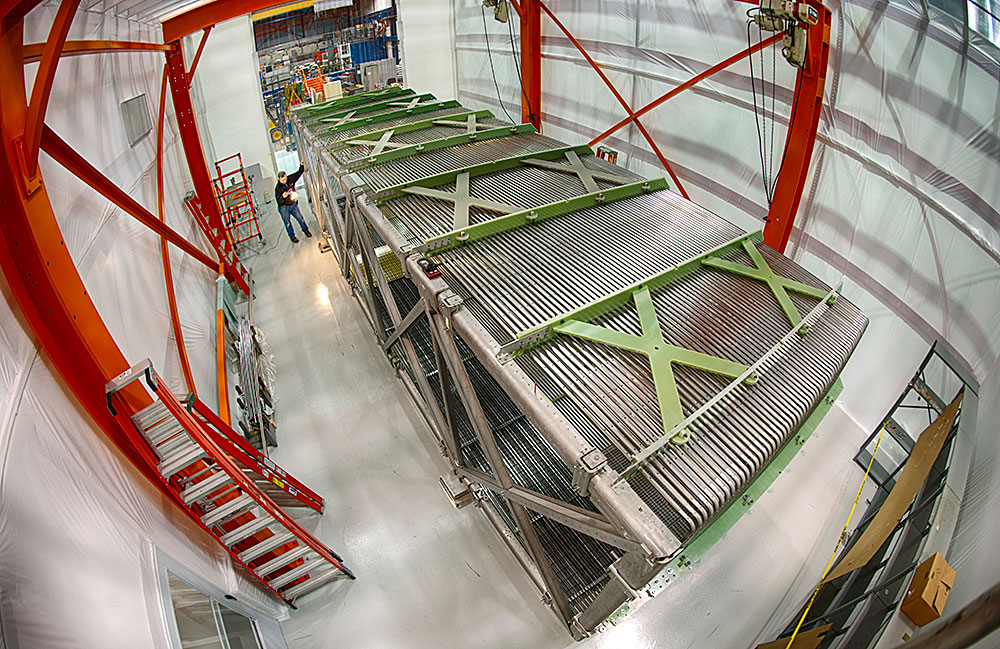 A new result from the MicroBooNE experiment at the U.S. Department of Energy’s Fermi National Accelerator Laboratory probes the Standard Model—scientists’ best theory of how the universe works. The model assumes there are three kinds of neutrinos. Yet for more than two decades, a proposed fourth kind of neutrino has remained a promising explanation for anomalies seen in earlier physics experiments. Finding the theorized sterile neutrino would be a major discovery and radical shift in our understanding of the universe.

The new analysis compares the experiment’s data to a model with a fourth, sterile neutrino to test their compatibility. MicroBooNE scientists found no evidence of the long-sought sterile neutrino in the parameter range explored.

The possibility that sterile neutrinos caused the yet-unexplained anomalies reported by previous experiments still remains. These include measurements by the Liquid Scintillator Neutrino Detector at Los Alamos National Laboratory, the MiniBooNE experiment at Fermilab, and several radiochemical and nuclear reactor neutrino experiments.

“Neutrinos continue to be one of the strangest and most interesting particles out there. They are one of our best opportunities to study new physics beyond the Standard Model.”

“This is the first time we’ve checked whether our data fit a specific sterile-neutrino model,” said Matt Toups, a Fermilab scientist and co-spokesperson for MicroBooNE. “We’ve excluded large sections of the sterile neutrino parameter space allowed by LSND. But there are still corners where a sterile neutrino could potentially be hiding.”

While the most basic version of a sterile neutrino is becoming less likely, other, more subtle types of physics might be at play. For example, there could be a sterile neutrino working in combination with something else, such as dark matter. Or there could be completely different explanations for the anomalies.  Unexplained physics related to the Higgs boson or other physics beyond the Standard Model could be the reason.

“In this work, we found an important interplay between the neutrino appearance and disappearance, which was not considered in the previous experimental work. This has important consequences in the search result,” said Xiangpan Ji, a postdoctoral researcher at DOE’s Brookhaven National Laboratory, who is one of the co-leaders of this analysis.

Like the 2021 results, the new finding uses only half of MicroBooNE’s dataset. Researchers will continue to look for potential sterile neutrino signals in future analyses. They also will expand their analyses to the full dataset.

The 170-ton MicroBooNE neutrino detector collected data from 2015 to 2021. It recorded hundreds of thousands of spectacularly detailed 3D images of neutrino events. Close to 200 collaborators from 39 institutions in five countries built and ran the experiment and are now working on the data analysis. The collaboration expects to release the first results from the full dataset in 2023. 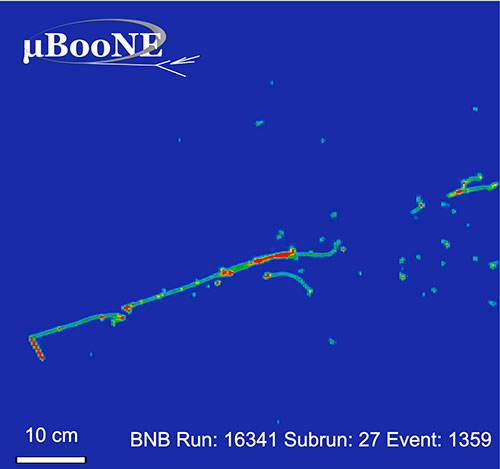 MicroBooNE is one of three particle detectors that make up Fermilab’s Short-Baseline Neutrino Program. ICARUS and the Short-Baseline Near Detector are the other two detectors. Together, they enable the detailed exploration of neutrino properties. In particular, they examine neutrino oscillations at low energies and short distances. Scientists hope that the combined measurements of these three detectors will completely resolve the anomalies in neutrino measurements seen by LSND and MiniBooNE.

Next year, MicroBooNE scientists also expect to report on sterile neutrino models using data from two beams of neutrinos with different energies, a unique feature of the Fermilab accelerator complex. So far, this MicroBooNE result has relied on neutrinos provided by Fermilab’s Booster Neutrino Beam, produced by protons with energy of 8 billion electron volts (GeV). But the MicroBooNE detector also recorded interactions of neutrinos from Fermilab’s Main Injector accelerator, produced by 120-GeV protons.

“Our ability to explore sterile neutrinos and rare interactions will be enhanced when we add in the data from Fermilab’s Main Injector neutrino beam,” said Hanyu Wei, professor of physics at Louisiana State University and a co-leader of the sterile-neutrino analysis. “The interplay between the two beams’ data will be interesting, not just more statistics.”

In addition to weighing in on the sterile neutrino question, MicroBooNE will also search for other phenomena beyond the Standard Model and provide precision measurements of how neutrinos interact with matter.

“Neutrinos continue to be one of the strangest and most interesting particles out there. They are one of our best opportunities to study new physics beyond the Standard Model,” said Justin Evans, scientist at the University of Manchester and MicroBooNE co-spokesperson. “There is so much incredible neutrino physics that MicroBooNE can do. We’re excited to see what else is waiting for us in the data.”