The instruments' names celebrate diversity and inclusion while also serving as a nod to the LBMS' primary capital funding source, NY state 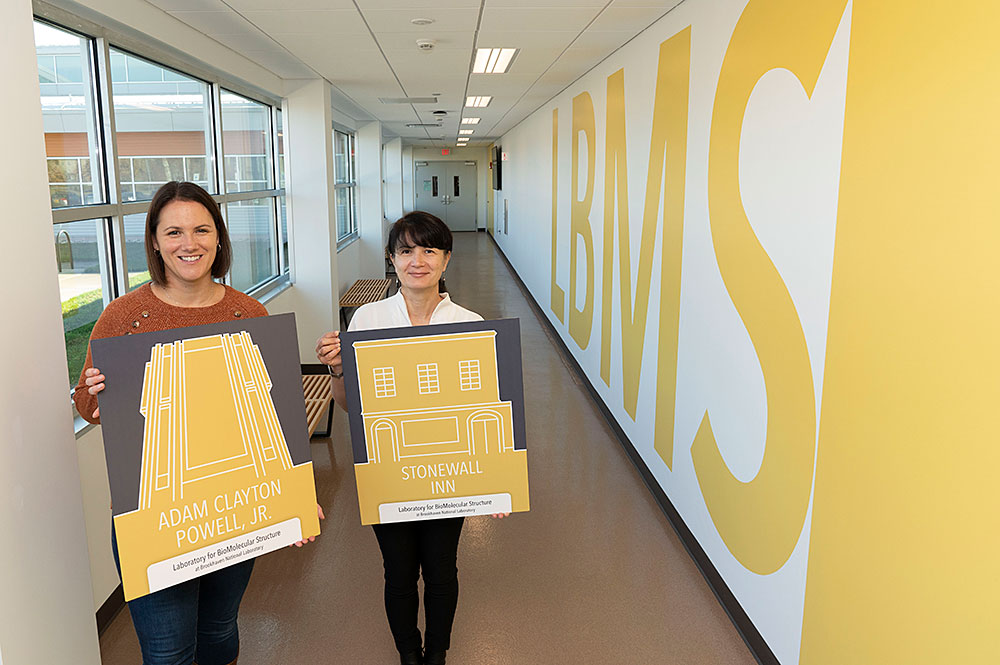 The newest research facility at the U.S. Department of Energy’s Brookhaven National Laboratory, the Laboratory for BioMolecular Structure (LBMS), has named its three powerful new microscopes after important landmarks in New York State. The names celebrate New York, which provided the bulk of the funding to construct the facility, as well as its spirit of acceptance, diversity, and equality.

The LBMS, now in regular operation, is a cryo-electron microscopy (cryo-EM) center that provides state-of-the-art life-sciences imaging capabilities for studying the building blocks and behaviors of living organisms. As a user facility available to researchers across the world, the LBMS offers access to advanced cryo-EM microscopes that make it possible to study complex biological samples, such as proteins, as well as the structures of cells and tissue.

The Empire High-end Electron Microscope (EM) is named for the iconic Empire State Building; the Powell Screening EM is named for the Adam Clayton Powell, Jr. State Office Building, located in the Harlem neighborhood of New York City (NYC), which honors the first Black congressman from New York; and the Stonewall Screening EM is named for the Stonewall National Monument (formerly the Stonewall Inn), a key LGBQTIA+ landmark in the NYC’s Greenwich Village where protests against police brutality in 1969 by members of the gay community ultimately launched the gay-rights movement as we know it today. Each of these three buildings is also represented by artwork on the interior walls of the LBMS. 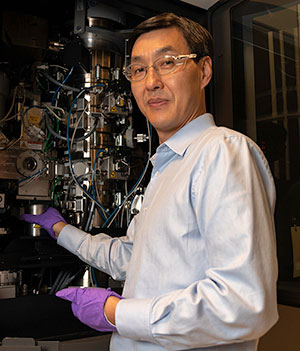 The LBMS offers researchers a suite of world-class capabilities and tools,” said Liguo Wang, the facility’s scientific operations director. “All three microscopes are designed for performance and productivity across a wide range of samples and applications, such as 2D and 3D imaging of molecules, complexes, organelles, and cells. They are ideal for single particle analysis and tomography studies. The Powell and Stonewall are mainly employed for sample screening and preliminary data collection, and the Empire is reserved for high-resolution data collection with screened samples. The three cryo-TEMs form a complete flow from sample screening to high-resolution data collection.”

“We wanted to give the microscopes a naming scheme that would be long-lasting and also memorable,” said Laasch. “After we chose the Empire State Building, we wanted to identify landmarks that are important to underrepresented groups.”

The team reached out to Brookhaven’s Pride Alliance and African American Advancement Group (AAAG) for their advice and input.

“The Stonewall Inn and the Powell Building were suggested by the Pride Alliance and the AAAG, respectively, and we agreed those were excellent choices,” said McSweeney. “Tiffany came up with the line-art graphics and how to execute them, and Ana had really good ideas about design and color. It was a definite team effort.”

Ranjbar had a major role in the planning and architecture of the LBMS building, leading pre-conceptual design efforts of the structure and exterior. She also had a large hand in the interior design.

“Our goal for the interior was to make it uplifting using architectural ‘super graphics’ and colorful outlines of each landmark,” she said. “All in all, it was a very rewarding project with a great group of people!”

Bowman added, “This project was a pleasure to work on, and I think the results speak for themselves. I love how we came together to create a space that represents the best of Brookhaven: science, community, and inclusivity.”

Johnson confirmed the importance of the team aspect. “This project is an example of how diverse teams can yield better results,” he said. “When the LBMS building was nearing completion, Sean thought that we could do better than white walls. Ana suggested ideas that were much more interesting, and then Tiffany and Cara helped flesh out those ideas. We then consulted with the Pride Alliance and AAAG to find out what would be meaningful to them.”

Theresa Grimaldi, an operator with the Medical Isotope Research and Production team in Brookhaven’s Collider-Accelerator Department, represents the Pride Alliance.

“It is so heartwarming to see BNL naming one of their three new microscopes Stonewall after such an important piece of LGBTQIA+ history,” she said. “It makes a statement to the community that you are seen, affirmed, and celebrated here.”

The AAAG issued a statement via its President Emeritus, Mary Rogers:

“The AAAG was honored to be included in the naming of one the microscopes at LBMS. The name of Adam Clayton Powell Jr. was selected. AAAG was thrilled to have such an amazing representation of the Black/African American demographic. Adam Clayton Powell Jr.’s legacy has special significance to all as he was the first African American elected to Congress from New York. He used his position to fearlessly crusade for advancing diversity, equity, and inclusion. An iconic New York State landmark, the Adam Clayton Powell Jr. State Office Building stands as a legacy of his commitment, tenacity, and brilliance. We are forever indebted to his pivotal role, championing, and dedication.”

The future fourth microscope at the LBMS will be the Liberty, named for the Statue of Liberty, perhaps the most famous symbol of New York.

Operation costs of the facility are covered by DOE’s Biological and Environmental Research program.