IN HIS WORDS: Samuel Stanley 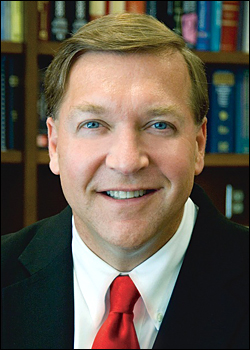 Samuel L. Stanley Jr., M.D., has been President of Stony Brook University (SBU) since July 2009 and is the Chair of the Board of Brookhaven Science Associates LLC (BSA), which manages and operates BNL for DOE’s Office of Science. Stanley received his M.D. from Harvard Medical School and became one of the nation’s highest recipients of support from the National Institutes of Health for his research focusing on enhanced defense against emerging infectious diseases. The author and co-author of many peer-reviewed articles and scholarly publications, he holds several patents and is credited with substantially advancing the research enterprise of Washington University, where he was Vice Chancellor prior to joining SBU.

SBU is the largest academic user of BNL’s facilities, with 600 faculty and staff who hold guest appointments at the Lab. In addition, 60 SBU graduate students are working on their thesis research at BNL, more than 100 BNL staff members have adjunct appointments at SBU, and 10 percent of BNL staff are SBU alumni.

After more than a year of working closely with BNL, Stanley is enthusiastic about developing the SBU/BNL relationship further. In a telephone conversation with The Bulletin he shared some of his thoughts on this topic.

“We’re very interested in continuing to collaborate with Brookhaven in every way we can,” Stanley said. “The Lab is an extraordinary resource for Stony Brook and, of course, for the nation, but to have it in our backyard is amazing. As you know, we have the opportunity to help manage it with Battelle through BSA, which I think has strengthened our relationship.”

On building on already strong links between SBU and BNL staff, including sharing outstanding research and teaching talent to benefit both institutions:

“As we develop our strategic academic plan for Stony Brook, we are thinking about ways in which to expand our partnership with BNL. We have made a commitment to energy as a main focus, where BNL is obviously key in a number of areas. Another major focus for both of us is in biological imaging. With NSLS-II coming on board and exciting neuroimaging at BNL right now as well, we see tremendous opportunities. I am asking people on our staff, when searching for faculty, to involve BNL staff on search committees, which is an important way to get input. We should be thinking about getting people who complement existing expertise at both SBU and BNL, so we can grow without risking duplication.

“I think there are tremendous opportunities for further growth. Funding has been scarce here for two years and the same may hold true all over the country soon, so sharing talent could be a critical part of what we do moving forward.”

On potential collaboration in the field of medical imaging:

“We’re working very hard at the highest levels to help support in any way we can what’s been and is now an outstanding imaging group at BNL. We are looking to provide more of those services. We have a new Dean of our School of Medicine, Ken Kaushansky, and one of his goals is to build collaborations with BNL and Cold Spring Harbor, looking to find ways to provide clinical and translational research outlets for a lot of the things you’re interested in doing. We see this as important for the future. The outstanding work done at BNL in studies of the physiologic basis for addiction ties in well with the interest we have in neurosciences in general and particularly in neuroimaging, so I think there’ll be a lot of synergy there.

(Editor’s Note: Stony Brook University Medical Center received the Consumer Choice Award from the National Research Corporation for the third consecutive year, honored as the highest-rated hospital in the New York, Newark, NJ, and Edison, PA, metropolitan statistical areas in the areas of Best Doctors, Best Nurses, Best Overall Quality, and Best Overall Image/Reputation. The center also was recognized with the Breast Imaging Center of Excellence designation by the American College of Radiology.

Kenneth Kaushansky, Senior Vice President of the Health Sciences, is a Master of the American College of Physicians, and a member of the Institute of Medicine of the National Academies of Science and the American Academy of Arts and Sciences.)

On cooperative efforts between SBU and BNL:

“Again, as you look at what’s happening in science nowadays — it’s been in big science in physics for a long time, where multiple teams working together is the order of the day — I think it’s happening more throughout all science, things that were done by single scientists are becoming multidisciplinary. In the biological sciences and imaging, more and more you need informatics or computing power to make studies in a number of areas. One thing we’re excited about is being able to partner with BNL and apply for large awards, particularly large infrastructure awards having a critical mass of users and expertise so that people know that this community will get the most out of this piece of equipment or whatever center is created. So, to the extent that we can build on these complementary areas of expertise, I think that we will be more competitive for funding in the future. As we work together and expand the world of funding available to us, we’re going to be in better shape and that’s part of what’s providing the kind of infrastructure like New York Blue and also the human capital needed. Being able to recruit the people who are going to be competitive for these kinds of grants is part and parcel of the same thing.”

“Our whole agenda of science communication is very exciting. BNL has been involved in a number of the innovative programs we have developed with Dean of Journalism Howie Schneider and the well-known actor Alan Alda. It’s something I’ve been talking about, because the funding challenges that we face are continually on my mind. I think that more than ever, it’s going to be critically important to be able to communicate science to people and really capture the excitement of the kinds of things we’re doing, and how much it matters to them in their lives. It’s a challenge and I think that the kinds of things we’ve been doing together will help push that forward.”

(Editor’s Note: Dean Schneider has established a unique Center for Communicating Science that has initiated a program to communicate science and will start a new Master of Science journalism program this year. SBU also initiated an effort to provide matching scholarships for BSA Scholarship winners who go to SBU, and helps fund scholarships awarded by BNL for women in science.)

“It certainly was an honor to be asked to be part of this team and we are working to review candidates for some of the leading positions in the cabinet. We’ve had the chance to nominate as well as review and I think we’re getting a pretty good view of some of the things that may drive policy in the administration. It’s still early, but the way in which they have reached out to a pretty broad constituency suggests that they’re listening to some of the needs. Clearly, there’s a major focus on economic development. That’s where I think that SBU and BNL can play an absolutely key role for this region and for the state. As for the areas in which we’re partnering, well, for example, with BNL’s Global & Regional Solutions Directorate headed by Gerry Stokes, we really have more opportunities than ever to work together on intellectual property developed through our researchers, whatever the area, from the Smart Grid to materials. I think that’s going to be critically important for economic development.”

On inventions and patents:

“This is another area of opportunity for more links between SBU and BNL. Stony Brook has a strong tradition, particularly in the biomedical area where we’ve had a couple of big successes, but this field is dependent on a couple of things — to some degree, the level of research funding, because the more research dollars you have, basically, the more innovations are going to come out of your laboratory — but it’s also cultural, getting the staff to be engaged in this and understand the potential benefits from trying to bring things to the market. One of the reasons that we do research, ultimately, is to lead to innovation that will make a difference. There’s some research where it would be very difficult to make a definite connection to the everyday world, yet it’s still absolutely important. We need to answer the big questions and that’s something that SBU likes to do in a broad number of fields, and BNL does too. But where we can find applications, I think we really need to get them out. I think it’s what the government expects of us when they provide funding, so I’m excited about those opportunities.”

(Editor’s Note: BNL and SBU are working closely together on innovation, technology commercialization, economic development, and preparing new technology ventures for the commercial marketplace. SBU owns and operates the Calverton Business Incubator to help local entrepreneurs create new businesses, with active involvement from BNL. BNL, SBU, and the New York State Small Business Development Center (NYSSBDC) at Stony Brook developed the Entrepreneurs’ Foundation Workshop Series to help those interested in starting up technology companies. The latest networking event in this series on January 24 focused on “Protecting Intellectual Property.” The next event, which is also co-hosted by BNL, SBU, NYSSBDC and the U.S. Small Business Administration, will be held on Monday, April 25, 5-7:30 p.m., at BNL’s Brookhaven Center. It will include a panel discussion on “Funding Startups.”

“I want to say also how much I enjoy working with BNL’s leadership — they are outstanding scientists as well as administrators. Sam Aronson is someone I’ve grown to value tremendously as a colleague. We are probably in communication weekly, and his vision, I think, has been key in helping propel the Laboratory forward. I have tremendous respect for Sam and his team.”