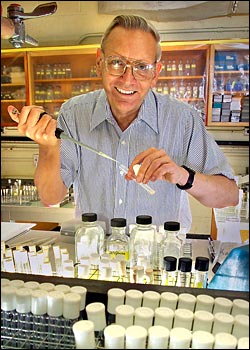 With colleagues in the Biology Department, F. William Studier developed Brookhaven Lab's most successful technology: the T7 protein expression system. Researchers around the world in academia and industry use the technology for producing proteins within bacterial cells for basic biomedical research and practical applications, such as medical diagnostics and treatment.

Approximately 900 companies have licensed the T7 system, which has earned BNL much of its royalty income over the years. These T7 licenses have resulted in royalties and license fees totaling about $55 million — income that helped the Lab to fund strategic research and deployment, maturation of promising technologies, and educational programs.

As a student in high school, Studier did not aspire to be a biophysicist or an inventor. Still, he had an attraction to scientific discovery. He explained, "I've always been interested in solving problems. There are many unknowns but scientific investigation can provide definitive answers. The process of testing and proving has always interested me."

He added, "The motivation for my research is not commercial application. My interest is in basic research."

From Pre-Med to Biophysics

Studier grew up in Waverly, a small town in Iowa. Attending high school there, he took math, physics and chemistry courses but no courses in biology. When he went to college at Yale, however, he was a likely pre-med student. In his freshman year, his aunt gave him the book Atoms in the Family: My Life with Enrico Fermi, and that changed his course of study.

"That book got me interested in physics," Studier said. "I decided to major in biophysics. While at Yale, I took physics and biophysics courses from Dick Setlow and worked in the biophysics department as part of a scholarship program." Student and mentor became colleagues when Setlow joined the BNL Biology Department in 1974.

After earning a B.S. in biophysics from Yale in 1958, Studier continued his studies in the subject at the California Institute of Technology, where he earned his Ph.D. in 1963. After a postdoctoral fellowship in the Biochemistry Department at the Stanford Medical School in California, he joined Brookhaven in 1964 as an assistant biophysicist. Studier rose through the ranks to become chair of Brookhaven's Biology Department in 1990, a position he held until 1999, when he returned to full-time research.

Studier first encountered bacteriophage T7, a virus that infects E. coli bacteria, when he analyzed its DNA as a graduate student. Understanding how this virus takes over the bacterial cell to produce new viruses became a focus of his work when he came to BNL.

When T7 invades a bacterial host cell, it makes proteins that turn off the host genes and turn on T7 genes. Eventually, the host cell dissolves and releases hundreds of T7 particles to infect other cells and repeat the process. This wave of infection can rapidly clear a turbid bacterial culture. Hence the name bacteriophage, which means bacteria eater.

Studier and colleagues defined and mapped T7 genes and determined functions for many of them. A central player in virus growth is an enzyme called T7 RNA polymerase, which directs the host cell to produce T7 proteins instead of its own proteins. As technology for DNA sequencing developed, John Dunn, a colleague in the Biology Department, was able by 1983 to determine the sequence of all 39,937 base pairs of T7 DNA, which allowed all of the genes and genetic signals of T7 to be identified.

A method called gel electrophoresis allows proteins, DNAs and RNAs to be separated and visualized. An electric field is applied to a gel matrix to separate molecules by charge and mass. Studier applied this technique to study T7 proteins and messenger RNAs but found the analysis of each sample in a separate tube, the state-of-the art at the time, to be tedious. Furthermore, comparisons between samples were not always straightforward.

"With the help of the Lab's electronics shop, I developed a vertical slab-gel electrophoresis apparatus in 1970," Studier said. "It was a great advance over tube gels because it allowed as many as 25 samples to be analyzed simultaneously and compared to each other directly, without the need to process and align 25 individual tube gels. A few weeks after first using the system, I showed some results in a seminar at Cold Spring Harbor Laboratory. Of course, everybody wanted such a system and I was soon sending out plans on how to build them to hundreds of laboratories. Companies rapidly picked up on it, and now almost any laboratory has a commercial slab-gel electrophoresis system based on my design."

At the time Studier developed his slab-gel electrophoresis system, there was little incentive for a BNL scientist to patent an invention. The U.S. government would own any patents, and royalties (if any) did not go to the inventor, the national laboratory, or the Atomic Energy Commission (which owned the national laboratories at that time) but instead to the U.S. treasury.

Slab-gel electrophoresis was a case in which widespread commercialization proceeded without patent protection. However, Congress recognized that commercialization of inventions made in the course of government-supported research would be stimulated if inventors and their institutions benefited directly from royalties. The Bayh-Dole Act, enacted by the U.S. Congress in 1980, gave universities, small businesses, and nonprofit organizations intellectual property control over inventions made using federal research dollars, and it specifically provided for royalty sharing with inventors.

Basic research had revealed how effective the T7 virus is at directing E. coli bacterial cells to make T7 proteins. It seemed possible that T7 genetic elements could be harnessed to direct cells to produce large amounts of any desired protein even in the absence of the virus. The key to this was to clone the gene for T7 RNA polymerase. Other researchers were also working on this problem, but Studier and his colleagues were the first to solve the puzzle.

This work was going on just as the Bayh-Dole Act was being implemented at BNL. The initial T7 patent application, filed in 1984, was actually the first Brookhaven invention to go through the new system, and three related patents eventually were issued. Patents have a limited lifetime (now 20 years from the date of filing) and the last T7 patent expires in 2014.

In 1977, Studier won the Department of Energy's Ernest Orlando Lawrence Memorial Award for his "fundamental contributions to DNA and gene structure and function essential to understanding radiation and chemical induced genetic damage and repair." He was elected to the American Academy of Arts and Sciences in 1990 and to the National Academy of Sciences in 1992, one of the highest honors a scientist can receive. Further honors have included becoming a fellow of the American Academy of Microbiology in 1998 and a fellow of the American Association for the Advancement of Science in 2007.

Studier has continued to develop technologies to make the T7 expression system more widely applicable and efficient. In 2004, he won the R&D 100 Award from R&D Magazine, which recognizes the top 100 technological achievements of the year, for developing a new process that simplifies the production of proteins in the T7 system. He is currently developing a set of more efficient vectors to increase the range of proteins that can be produced. A stimulus for these efforts was participation in structural genomics, a large-scale effort to survey the types of protein shapes commonly found in nature. This information will help reveal roles that proteins play in health and disease and guide the design of new medicines targeted toward specific biochemical pathways.

Studier was part of an international team that sequenced and analyzed the genomes of two laboratory strains of E. coli bacteria, called B strains, work published in 2009. One of these was a strain that had been constructed by Studier specifically for use in the T7 expression system. “Detailed information about these strains is useful for understanding laboratory studies and may also be helpful to companies who are using the T7 system to make proteins for medical purposes,” Studier said.

While Studier enjoys traveling with his wife Sue and visiting their two grown children and three grandchildren in California, his interest in research remains intense, and he shows no signs of slowing down his work schedule. "I'm getting paid for what I like to do," he said.

Reflecting on his success with the T7 system, he added, "It's to everyone's benefit to patent discoveries that have commercial application, and it's a good idea to make it easy for researchers to apply for a patent, but my work is not aimed at commercial application. I'm interested in basic research."