Getting the Lead Out: NASA Summer School Teaches Challenges of Space Radiobiology

The problem: there’s a lot of radiation in space.

In the future, if NASA plans a trip to Mars or builds a space station on the moon, the astronauts on these missions (or more specifically, the radiation-vulnerable cells of the astronauts) will benefit from research done at Brookhaven’s NASA Space Radiation Lab (NSRL). The astronauts of the future may also benefit from research conducted by past and present Brookhaven summer students during the annual NASA-BNL Space Radiation Summer School (NSRSS). 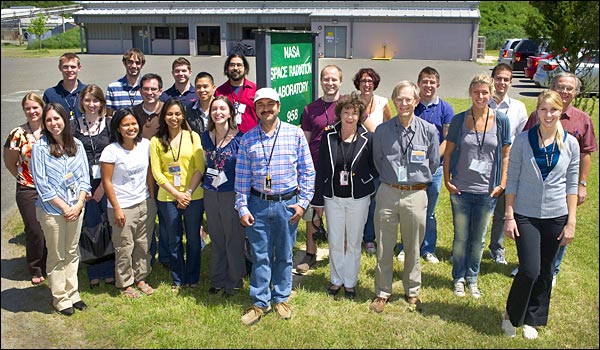 Every summer since 2004, about 15 graduate students, postdocs, and professionals in molecular biology, genetics, and physics gather at the Laboratory for three weeks to learn about the evolving problems and technologies in the field of space radiobiology. The students, who come from all over the world, learn about the methods scientists use to assess how space radiation affects living cells, in hopes that what they learn at Brookhaven will inspire them to pursue research objectives in space radiobiology and related fields.

According to NSRL physicist Adam Rusek, “While the common thread throughout the course is astronauts in space, many of our students are interested in topics like the relationship between radiation and cancer — including, for instance, how different kinds of radiation can both create and destroy cancer cells. So many of our students will go on to surface somewhere else, and use what they learned in this program for other research.”

The NASA program is co-sponsored by Brookhaven Lab, Loma Linda University Medical Center, and the Universities Space Research Association (a nonprofit organization of over a hundred institutions with graduate programs in space-related science and engineering).

Located in the Booster accelerator of the Relativistic Heavy Ion Collider (RHIC) at Brookhaven, the NSRL is the only research facility in the country capable of producing beams of heavy ionizing particles that abound in space, so it’s the only lab where NASA scientists can simulate the caustic environment of protracted space travel.

“Radiation above all is what limits the durations of missions in space,” said Dudley Goodhead, emeritus director of the Medical Research Council Radiation and Genome Stability Unit in England, who was scientific co-director of this year’s program with his wife Linda (the retired head of the Science Department at Headington School, Oxford).

Goodhead continued, “We know there are serious risks but we don’t know how big they are, because radiation like the kind you get from a nuclear weapon is very different from the radiation you receive over a long time in space. So the focus of the NSRL and the summer program is to figure out where the risks lie and how they might be diverted — especially with pharmaceuticals, since shielding can only go so far in protecting the body from galactic cosmic rays (heavy ions with high energy) and solar rays.”

Guest professors at the NASA summer school included leading scientists in the field, professors, and even former astronauts.

“This year, Mike Barratt came in to give a talk on what it was like to live aboard the International Space Station for over a hundred days,” said Goodhead. “Since Barratt is also a medical doctor, he could explain in detail some of the biological effects astronauts past and present experience during and after missions.”

Joshua Brown-Clay, a grad student from Georgetown University, said, “There are no other programs like this for space radiation biology, and it’s very intense. We have seven hours of workshops and lectures a day — all of which require a lot of energy and thought — then we go home and finish the work from that day and study for the next.”

Students also conducted a series of small experiments at the NSRL and wrote a mock research proposal at the end of the course to help them learn about how creative, interesting research is accepted and conducted in the space radiobiology field. Many students go on to develop the exercise into real grant proposals.

“I got three great research ideas just in the last week of the program,” said Ashley Purgason, a student working at the Johnson Space Center in Houston. “And most of those ideas arose from seeing how all the material in the course flows together week after week. Even at NASA, you can’t get the kind of exposure you get here, after hearing all those talks from experts around the world, doing activities, and sharing ideas with other student-colleagues from different fields and academic backgrounds.”

“Several of our ex-students are now getting grants from NASA,” said Francis Cucinotta, an instructor in the summer program and chief scientist at the NASA Space Radiation Program in Houston. “It’s a very unique opportunity to get to learn in a multidisciplinary environment like this, and the program is getting more competitive by the year.”