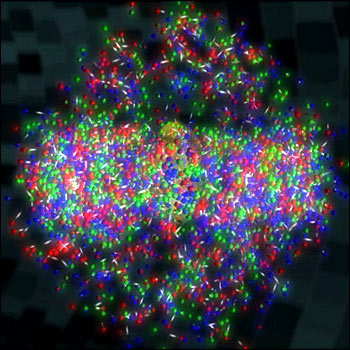 Over the past few years, scientists have seen an exciting convergence of three distinct lines of research on different kinds of extreme quantum matter. Two of these involve quantum fluids that can be studied in the laboratory: ultracold quantum gases and the quark-gluon plasma produced at Brookhaven’s Relativistic Heavy Ion Collider (RHIC). Even though these two quantum fluids exist at vastly different energy scales — from near absolute zero to four trillion degrees — their physical properties are remarkably similar. The third line of research is based on the discovery of a new theoretical tool, derived from string theory, for investigating the properties of extreme quantum matter — namely holographic dualities, a mathematical relationship between quantum mechanical systems in our world and black holes that theoretically exist in a higher dimensional space.

A symposium organized by Brookhaven Lab physicist Peter Steinberg, Columbia University/RHIC physicist Bill Zajc, and members of Brookhaven’s Media & Communications Office brought these topics together at the 2009 meeting of the American Association for the Advancement of Science (see http://www.bnl.gov/aaas09/perfectLiquid.asp and http://www.bnl.gov/rhic/news2/news.asp?a=2513&t=today). Since then scientists from the three fields have continued to discuss their overlapping interests. They’ve now published a series of papers in the July 2011 issue of the New Journal of Physics, designed to foster further communication and understanding between these three fields. Steinberg served as a guest editor.

You can access introductory comments and the scientific articles at:
http://iopscience.iop.org/