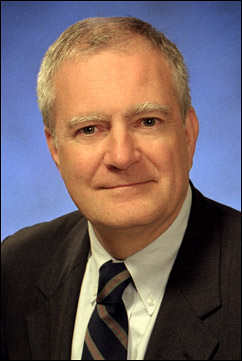 Former Brookhaven National Laboratory Director John (“Jack”) H. Marburger III — a physicist who also served as President of Stony Brook University, Science Advisor to the President, and Director of the Office of Science and Technology Policy — died at his home in Port Jefferson, NY, on July 28, 2011, after four years of treatment for non-Hodgkin’s lymphoma.

Under his leadership at Brookhaven, the Laboratory commissioned the Relativistic Heavy Ion Collider (RHIC) and advanced a range of scientific programs and industrial partnerships, achieved ISO14001 certification of its environmental management system, and established a Community Advisory Council that fostered significantly improved support among the Lab’s neighbors and other stakeholders.

“Jack Marburger was an inquisitive thinker and a champion of Brookhaven Lab’s research,” said Sam Aronson, current director of the Laboratory. “Throughout his long and fascinating career, his finest qualities included his ability to listen and to find common ground among people with very different points of view. He led Brookhaven Lab through one of the most challenging times in its history, restoring public trust and putting in place policies of openness, inclusion, and environmental stewardship that still guide us today.

“Jack was an expert in bringing people together — even in his final weeks and days, he dedicated his time to enhancing the relationship between Brookhaven and Stony Brook University through strategic collaborative initiatives. His calm, reasoned demeanor, elegance, and bright smile will be missed by all.”

Mike Holland, manager of the Department of Energy’s Brookhaven Site Office, added, “Jack Marburger’s contributions to science and to society were generous and profound. His vision, leadership, and gentle manner will be missed.”

John Marburger was born on Staten Island, N.Y., on February 8, 1941, and grew up in Maryland near Washington, D.C. He earned a bachelor’s degree in physics from Princeton University in 1962, and worked for a year at Goddard Space Flight Center before returning to school to earn a Ph.D. in applied physics from Stanford University in 1967.

Marburger joined the faculty of the University of Southern California (USC) in 1966, as a Professor of Physics and Electrical Engineering, eventually becoming Chair of the Physics Department and then Dean of the College of Letters, Arts and Sciences. While at USC, he contributed as a theoretical physicist to the rapidly growing fields of nonlinear optics and quantum optics, subjects transformed by the invention of the laser in 1960. He was a co-founder of the university’s Center for Laser Studies, a consultant at Lawrence Livermore Laboratory on high power laser phenomena, and a frequent public speaker on science, hosting a series of educational programs called “Frontiers of Electronics” on CBS television.

In 1980, at age 39, Marburger came to Long Island to become the third President of Stony Brook University. During his tenure, the university’s federally sponsored scientific research grew to exceed that of all other public universities in the northeastern U.S. The University Hospital opened during this time, and biological sciences became a major strength of the university.

During his presidency at Stony Brook, Marburger served on numerous boards and committees. He chaired the New York State Governor’s Commission on the Shoreham Nuclear Power Plant and the 80-campus Universities Research Association, which runs Fermi National Accelerator Laboratory and operated the former Superconducting Super Collider Laboratory during the lifetime of that project. He also served as a trustee of Princeton University and a trustee or director of many other organizations.

In 1994, Marburger stepped down from the presidency, becoming a member of Stony Brook’s faculty and resuming research in optical science as a professor in Stony Brook’s departments of Physics and Electrical Engineering.

In January 1998, Marburger was named the first president of Brookhaven Science Associates (BSA), which made a successful bid to manage Brookhaven Lab for the U.S. Department of Energy, replacing Associated Universities, Inc. Two months later, he became the Laboratory’s first director under BSA. 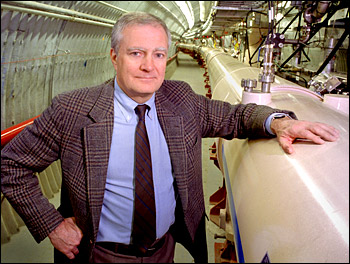 John Marburger in the tunnel of Brookhaven's Relativistic Heavy Ion Collider in 2000.

As Brookhaven’s director, Marburger was faced with the challenge of restoring the local community’s trust in the Laboratory after legacy environmental problems, including a long-term leak of tritium from the Lab’s now closed High Flux Beam Reactor, came to the fore. He played a significant role in the Lab’s environmental restoration, and he successfully rebuilt the Lab’s reputation as a responsible environmental steward. Under his leadership, nine internal Laboratory organizations achieved ISO 14001 registration, an internationally recognized standard of excellence in environmental management. Further, he was a strong advocate of community involvement and transparency as a way to foster better relationships with the Laboratory’s neighbors and stakeholders.

Marburger also presided over numerous groundbreaking scientific advances at the Lab, including commissioning of the Relativistic Heavy Ion Collider, the Laboratory’s world-class accelerator, which produced intriguing results in record time. He also expanded a program in medical imaging and neuroscience that has gained worldwide recognition for studies of how various diseases, aging, and addictive drugs affect the brain. Recognizing the importance of industrial partnerships, Marburger also placed more emphasis on Brookhaven’s technology transfer program.

Marburger’s eight-year term as Science Advisor to President George W. Bush and Director of the Office of Science and Technology Policy began immediately following the terrorist attacks of September 11, 2001. Among his significant achievements were helping to establish a science agency within the Department of Homeland Security and working to prevent the reaction to 9/11 from undermining U.S. participation in global science. He also worked to preserve independence in Internet governance, freeing up large blocks of the broadcast spectrum for commercial wireless applications. In addition, he re-oriented the nation’s space policy following the crash of the Columbia space shuttle in 2003.

Marburger played a significant role in international negotiations on climate change that would form the basis for U.S. climate policy. Further, he played an important part in developing the president’s American Competitiveness Initiative and energy-related goals, including the U.S. re-entry into a project to build a fusion reactor, the International Thermonuclear Experimental Reactor. Serving the nation at a time of deep ideological divisions, Marburger sought to objectify decision-making in science policy through a movement known as the “science of science policy,” which won international recognition. At the end of the Bush presidency in 2009, Marburger was longest-service science advisor in history.

Marburger returned to Stony Brook University as a physics professor in 2009. The next year, Stony Brook’s new president, Samuel Stanley, asked him to take on the job of Vice President for Research. He retired for health reasons on July 1, 2011.

The author of numerous papers in the area of non-linear optics and quantum electrodynamics, Marburger co-edited The Science of Science Policy: A Handbook, which was published this spring (2011) by Stanford University Press. In September 2011, Cambridge University Press will publish his book on quantum mechanics: Constructing Reality: Quantum Theory and Particle Physics.

In lieu of flowers, the Marburger family requests that memorial gifts in Jack’s name be directed to the John H. Marburger, III Memorial Fund. Please contact the Office of Advancement at (631) 632-6300 for information.

A memorial service will be held at Stony Brook University in the fall.