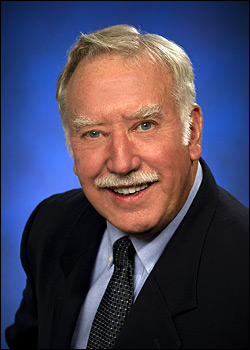 Carl Anderson, former chair of the Biology Department, has been named Senior Scientist Emeritus for his distinguished contributions to microbiology. Anderson retired in April 22, 2011, after a 36-year career at BNL.

Among Anderson’s notable achievements was the discovery and initial characterization of DNA-activated protein kinase (DNA-PK), an enzyme in human cells that is critical for the repair of DNA strand breaks. Both normal metabolic activities and environmental factors, such as radiation, can cause structural damage to DNA, and repair is essential for the cell to transcribe the gene that the DNA encodes and to prevent potentially harmful cell mutations that may lead to cancer or other diseases.

“When I was on sabbatical leave at Cambridge University in 1983, a talented graduate student, Anthony Walker, and I discovered DNA-PK by accident,” Anderson said. “We didn’t realize what we had found until much later, and we published our results in 1985. Since that time, DNA-PK — which is important for the development of the immune system as well as DNA repair — has been the subject of numerous studies.”

The research on DNA-PK led to studies of the tumor suppressor protein p53. This protein regulates the activity of about 150 genes, including a critical gene that protects humans from developing cancer.

In 1989 Anderson and postdoctoral student Susan Lees-Miller, now on the faculty at the University of Calgary, found that DNA-PK phosphorylates (adds phosphates to) p53, which changes the tumor suppressor protein’s properties and activities. Making a chemical modification to a protein in this way, during a stage in protein biosynthesis that is part of gene expression, is known as post-translational modification.

This finding led to Anderson’s 20-year collaboration with Ettore Appella of the National Institutes of Health (NIH) to characterize other post-translational modifications of p53.

“Tumor suppressor p53 integrates information in a cell,” Anderson said. “It makes cells respond to stress signals, such as DNA damage, in an appropriate manner. The protein helps to reestablish normal conditions in cells. For instance, it can activate pathways in cancerous cells to stop them from growing and then kill them. It also can cause cancerous cells to kill themselves.

“Modifications of p53 became a topic of intense interest among biologists,” he added. “About 50,000 papers have been published on p53. I maintain a map of p53 posttranslational modifications and the enzymes that are believed to have caused them. This information can aid in understanding how cancer cells are either allowed to grow or be destroyed.”

In 1981, Anderson, the Biology Department’s John Dunn and Stony Brook University researchers were one of two groups that deciphered and characterized the poliovirus genome. Two vaccines, developed in the 1950s and 1960s, have eradicated polio in developed countries, but there are still some reported cases in developing nations. The genome characterization of the virus may lead to new ways to abolish the disease or effectively treat it. Since the characteristics of the virus and genome are well documented, the poliovirus is a useful model for studying the biology of similar viruses.

Beginning in 1984, Anderson met every two years with a group of distinguished protein chemists at a workshop, “Methods in Protein Sequence Analysis.” At a meeting in Greece in 1998, Anderson and other workshop participants realized that organizing such meetings was becoming increasingly difficult. With their colleagues’ approval, Anderson, Appella (NIH), and Jay Fox, (University of Virginia), founded the International Association for Protein Structure Analysis and Proteomics in 1999, and the association has successfully organized meetings ever since. The next biannual meeting will be held at the University of Ottawa, Canada in 2012. Anderson has served as secretary of the association since it was established.

“I was fortunate in that the Lab Director at the time, the late Jack Marburger, who appointed me as chair, had promised support for hiring several new scientists, and I had access to other funds from patents that allowed me to compete for the very best talent,” Anderson said. “Over my 11-plus years as chair, I hired eight young researchers, and when I stepped down, all had become successful scientists, and only one had left BNL.”

Anderson earned a B.A. in chemistry and physics from Harvard University in 1966 and a Ph.D. in microbiology from Washington University in 1970. He was a postgraduate fellow and later a staff scientist at Cold Spring Harbor Laboratory before joining BNL’s Biology Department in 1975 as an assistant geneticist. Anderson was granted tenure in 1981 and promoted to senior geneticist in 1996 before being named chair in 1999. Also, he has been on the faculty of Stony Brook University since 1976.

In 2010, Anderson took a short sabbatical leave to work with a colleague at the National Institute of Environmental Health Sciences (NIEHS) at Research Triangle Park near Chapel Hill, North Carolina.

“My wife and I grew up in Chapel Hill, where my father was a professor of biochemistry at the University of North Carolina and her father lectured at the university’s planetarium,” Anderson said. “We thought we might retire in Chapel Hill some day, and we started construction of a retirement home there in the spring of 2010.”

He added, “Much to my wife’s disappointment, I haven’t retired. I have a guest researcher appointment at the NIEHS and expect to continue my research on p53 with colleagues there. I was also invited to serve on a graduate student thesis committee at the University of North Carolina, and I recently accepted an invitation to give a mini-course on cellular response to DNA damage at a university in Japan this fall. And most importantly, I hope to continue to contribute to the Biology Department and especially to the young scientists whom I recruited.”