Gary Welch: A Passion for Skydiving and Muscle Cars

Gary Welch, supervising physical therapist in the Occupational Medical Clinic, knows what it’s like to free fall at 13,000 feet in the air — exhilarating! 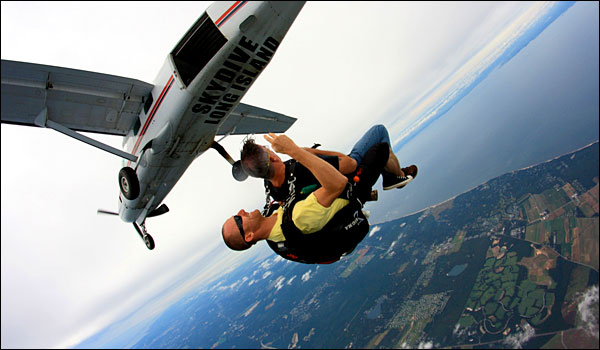 Gary Welch and his tandem instructor enjoy a view of eastern Long Island from about 13,000 feet in the air.

“For about the first four seconds, you get a rollercoaster feeling in the pit of your stomach, but then you feel as though you’re flying, and it’s a remarkable experience,” Welch said, speaking of his recent skydiving experience at Skydive Long Island in Calverton. “I felt high for two days afterwards.”

Welch first got interested in skydiving about five years ago when he heard about a study being done at Stony Brook University on the psychological and physical effects of skydiving to determine who would be the best candidates as Navy Seals, based on the experimental subject’s tolerance of risk and danger. More recently, one of Welch’s patients at his private physical therapy practice told him about her unusual wedding ceremony — she and her fiancé performed a skydive jump in front of their guests at Calverton Links, a golf course where the reception was held. Then Welch’s colleague started talking about his wish to go skydiving. That clinched it, and Welch, with three of his colleagues, tried it out on a sunny Saturday in September.

Welch and his fellow skydivers were given instructions from a certified tandem instructor, watched a video on skydiving techniques and safety, and signed a six-page release form. Safety rules and procedures were fully explained to Welch and his group, and all rules and regulations were strictly followed during the entire skydiving experience to avoid undue risk.

Then the group climbed aboard a 19-passenger Cessna that reaches 13,500 feet in 20 minutes. Welch was the second to jump off the plane with the tandem instructor.

“The colleague who jumped before me looked like she was being sucked out of the plane,” Welch said. “It was a surreal moment.”

But it did not deter Welch, who, following the directions of his tandem instructor, sat at the open door of the plane, his feet hanging down. Then, in a split second, he felt the sensation of falling very briefly. Then he just felt relaxed, with the wind whipping around him at about 120 miles per hour. With his body parallel to the ground for about 40 seconds before the parachute opened, he enjoyed the view of both the north and south shores of Long Island.

“When the parachute opens up, there’s a significant deceleration,” Welch said. “The instructor showed me how the lanyards work, and he let me control the direction of the parachute. At this point, I changed to a vertical position, and I was able to take my goggles off.”

Welch and his instructor landed on their feet between two runways in Calverton. The whole skydiving episode took about five minutes, but provided pleasurable memories, bolstered by viewing video and photos taken by a skydiving photographer who was right next to Welch and his instructor, expertly manipulating his parachute, a video camera and digital camera, both attached to his helmet.

“You must take seven tandem flights before you jump yourself,” Welch said, adding that he is already thinking about taking his next skydiving flight. If anyone in the BNL community is interested in joining Welch’s skydiving group, contact him at Ext.3551, or gwelch@bnl.gov. 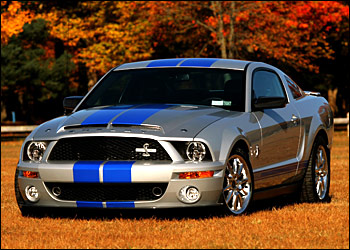 On the ground, Welch indulges his passion for muscle cars — the high-performance, sleek and flashy automobiles that were most popular in the 1960s and 1970s. Today, these cars are avidly collected and restored.

Welch’s interest in muscle cars goes back to his teenage years. “My first car was a 1971 Mustang, my second car was a 1965 Falcon Sprint with a 289 V8 and four speed, and my third car was a 1966 Mustang GT that I built from the ground up,” Welch said. “I only had the car’s body — no windows, no engine — and I restored it all myself, except for the paint job.”

“I wanted to own a Mustang Shelby for a long time, but 20 years ago, the only Shelby I could afford was a dog — I named my dog after the car,” Welch said. He added that when he and his wife started to raise a family, he shelved his passion for muscle cars for 18 years. But when the anniversary edition of the Mustang Shelby was announced, he could no longer resist the urge to buy one.

“I wanted to buy it for the sheer pleasure of it, but I also think it will be a good investment,” Welch said. “In 20 years, it will be a classic, just like the original.”

Welch is enjoying his Mustang Shelby as much as he anticipated. He occasionally enters it in car shows, and he was invited to a show in Pennsylvania — all expenses paid — to exhibit it. Recently, he attended a show sponsored by Orange County Mustang Club in Newburgh, NY, where he won a first-place trophy, competing in the category of high-performance cars manufactured from 2005 to the present.

Occasionally, Welch takes the car out on the road with the family. “It has 5,500 miles on it now,” Welch said. “I take it out in nice weather. It’s never been in the rain.”