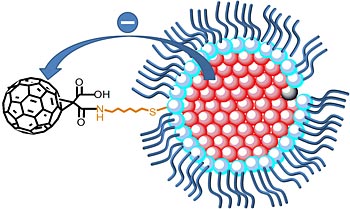 Imagine a tiny light bulb, a handful of nanometers (billionths of a meter) in diameter. It stays on for a time, then blinks unexpectedly out and comes back to life a moment later. On. Off. On. Off. On. Off.

Such telegraph-like behavior is a feature of quantum dots — tiny semiconductors with unique optical and electronic properties as a result of their size. They emit light in very specific wavelengths (colors) based on the size of the dots themselves, allowing scientists to fine-tune their emission color. They have shown promise for many applications, such as light-emitting diodes (LEDs), solar cells, biological sensors, and electronics.

Not all dots are created equal, however — some, called simply “bad” quantum dots, blink in an irregular, unreliable way. This unreliability makes them problematic to work with.

Mircea Cotlet and Zhihua Xu of Brookhaven National Lab’s Center for Functional Nanomaterials have just figured out why bad dots are so unreliable. Their research was published November 7 in the journal Small.

“Understanding and controlling the blinking of quantum dots is important because blinking can severely impact the utilization of quantum dots,” says Cotlet. For example, in the case of large-scale applications like the production of solar panels where many, many dots are being used in unison, the blinking will somewhat hurt the overall efficiency — the conversion of sunlight to electricity.

In applications that use a single quantum dot, such as biological sensors, this fallibility can have dramatic consequences. Quantum dots are generally brighter and longer-lived than organic dyes used today, and are increasingly used in biology to tag biomolecules. Once tagged, the dot’s emissions will act as a beacon for scientists, allowing them to track the target biomolecule. But if a dot blinks, scientists may lose track of their biomolecule. It’s like trying to radio-track wolves with capricious transmitters that could cease transmitting at any moment.

So understanding why the dots blink and how to control them could eventually help scientists develop more efficient solar cells and improve other applications.

Scientists believe blinking is closely related to the presence of charge trap sites — nanoscale defects around the quantum dot’s core that literally trap electrons and prevent the dot from emitting light. How exactly charge traps may affect the blinking behavior is still a mystery.

To test the effects of charge traps, Cotlet and Xu created their own, precisely controlled charge traps. The traps were made of nanoscale fullerenes (better known as buckyballs), perfectly paired to an individual dot, so that they would be sure to capture electrons from the dot. With an original surface-based assembly procedure the scientists had developed, they were able to precisely control the location of the trap relative to the dot.

Cotlet and Xu found that the blinking pattern of the quantum dots with their artificial external trap matched well with the “bad” dots from a control batch of dots manufactured in typical fashion. This lead them to conclude that charge traps similar to the ones they created are the cause of the blinking in the small fraction of “bad” dots produced by normal manufacturing.

“This type of trap could be created as a result of typical manufacturing methods,” said Xu, “and in some cases it is the primary source for blinking. But depending on the fabrication and processing procedure, this ratio [of ‘bad’ dots] could be much higher,” says Xu.