Tenure appointments are made after a rigorous selection procedure culminating in a comprehensive review of each tenure case by the Brookhaven Council, an elected body that advises the Director on matters of concern to the scientific staff. The BSA Science & Technology Steering Committee oversees the tenure process and makes final recommendations to the BSA board. The newly tenured scientists are featured in alphabetical order, or as photographs or articles become available. James Alessi and Hooman Davoudiasl were featured on January 26, Ralph James and Ping Liu, on January 27; Jason Graetz and Qiang Li on February 6; and Chang-Jun Liu and Paul Sorensen, on February 9. The contributions of Allen Orville and Bo Yu are summarized below. 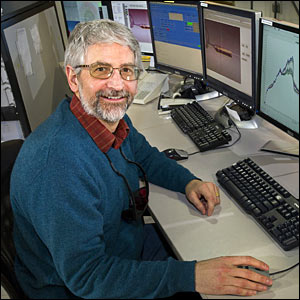 Allen Orville, a biophysicist in the Biology Department and Photon Sciences Directorate, has been awarded tenure for his creative, original work in integrating several research techniques to understand how specific enzymes affect biochemical reactions such as metabolism, light emission, photosynthesis, and DNA repair.

For his work with these enzymes — proteins called metalloenzymes and flavoenzymes — Orville uses the innovative X26C beamline he developed at the National Synchrotron Light Source (NSLS). There, scientists study chemical reactions and biological processes using multiple techniques — optical absorption spectroscopy, Raman spectroscopy and x-ray crystallography — to collect complementary data nearly simultaneously from the same single-crystal sample. This insight helps to determine how biological processes affect the structure of enzymes and how their structure affects their functions.

“Allen’s expertise and drive is an invaluable resource for the NSLS and for realizing the potential of NSLS-II going forward,” said Creighton Wirick, interim chair of the Biology Department.

Orville is the spokesperson for a future beamline at NSLS-II, the “Single-Crystal Spectroscopy & Macromolecular Crystallography at a Three Pole Wiggler Beamline (SM3).” It will extend the X26C beamline’s current capabilities, enabling multi-disciplinary, nearly simultaneous studies of single crystals.

In addition to developing X26C, which is recognized internationally as one of the leading beamlines for simultaneous x-ray diffraction and spectroscopic experiments, Orville worked on more than 120 publications and was invited to speak at 55 talks around the world. He also contributed 41 crystal structures to the Protein Data Bank, an international storehouse of three-dimensional structural information about proteins, nucleic acids, and other biological macromolecules.

Orville’s career began at the University of Minnesota, where he earned a bachelor’s degree in biology in 1983 and a Ph.D. in biochemistry in 1997. He arrived at Brookhaven in 2006. 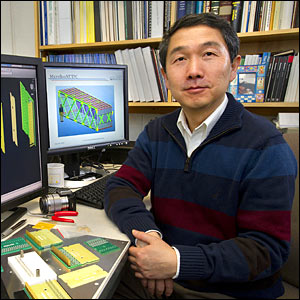 Yu’s key contributions included developing the cathode-strip particle position readout adopted as the basis of the muon chambers of the ATLAS detector at the Large Hadron Collider at CERN, Switzerland. He also contributed significantly to the design of high multiplicity detectors for heavy-ion research, from early experiments at the Alternating Gradient Synchrotron to high-accuracy position readout of gas-filled detectors in the PHENIX experiment at BNL’s Relativistic Heavy Ion Collider.

Also, Yu’s work on liquid argon time projection chambers was a key ingredient in the emergence of BNL as a leading institution in the present and future development of neutrino detectors based on liquid argon technology.

“Bo has made significant, original contributions to the state-of-the-art of detectors and, in particular, to the art and science of position sensing of charged particles, neutrons and photons. In developing detector techniques, it is rare for one person to originate an idea, then perform simulation, experimental verification, and integration into the final instrument,” said Veljko Radeka, Instrumentation Division head. “Bo has a unique combination of all these capabilities, which he has applied to the benefit of critical BNL programs in particle physics, neutron and synchrotron physics, medical imaging, and homeland security.”

Bo Yu came to BNL as a graduate student in 1986, earned his Ph.D. in physics from the University of Pittsburgh in 1991 and joined BNL staff in 1991. He was honored with the BNL Science and Technology Award in 2003.