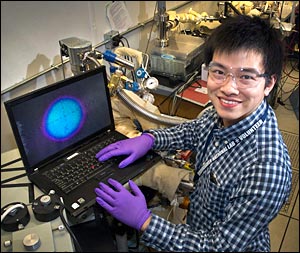 The Institute of Electrical and Electronics Engineers/Nuclear and Plasma Science Society has awarded the 2012 Particle Accelerator Science and Technology Doctoral Student Award to Brookhaven Physicist Erdong Wang for his contributions to the physics of high quantum-efficiency photocathodes. The award recognizes a student’s technical contributions to particle accelerator science and technology, as evidenced in his or her doctoral thesis.

“When I heard I received this award, I knew I did solid work,” said Wang. “I really appreciate being nominated. I am grateful for the great research environment at Brookhaven. I also want to express my gratitude to my advisor Kui Zhao at Peking University for his kind support and advice. I am sincerely thankful for IEEE/NPSS’s recognition.”

Wang’s thesis research focused on the development of photocathodes for superconducting radiofrequency (SRF) electron guns, a technology that will play a key role in an energy-conserving particle accelerator, called an Energy Recovery Linear Accelerator (ERL). A small ERL is currently being built at Brookhaven as a prototype for future accelerator technologies.

An electron gun’s function is largely dependent on its photocathode, a negatively charged probe that emits electrons when exposed to light to create an electron beam. A high current beam is created when the photocathode’s small investment of electrons is amplified by hydrogen-treated diamond in a superconducting cavity. This amplifier in a superconducting cavity supports an electron beam with a high average current and low beam degradation, as compared to beams produced by a traditional cathode.

For his thesis, Wang worked on gallium-arsenic (Ga-As) photocathodes for a superconducting gun to produce polarized electron sources. Specifically, he focused on photocathode preparation techniques and conducted systematic studies of photocathode quality. He also performed tests of the cathode using a SRF gun. Wang performed beam dynamic simulations and theoretical studies to hypothesize the electron bunch length, which affects the strength of the beam, and the effect of electron back-bombardment, a phenomenon that degrades the cathode and beam quality.

Polarized electron cathodes might be used in a proposed electron-ion collider (EIC) at Brookhaven’s Relativistic Heavy Ion Collider, an “atom-smasher” that accelerates and collides beams of heavy ion and/or protons to recreate and explore the conditions of the early universe. The idea is to use a beam of electrons to collide with RHIC’s heavy ion or proton beams to open new avenues of research.

Another facet of Wang’s thesis research was his work with diamond amplifiers, little diamond capsules that are incorporated into the gun’s structure to help produce a dense electron beam. For this construction, Wang developed a technique to reproducibly create diamond amplifiers, having studied the application of hydrogen-treated diamonds. Wang’s hypothesis, that the electron beam emission from the diamond surface depends on the applied field, was supported by experimental data and led to new information about the energy spread of the electrons inside the diamond.

The results of Wang’s research have impacts beyond the scope of his thesis, as diamond amplified photocathodes are likely to be essential for future electron guns.

The award includes $2,000 and a plaque that will be conferred at the award ceremony on Thursday, May 24, during the 2012 International Particle Accelerator Conference in New Orleans. Wang will also present his results at the conference.

Wang received his Ph.D. at Peking University. Having completed his thesis at Brookhaven, he is continuing his research at the Lab as a research associate.