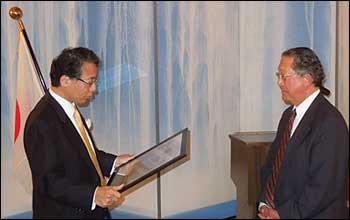 In a ceremony at the Consulate General of Japan in New York, Satoshi Ozaki, senior advisor to the BNL Director, was honored by Ambassador Sigeyuki Hiroki in recognition of his “distinguished service in contributions to the deepening of the mutual understanding and friendship between Japan and the United States.”

A news release issued by the Consulate General described Ozaki’s outstanding contributions to the design and construction of accelerators — including the TRISTAN collider at the KEK Laboratory in Japan, and the Relativistic Heavy Ion Collider (RHIC) at BNL — that has led to the realization of major machines for fundamental science on two continents, and his promotion of international collaboration for more than 30 years.

Said Ozaki, “It is highly gratifying to receive this recognition from Ambassador Hiroki, the head of the Consulate General of Japan in New York. Looking back, I have been very fortunate that I was at right places at the right time throughout my adult life. I also appreciate having had the right bosses both at KEK and at BNL, who trusted and strongly supported me, either in leading the construction of accelerator facilities for research or in promoting international collaboration at these facilities.”

BNL Director Sam Aronson, who was invited to address the company at the ceremony, said, “I have benefited from Dr. Ozaki’s advice and guidance over many years, currently as Lab Director as well as much earlier when I worked on the PHENIX experiment at RHIC. PHENIX was and is a beneficiary of Dr. Ozaki’s strong support for US-Japan collaboration at RHIC.”

Ozaki joined BNL in 1959 with an MS in physics from Osaka University, Japan, and a Ph.D. in physics from the Massachusetts Institute of Technology. His work on particle physics and major accelerator research facility development at Brookhaven led to an 1981 invitation from the National Laboratory for High Energy Physics, a research institute in Japan also known as KEK, to direct the construction of TRISTAN, the first major high-energy particle collider in the country. Under Ozaki, this $500-million project was completed on time and within budget. TRISTAN, which started operations in 1987, accelerated and stored beams of electrons and positrons at 30 billion electron volts — the highest energy in the world at the time. Furthermore, as recognized in the recent news release, Ozaki “promoted internationalization of the research at TRISTAN by facilitating participation of foreign researchers including those from the U.S. and neighboring countries in Asia.”

In 1989, Ozaki returned to BNL to head the $660 million RHIC Project, leading the decade-long development and construction of this world-class particle collider. About 1,000 physicists from around the world run experiments at RHIC, colliding subatomic particles known as heavy ions head on to study the type of matter that existed a millionth of a second after the Big Bang. Ozaki was also instrumental in bringing a polarized proton capability to RHIC with funding support from the RIKEN Institute of Japan. The first polarized proton run was achieved in 2001, celebrated by scientists from BNL, RIKEN, and collaborators from many other national and international institutions. He was also instrumental in the establishment of the RIKEN-BNL Research Center at BNL in 1997. RBRC became and remains an important RHIC physics analysis center and a hotbed of development for outstanding young physicists from Japan and the U.S.

Ozaki is a Fellow of the American Physical Society (APS) and a former Chair of the APS Forum for International Physics. His honors include the 2007 IEEE Particle Accelerator Science & Technology Award, which he won with BNL’s Michael Harrison for leadership in the successful design and construction of RHIC; and the 2009 APS Robert R. Wilson Prize, cited “For his outstanding contribution to the design and construction of accelerators that has led to the realization of major machines for fundamental science on two continents, and his promotion of international collaboration.”