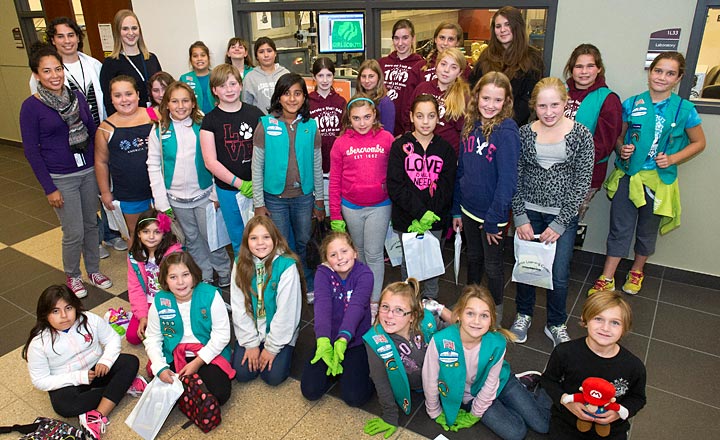 Girl Scouts from the Mastic-Shirley area visit Brookhaven Lab’s Center for Functional Nanomaterials (CFN), where they got a lesson in a nanoscience concept called scanning probe microscopy.

In celebration of the 100th anniversary of the Girl Scouts of America and the importance of science education, Girl Scouts from the Mastic-Shirley area visited Brookhaven National Lab on Monday, October 8, to learn how scientists “see the invisible.” They visited the Lab’s Center for Functional Nanomaterials (CFN), a leading research hub for the discovery and application of nanoscale materials (materials with dimensions on the order of billionths of a meter), for some lessons in fundamental nanoscience and nanotechnology. Research at the CFN focuses on the applications of nanoscience to energy-related devices, like more efficient solar cells and new kinds of transistors. 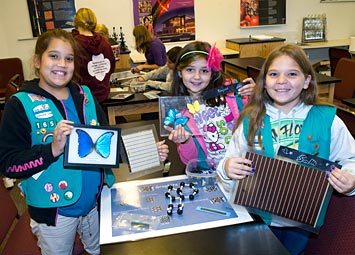 In two of the day’s experiments at Brookhaven Lab’s “Seeing the Invisible” event, the Girl Scouts learned about the iridescence of butterfly wings and the atomic structure of graphite.

The day’s events consisted of a series of experiments in which Girl Scouts from grades five through eight studied nanoscience concepts ranging from the astounding capabilities of graphene—single-atom-thin sheets of carbon atoms—to the secret behind the mysterious iridescence of butterfly wings. The Scouts also listened to the life stories of female scientists, who volunteered on behalf of Brookhaven Women in Science (BWIS), which co-sponsored the event with Peconic Bay Zonta, a local chapter of an international advocacy group that aims to improve the status of women through service and education.

“The idea behind this program is for the girls to see that science is not this far-fetched idea,” said Alexandra Pulecio, a science educator with the Office of Educational Programs (OEP) at Brookhaven. Pulecio designed the lesson plan for the Girl Scout visit so that the often-complex field of nanoscience could be simplified into lessons concerning everyday objects, like a pencil lead and its atomic structure. The educational program is one of many offered by The Portal to Discovery, a new and growing partnership between Brookhaven Lab and the Long Island Matrix of Science and Technology (LIMSAT).

In one of the experiments, Kaitlin Thomassen, a science educator with OEP, explained how scientists in 2004 were able to use an everyday object—regular adhesive tape—to separate layers of graphite into the ultrathin layers of graphene that led to the 2010 Nobel Prize in Physics. Graphene has extraordinary potential for applications taking advantage of its electrical conductivity and heat resistance. Thomassen had the scouts build their own graphite structures with plastic 3D models, and explained how graphene is stacked continuously to form the graphite found in pencils tips.

Another experiment involved a lesson in scanning probe microscopy, which is a general set of techniques that scientists use to produce an image of a specimen by moving or scanning a probe along the surface. Pulecio explained to the group that these methods allow scientists to create pictures that reveal structural details of materials at the nanoscale—more than 10,000 times smaller than the diameter of a human hair. The girls were able to simulate one type of scanning probe microscopy, called atomic force microscopy, by probing and measuring the height on different areas of an unknown object hidden inside a box. The final step was to open the box to reveal a mini Lego structure, meant to represent a “nano skyline,” and see how close their results came to accurately representing its structure.

The event helped reinforce the idea that science is a career path available to everyone. A recent study from the Girl Scout Research Institute found that 74 percent of high school girls are interested in science, technology, math, and engineering—or STEM fields. Yet only a fraction of them go on to pursue careers in those fields. During one of the study’s polls of more than 800 girls nationwide, 57 percent said they feared that they would have to work harder than men to be taken seriously.

Age 10 to 14 “is the time when things change for girls,” said BWIS co-coordinator Linda Bowerman, who is also the mother of one of the scouts who participated in the event. “They are sometimes pressured by society and peers to turn away from science, so it’s important to get them engaged.” 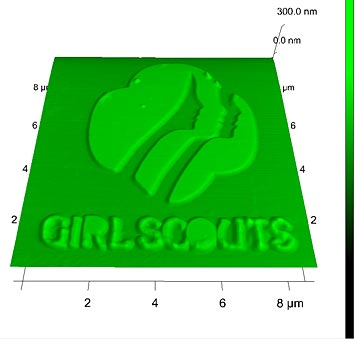 The stories told by postdoctoral scientists Katherine Jungjohann and Rosa Diaz Rivas helped reiterate the idea that a life in science requires only determination and hard work. Everyone has strengths and weakness, they said, and being perfect is not the goal. Instead, they stressed, with enough drive, anyone can overcome the barriers to a life in science or any other challenging field.

To finish off the day, Javier Pulecio, a postdoctoral scientist in the Condensed Matter Physics and Materials Science Department, gave the scouts a real-time example. He produced a nanoscale image of the Girl Scout logo using a bottom-up electron beam lithography process with a scanning probe microscope. The result was a computer screen image of a 3D logo made of cobalt stacked on a wafer of silicon measuring only 30 nanometers high! The room was left astonished, and clapping and cheering followed the unveiling. Now that the scan is complete and the image saved, the Girl Scouts can download the picture as reminder of the wonders being explored right in their neighborhood.