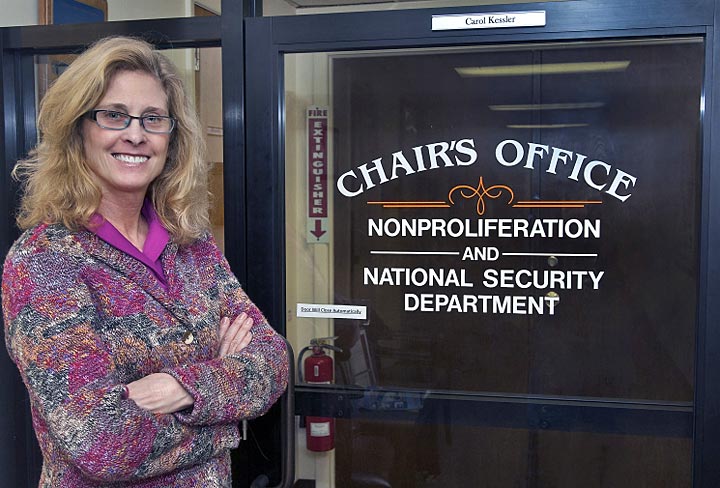 Ms. Carol Kessler is the Chair of Nonproliferation & National Security Department at Brookhaven National Lab in Upton, New York.  Prior to this appointment, Carol was the Director of the Pacific Northwest Center for Global Security at Pacific Northwest National Laboratory for seven years. The Center conducted research on nonproliferation, Asia security, and human security issues. From 2001-2003, Carol was the Deputy Director General of the Nuclear Energy Agency at the Organization for Economic Cooperation and Development in Paris, France. Carol spent 1988-2001 in the U.S. Department of State, where her focus was on nuclear nonproliferation and international nuclear safety policy.  From 1997-2000, Carol was the U.S. lead in international efforts to close the last reactor at Chernobyl, which was accomplished on December 15, 2000. She has a B.A. from Brown University in Bio-geology, an M.S. from MIT in Technology and Policy and an M.S. in National Security Studies from the U.S. National War College.

In 1972, a friend in college surprised me by saying I was wasting my talents being an art history major. She told me I should take advantage of the women's lib movement and go into science.  Now was the time for women in science. I was a bit hesitant to make such a large change and wrote my parents about the idea. I still have the letter my father wrote supporting me.  So I made the change into science (bio-geology at the time) and have gotten positive reinforcement for this decision in every step in my career.

I work on the national security priority of the Administration – nonproliferation.  Ever since I was first introduced to nonproliferation in graduate school, I have felt that I found my mission in life.  The Energy Department plays a critical role on both the technical and policy side of nonproliferation. As a graduate of the Technology and Policy Program at MIT, my work is exactly what I wanted and trained to do. I found my niche was to ensure technology and policy issues are integrated and well understood by the decision-makers because this will lead to the best decision.

I think the most important way to do this is for women who have made this career choice to make an effort to reach out to other women, especially in middle school and high school, and explain how they reached their goal and help others make the decision to do the same. Volunteering to speak at schools, at after school groups, and other informal settings is fun and rewarding.  The efforts to promote STEM education by the Bill and Melinda Gates Foundation, science museums, and other nonprofits are very valuable, especially if they reach out to parents and teachers as well as students. Parental support is vital.

Talk with women and men in the field and see what paths they followed. More often than not, each person had a different path and one or another may inspire you. Look for a mentor. One of the reasons I was able to make the career steps I made was the advice and guidance of a mentor.  Mentors can be professors, friends, or result from a chance encounter where a person you meet helps you crystallize what you need to realize to take your next career step. My chance encounter was house-sitting for a person who convinced me to go to grad school and change my life's path.

Free time? I find that hard to find. But, when it is possible, I love to travel, I find some kind of regular exercise I can do, and go to art museums to keep up with my first career interest in art history.