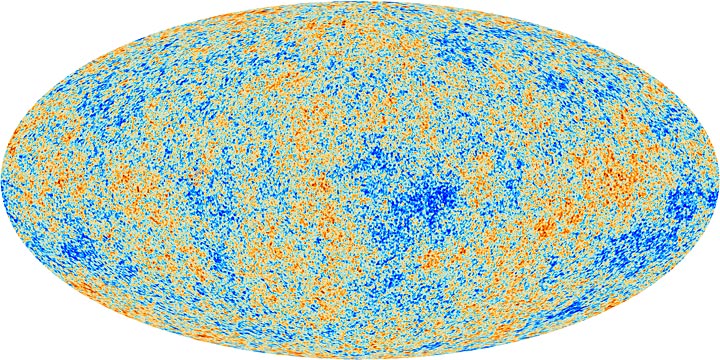 The cosmic microwave background (CMB) as observed by the Planck Satellite. The CMB is a snapshot of the oldest light in our Universe, imprinted on the sky when the Universe was just 380 000 years old. It shows tiny temperature fluctuations that correspond to regions of slightly different densities, representing the seeds of all future structure: the stars and galaxies of today. Image: ESA and the Planck Collaboration.

If a universe explodes into existence, and no one is around to hear it, does it still make a sound? The answer, according to physicist John Cramer, is a resounding yes.

"The early universe was like a hypersphere of space that was resonating with frequencies rollicking around in it," he said. Cramer, a University of Washington physics professor who also conducts research at Brookhaven's Relativistic Heavy Ion Collider (RHIC), used temperature fluctuation maps of the early universe to create a sound recording of the Big Bang as it might have sounded 14 billion years ago.

Converting data from the European Space Agency's Planck satellite mission, Cramer created a sound file based on the temperature fluctuations from the beginning of time.

The universe started as a hot ball of plasma, cooling down and spreading out as it aged. As the sound of the eruptive Big Bang dissipated, high and low intensity sound waves were imprinted on the fabric of space-time as high- and low-temperature variations in the cosmic microwave background radiation (CMB) – a remnant of the explosive birth of the universe that shows up in radio telescopes as a faint background glow permeating the entire universe.

The nature of the early universe

"The early universe was like a resonant cavity with sound waves ringing through it. It was small enough that sound could whip all the way around the universe and come back again," Cramer said.

The "bang" of the universe's debut was similar to a magnitude-9 earthquake causing all of the cosmos to actually ring. "The character of those frequencies depends on temperature, how much matter is present, and how much dark energy and dark matter are present," he said.

After the Big Bang, the universe began to rapidly stretch out, and a period of inflation expanded space. That expansion has continued at an accelerated rate, instead of slowing down as it would if gravity were the only force acting on it.  Many attribute this accelerated expansion to a mysterious force dubbed "dark energy."

To probe the nature of dark energy and its effects on our universe, physicists began measuring the cosmic microwave background in 1989 with NASA's Cosmic Background Explorer (COBE) satellite. At the time, Cramer was living in Munich on sabbatical and happened to attend a meeting of astrophysicists that took place down the street from where he was living.

"At that point, it was revealed that the small angle structure of the cosmic microwave background contained all this information about the beginning of the universe and the makeup of matter at the time," he said. "Getting that information became the gleam in the eye of all the astrophysicists."

Since then, several projects have made more and more accurate measurements of the CMB, including NASA's Wilson Microwave Anistropy Probe (WMAP) and the European Space Agency's Planck satellite. The original WMAP data set was released in 2003, from which Cramer produced his first sound recording of the creation of the cosmos. Since then, WMAP and Planck have released data that include higher frequencies and allowed Cramer to create a richer, fuller-sounding recording.

Bring in the bass

"The special thing about the early universe is that because it was so small, sound waves could propagate and come back around on themselves. As it opened up, as the universe expanded, the sound got Doppler-shifted to higher and higher frequencies," he said.

The Big Bang was a bass singer to rival all others. The frequencies of the volatile birth of the universe were so low, they were out of range of human hearing. Just to get the recording to a frequency humans can hear, Cramer had to increase the frequency of the universe's big debut by 100 septillion times.

"There's that saying from the Alien movie franchise: In space, nobody can hear you scream. The logic is that it's a vacuum and sound waves can't propagate, but in the early universe, someone could hear you scream. The medium was a lot more dense than even the atmosphere of today's Earth."

So, yes, the Big Bang made a sound, but even if we were around to hear it, we couldn't have done so without the help of modern technology.

The sounds of science at RHIC

Cramer's recording of the Big Bang was a fun side project to his work as a detector operator at RHIC. He helps manage the control room of the Solenoid Tracker at RHIC, known as STAR, which detects the thousands of particles created when colliding ion beams smash into one another.

RHIC has its own soundtrack of sorts. RHIC accelerates two beams of gold ions to relativistic speeds (very close to the speed of light) and then steers the beams into a head-on collision inside the STAR and PHENIX detectors. As the mega-machine increases the speed of the beams, they resonate, giving off their own kind of song.

Brookhaven scientists explore the universe as it existed just microseconds after the Big Bang, when the cosmos was a soupy liquid called quark-gluon plasma. In this new phase of matter, the subatomic building blocks of matter flow freely for a fleeting instant. To unleash quarks and gluons from the particles they're bound within, engineers and physicists at RHIC accelerate heavy gold ions and then smash them together.

In this annotated sound file, you can hear what it might be like to be one of the particles whizzing around the atom-smasher at practically the speed of light. This recording was created in 2005 and, in this case, the frequencies had to be reduced by a factor of 12 to put the sounds within a range audible to human ears.

If Cramer's sound file is a symphony from the start of time, RHIC physicists study the first few notes, and the sound file from Brookhaven's collider is like the conductor tapping his baton just before the performance.

From the smallest particles to the entirety of the universe, there are still many frontiers to explore in science. And they'll take all our senses – and sophisticated technology – to fully appreciate them.