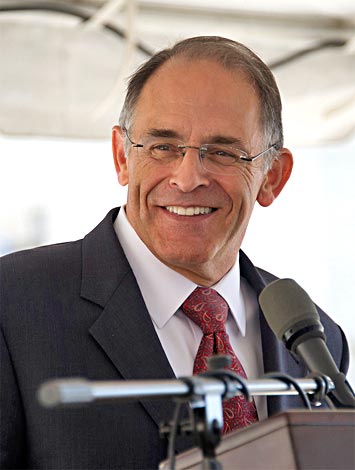 Senior Physicist Sam Aronson, who stepped down as Director of Brookhaven National Laboratory (BNL) in December 2012, has been named Director of the RIKEN BNL Research Center (RBRC). The RBRC is a physics research center located at Brookhaven and formed by an international collaboration between the Lab and RIKEN—Japan's Institute of Physical and Chemical Research. RIKEN has its headquarters near Tokyo and, like Brookhaven, is a multidisciplinary laboratory with researchers who focus on basic and applied science.

Since the RBRC was established in 1997, physicists at Brookhaven and RIKEN have worked together to address important questions in physics. To understand more about the building blocks of the universe and their origins, researchers at the RBRC have developed physics theory and analyzed data produced from particle collisions at the Relativistic Heavy Ion Collider (RHIC) at Brookhaven. The RBRC also hosts several workshops each year for collaborators and others to discuss recent results and topics.

"The RBRC has been an integral partner for the RHIC program and I am honored to take on the role of director," said Aronson.

Aronson's Role at the RBRC

"The RBRC has been an integral partner for the RHIC program and I am honored to take on the role of director."

As director, Aronson will oversee the RBRC's three research groups: the theoretical group led by Larry McLerran and Rob Pisarski, both of Brookhaven; the experimental group led by Yasuyuki Akiba of RIKEN and Abhay Deshpande of Stony Brook University; and the high-performance computing group led by Brookhaven's Taku Izubuchi. These research groups consist mainly of 25-30 fellows and postdocs from the US, Japan and other countries.

"The RBRC has a terrific track record in propelling the careers of researchers in nuclear physics worldwide," Aronson said. "I want to preserve and continue that success."

Aronson will also work with a business administrator from RIKEN; three administrative assistants; the RBRC Management Steering Committee, which consists of three representatives from RIKEN and Brookhaven's Peter Bond, David Lissauer, and Satoshi Ozaki; and three external advisory committees—one for each of the RBRC's three research groups.

Aronson is preceded by two former RBRC directors. Columbia University's T.D. Lee, who shared Brookhaven's first Nobel Prize for Physics in 1957, was the RBRC's first director from, 1997 to 2003. Nicholas Samios, who was also director of Brookhaven Lab from 1982 until 1997, directed the RBRC from 2003 until 2013. Samios, who Aronson says has been a key architect and leader of RBRC since its inception, will continue research in Brookhaven's Physics Department.

The RBRC, RHIC, and the Future

RIKEN has established centers for other areas of research at institutions in Japan, the United Kingdom, Singapore, and China, but the RBRC is the only one of its kind in the United States. Following extensive reviews of the RBRC's productivity, Brookhaven and RIKEN have approved the center's continuation every five or six years since 1997. The most recent RBRC agreement was extended in 2012, assuring operations until 2018, when another review could occur.

Through the RBRC, RIKEN has contributed more than $100 million to the RHIC research program. This investment was important in developing RHIC to be the only collider in the world that can collide polarized protons—a critical tool for RIKEN's aims in nuclear physics, particularly in understanding more about the proton's "missing" spin. RIKEN and other collaborators also use RHIC, the last operating collider in the United States, to explore properties of the quark-gluon plasma that existed in the universe's first microseconds, as well as the "lattice quantum chromodynamics" approach to investigating the strong force that holds together quarks and gluons that make up 99 percent of visible matter.

RIKEN, RBRC, and Brookhaven scientists are also conducting research and development for ongoing operations and upgrades at RHIC. These exciting endeavors include a possible electron-ion collider, called "eRHIC" — an electron storage ring, and detector upgrades to the existing RHIC accelerator complex for  colliding electrons with heavy ions. eRHIC would be a cost-effective, next-generation tool to probe more deeply the unanswered mysteries of the subatomic world.

Looking ahead, Aronson is also interested expanding the collaboration between Brookhaven and RIKEN at the RBRC to explore other areas of science.

"Brookhaven and RIKEN are both multidisciplinary laboratories that have a number of overlapping areas of research, including energy, life sciences, and cosmology," Aronson said. "These shared interests are opportunities to make a bigger, broader collaboration that could benefit researchers at both institutions, and future generations."