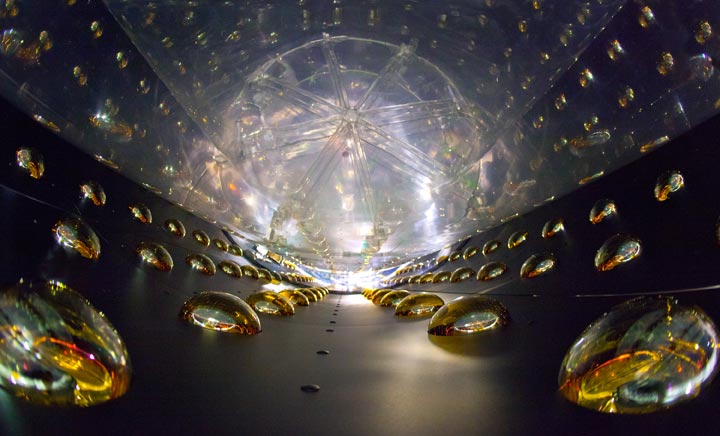 Photomultiplier tubes lining the walls of the Daya Bay neutrino detector. The tubes are designed to amplify and record the faint flashes of light that signify an antineutrino interaction. This experiment aims to measure the final unknown mixing angle that describes how neutrinos oscillate — another chapter in Brookhaven National Laboratory's long history of neutrino research over the last several decades.

In recognition of the early and ongoing success of the Daya Bay Reactor Neutrino Project, the U.S. leaders in the international project received one of the U.S. Department of Energy's (DOE) top 2012 Project Management Awards—the Secretary's Achievement Award. Lawrence Berkeley National Laboratory and Brookhaven National Laboratory played leading roles in the experiment, from planning the scientific mission to helping build the detectors.

The award recognizes the national labs for overcoming "management challenges associated with working in a multicultural collaboration at a foreign location to successfully deliver the U.S. contributions." The DOE release goes on to note that the experiment, which includes Brookhaven Lab's Steve Kettell as chief scientist, was able to publish precise measurements after just two months of operation, an achievement that "would not have been possible without the keen insight, dedication, and professionalism of the United States Daya Bay project team."

In addition to detector design and engineering efforts, Brookhaven chemists perfected the "recipe" for the liquid scintillator that interacts with the antineutrinos in the Daya Bay detectors. Brookhaven Lab' Ralph Brown (now retired) oversaw the detector design, construction, and installation as Chief Engineer during most of the construction project, and Ron Gill ensured that the international project met appropriate safety standards as Safety Officer. Brookhaven physicists have also been leading the development of software and the data analysis that led to this important result.

Neutrinos—ghostlike particles that flooded the universe just moments after the Big Bang—are born in the hearts of stars and other nuclear reactions. Untouched by electromagnetism and nearly as fast as light, neutrinos pass practically unhindered through everything from planets to people, only rarely responding to the weak nuclear force and the even weaker gravity. Tracking these particles and their oscillations between three distinct flavors represents a great challenge that offers clues to the birth of the universe.

Six reactors in southern China's Daya Bay site churn out millions of quadrillions of harmless electron antineutrinos every second, which are first detected in massive chambers close to the reactors. The scientists then measure the number of electron antineutrinos that seem to vanish on their way to more distant detectors—actually transforming into other neutrino flavors. Observation of this electron antineutrino disappearance at Daya Bay allowed scientists to measure the value of the "mixing angle" that describes the particle transformations in the 3-flavor neutrino model that has emerged over the last two decades.

The observation of the transformation measured at Daya Bay iscritical to understanding if neutrinos and antineutrinos exhibit a symmetry breaking known as charge-parity (CP) violation, which may ultimately explain why the Big Bang embraced matter over antimatter. Further investigation of this fundamental question will be carried out by the Long-Baseline Neutrino Experiment (LBNE), which will measure an intense beam of neutrinos first produced at Fermi National Accelerator Laboratory in Illinois and then detected 800 miles away in South Dakota.