Some of the 200 attendees who trekked to Brookhaven Lab—some from as far as Africa, Asia, and Europe—for four days of workshops and sessions during the 2013 RHIC & AGS Users' Meeting

Scientists from 20 countries use the Relativistic Heavy Ion Collider (RHIC) at Brookhaven Lab in the quest to answer big questions about the origins of matter and mass. In late June, 200 of those scientists from the RHIC and Alternating Gradient Synchrotron (AGS) user communities trekked to the Lab—some from Africa, Asia, and Europe—for four days of workshops and sessions during the 2013 users’ meeting, titled “Accelerating Discovery: A Collider for Hot Science.”

They discussed new results from an array of particle collisions at RHIC and topics such as proton spin, hard probes in heavy ions, non-equilibrium effects at RHIC and the Large Hadron Collider, and upgrades to the PHENIX and STAR detectors.

This was Berndt Mueller’s first users’ meeting as the Associate Laboratory Director (ALD) for Nuclear & Particle Physics at Brookhaven.

“Our users continuously generate new ideas for experimental measurements, challenging us to enhance capabilities at the RHIC-AGS complex to facilitate new scientific discoveries in the years ahead,” Mueller said. “Users are the lifeblood of this facility and that’s why this annual meeting is so important.”

The meeting began two weeks after the conclusion of Run 13 at RHIC, which featured 13 weeks of collisions between polarized protons at the 510 billion-electron-volt (GeV) level. The entire run, with beams circulating and the time required for cooling RHIC’s magnets to a frigid four degrees Kelvin (-452 degrees Fahrenheit), lasted a little more than 17 weeks this year.

At the start of the first full day of plenary sessions on June 27, Vahid Ranjbar of the Tech-X Corporation, who served as run coordinator for the Collider-Accelerator Department (C-AD), reported that the C-AD team attained record luminosities and intensities during Run 13. Run Coordinator for the PHENIX Collaboration Hubert Van Hecke of Los Alamos National Laboratory reported that PHENIX collected data from nearly 15.7 billion events and used new tools to achieve the goal of accumulating a definitive data set with polarized protons at 500 GeV. Run and Operations Coordinator for the STAR Collaboration Bill Christie from Brookhaven Lab reported that STAR also achieved and surpassed its data-taking goals—they actually accumulated 147 and 170 percent of the target data sets—while installing and commissioning several new systems and subsystems for the detector.

A Message From the Director

As he took to the stage, Lab Director Doon Gibbs commended the entire nuclear science community—RHIC and AGS users, as well as those at the Continuous Electron Beam Accelerator Facility (CEBAF) at Jefferson Lab in Virginia and planned Facility for Rare Isotope Beams (FRIB) at Michigan State University—for communicating with stakeholders, from policymakers to the public, about the importance of nuclear science.

Before presenting an overview of the Lab and its long-term priorities, Gibbs said, “It’s been a good year for RHIC and the results I’ve seen are very interesting. Keep your head in the game—I mean that safety-wise as well as nuclear-science-wise—and continue to light the sky with your results.”

Briefings From Beyond RHIC and the AGS

During a special session the day before the main plenary, ALD Mueller joined representatives from CEBAF, FRIB, and other nuclear physics research areas to provide overviews of their programs. The talks included details about an array of topics including a future electron-ion collider, fundamental symmetries and neutrinos, and computational nuclear physics.

Also during the meeting, officials from the U.S. Department of Energy (DOE) and the National Science Foundation (NSF) discussed their organizations’ objectives, achievements, and challenges.

DOE Office of Science Associate Director for Nuclear Physics Timothy Hallman explained that DOE’s nuclear physics program was originally slated to receive $550.7 million in appropriations under a continuing resolution in fiscal year 2013, but that amount is now estimated to be $30 million less due to the sequester that took effect at the beginning of this calendar year.

Noting the President’s request for an increase to nearly $570 million for fiscal year 2014, Hallman said, “That is a very positive thing and we certainly appreciate the support that the community has been giving—in terms of communicating why nuclear science is important and why those dollars are well spent.”

“The community’s efforts certainly need to continue. We are not out of the woods,” Hallman said.

“The NSF’s Physics Division got a 10 percent cut from the 2012 budget,” Mignerey said, explaining that NSF’s first priority is to protect commitments to NSF’s core mission and maintain existing awards. Mignerey then provided updates and highlighted funding still available despite the budget cut. These opportunities could still benefit meeting attendees in areas including accelerator science, instrumentation, physics computing, nuclear detection, and work-life balance. 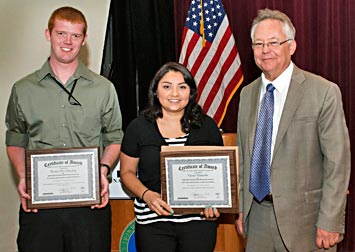 During the meeting, Director Gibbs also recognized two Ph.D. students for outstanding research conducted at Brookhaven’s accelerator facilities—Cristel Camacho of the University of Texas Southwestern Medical Center at Dallas and Darren McGlinchey of the University of Colorado at Boulder. Each honoree received a certificate and a check for $3,000, and both gave presentations on their research.

Camacho used the NASA Space Radiation Laboratory (NSRL) at Brookhaven to study radiation damage in biological tissue and catalogue the different effects of gamma and iron ion radiation. She identified the loss of three specific chromosome sequences as a first step in initiating mutations and permanent damage as well as the possible formation of tumors.

Mei Bai of Brookhaven Lab is now past chair of the UEC. Outgoing members include Brant Johnson and Lijuan Ruan from Brookhaven, Gang Wang, University of California at Los Angeles, Kolja Kauder, University of Illinois at Chicago, and Maya Shimomura, Iowa State University.