Brookhaven Researchers Use Weekends to Teach Math and Physics at SchoolNova 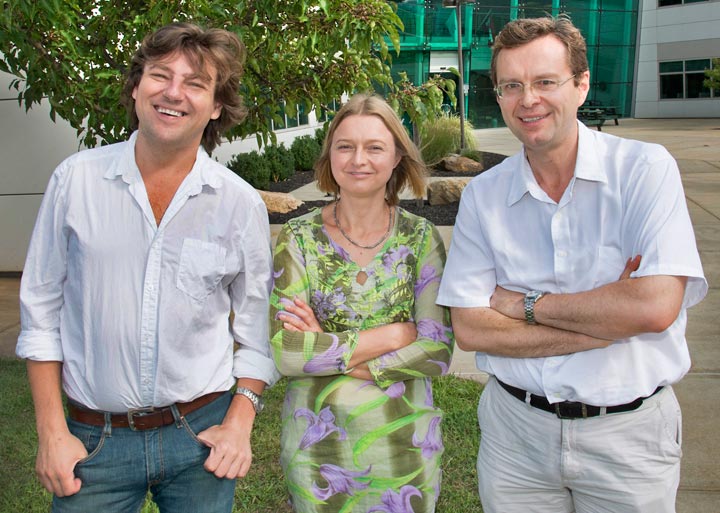 For the past two years, Igor Zaliznyak’s Saturday night routine has included staying up late and putting together worksheets filled with algebraic expressions and calculus theorems. Come Sunday morning, he’s up early and off to Stony Brook University to teach high schoolers mathematics as a part of a weekend enrichment program called SchoolNova. A physicist during the week, Zaliznyak is one of several Brookhaven National Laboratory employees who offers up his weekends to help instruct some 200 students ages 3 to 16 on a variety of subjects from mathematics and physics to foreign languages and art.

“We teach because we feel that we were given, at these kids’ age, a precious gift—a key to the chest of knowledge. And we feel that we have to pass it on,” said Zaliznyak. “SchoolNova is about passing on that knowledge and excitement we received at a young age to a new generation.”

A collaboration between scientists who work at Brookhaven Lab and professors from Stony Brook University, SchoolNova operates with the intention of helping children from across Long Island acquire the skills and knowledge necessary to increase their interests in academics. It also aims to better prepare the students for transitioning into college.

The program runs concurrently with the academic year and expands upon the subject material that the students learn in school. Class sizes are small and divided based on the students’ competence in the subject matter. Lessons start Sunday morning around 9 a.m. and end by 2 or 3 p.m. and typically run for between 45 minutes to an hour and a half each. In class, students tackle problems together in small groups and after the half day is done, they go home to complete homework assignments.

Zaliznyak joined the SchoolNova team after having enrolled his daughter in the Sunday program. Like many other BNL scientists who also participate with SchoolNova, Zaliznyak started off teaching mathematics to his daughter’s class and then went on to teach the subject to other grades as well. He thinks that the great minds at Brookhaven have so much to offer to these students.

“I feel that Brookhaven and Stony Brook University are two of the most important sources of academic talent on Long Island,” said Zaliznyak. “Brookhaven is important because it employs a plethora of outstanding scientists who have these keys to the chest of knowledge and who could now pass these keys to the kids who are our next generation and our future.”

SchoolNova started as an informal school in 2001 that originally taught math, arts and Russian language to Russian heritage students. But it soon evolved into a multidisciplinary learning program with a community of people who believe in science and math education for young kids, and want to contribute to it. Spearheading the program was Marina Polonskaia, the program’s director, who helped recruit scientists like Zaliznyak to teach. Like Zaliznyak, many of the teachers first had their own children enrolled in SchoolNova before taking more proactive positions as members of the faculty.

“The breadth of coverage that students learn at a general school is tremendous – however the depth of it is rather shallow,” Zaliznyak said. “They know formulas, but almost no formulas they know how to derive.” In his class Zaliznyak stresses the importance of showing his students where their equations come from and how to derive them themselves. He says that the approach taken at SchoolNova helps students better understand how to apply what they are already learning in school.

Alexei Tkachenko, a materials scientist at Brookhaven’s Center for Functional Nanomaterials, also focuses on bringing practical examples into the classroom when he teaches physics in the SchoolNova program. A typical lesson could involve using strings on a guitar to demonstrate the concept of standing waves, or vibration patterns, or creating graphene with the use of pencil lead and scotch tape.

“One might think that teaching elementary physics must be boring for someone who does physics for a living, but that’s not true,” said Tkachenko. “There are nontrivial and beautiful things about the foundations of physics, and I enjoy rediscovering them with my students.”

Like Zaliznyak and Tkachenko, Oksana Ivashkevych, an application engineer in Photon Sciences at Brookhaven, used to bring her own kids to SchoolNova until she realized that she too could contribute to the community. Last year she taught 4th grade math and this year she will be continuing with her class, teaching 5th grade math.

“What I try to accomplish with my lessons is to bring puzzles and excitement about science and math to my students,” she said. “And of course I learn every moment as well. Being with the kids enriches me.”

And after the School Nova academic year ends in mid-June, many of its staff teachers and their colleagues from Brookhaven Lab, Stony Brook, and a variety of other places pack for a week-long sleep-away science camp, called Sigma Camp, for kids ages 12-15. According to Zaliznyak, children from New York, New Jersey, Massachusetts, and Illinois come for a week of intense instruction, hands-on science activities, and summer fun, at a picturesque Long Island retreat site on Shelter Island.

At Sigma Camp this summer, Zaliznyak conducted a course on the basics of radioactivity and on detecting particles and fields. The dozen or so students that he taught learned about isotopes, protons, and neutrons, and built real particle detectors. Tkachenko and Zaliznyak’s wife, Tanya, who is a science associate in the Pharmacology Department at Stony Brook, taught the kids a class on the physics of cooking.

“For us staff, this is an opportunity to invest our vacation time in advocating science to kids and engaging youngsters in science activities and experimentation,” Zaliznyak said. “I think this is a vacation time well spent!”