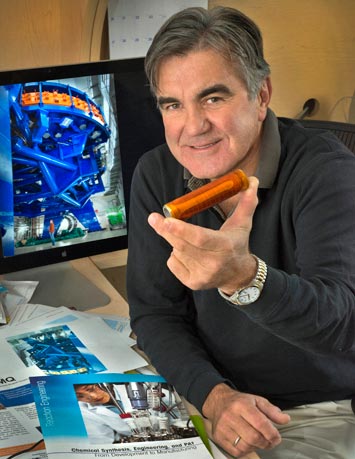 Replace a 135-ton magnet used for cancer-fighting particle therapies with a magnet that weighs only two tons?

Such a swap is becoming possible thanks to new particle accelerator advances being developed by researchers at Brookhaven Lab. With an approach that combines techniques used by synchrotron accelerators with the ability to accept more energy, these new technologies could be used for more than fighting cancer. They could also decrease the lifecycle of byproducts from nuclear power plants and reduce costs for eRHIC—a proposed electron-ion collider for Brookhaven Lab that researchers from around the world would use to explore the “glue” that holds together the universe’s most basic building blocks and explore the “proton-spin puzzle.”

On Tuesday, Oct. 22, join Dejan Trbojevic of the Collider-Accelerator Department for the 489th Brookhaven Lecture, titled “Doing More With Less: Cost-effective, Compact Particle Accelerators.” All are invited to attend this free talk, which is open to the public and will be held in Berkner Hall at 4 p.m. Refreshments will be offered before and after the lecture. Visitors to the Lab 16 and older must carry a photo ID while on site. Add to calendar

To join Trbojevic for dinner at a restaurant off site after the talk, contact Pamela Manning (Ext. 4072).

During this lecture, Trbojevic will provide an overview of accelerator technologies and techniques—particularly a non-scaling, fixed-focused alternating gradient—to focus particle beams using fewer, smaller magnets. He will then discuss how these technologies will benefit eRHIC and other applications, including particle therapies being developed to combat cancer.

Trbojevic earned a Ph.D. in physics at Georgetown University in 1984. He was a postdoc at Fermilab from 1984 to 1986 participated in commissioning the Tevatron particle collider, and was group leader for the Tevatron’s main ring from 1990 to 1992. An expert in designing, commissioning, and operating accelerators, he arrived at Brookhaven Lab’s Collider-Accelerator Department in 1992, served as head commissioner for the Relativistic Heavy Ion Collider from 1999 to 2000, and received tenure in 2007. He was made a fellow of American Physical Society in 2003, has several patents, and authored or coauthored 100 scientific papers, some of which were published in Nature Physics and Physical Review.