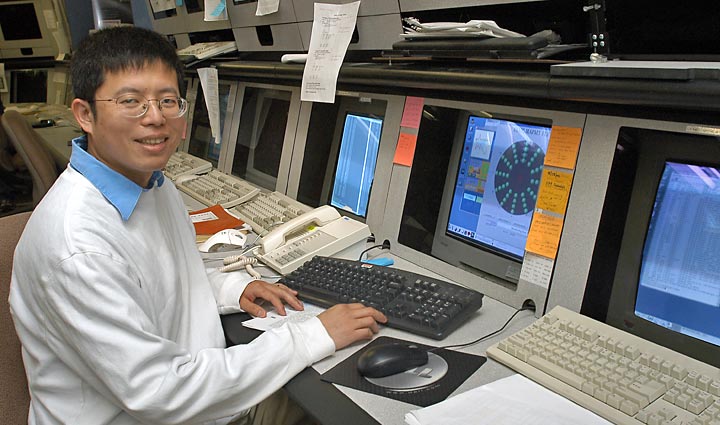 Ever wonder how the hot soup of subatomic particles that filled the early universe transformed into the ordinary matter of today’s world? Nuclear physicists exploring this question can’t exactly travel back 13.8 billion years to watch what really happened, but they can recreate matter at the extreme temperatures and densities that existed just after the Big Bang by smashing together ordinary atomic nuclei at the Relativistic Heavy Ion Collider (RHIC). At peak performance, this extraordinarily versatile atom smasher at the U.S. Department of Energy’s Brookhaven National Laboratory reproduces the primordial soup thousands of times per second. Using sophisticated detectors to track what happens as exotic particles emerge from the trillion-degree collision zone and “freeze out” into more familiar forms of matter, scientists are turning up interesting details about how the transition takes place.

“RHIC gives us the ability to explore what happens over a very wide range of collision energies.”

“RHIC gives us the ability to explore what happens over a very wide range of collision energies,” said Zhangbu Xu, spokesperson for RHIC’s STAR collaboration, one of two groups of physicists conducting experiments at RHIC using house-sized particle detectors. In a paper just accepted for publication in Physical Review Letters, STAR data suggest that the type of transition changes depending on the energy the particles have when they collide. 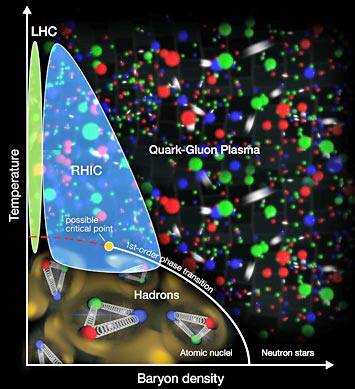 Scientists expected to see different phases of nuclear matter at RHIC, based on their understanding of the strong force, aptly named because it is the strongest force in Nature. The strong force is what normally binds the constituent building blocks of the protons and neutrons that make up atomic nuclei—quarks and gluons. At ordinary conditions of temperature and density, it keeps quarks confined in composite particles known as hadrons (protons and neutrons are both hadrons). But as the temperature or density rises, the hadrons “melt” to free the quarks. Freeing quarks so scientists could study their unbound interactions was one of the main reasons RHIC was built.

Mapping out the process of melting (and refreezing) nuclear matter can be likened to mapping out the familiar phases of water—solid ice, liquid, and gaseous vapor or steam. Just as you can plot points on a graph of temperature and pressure to show which phase of water exists for each combination of these variables, and lines that delineate the change that takes place between the phases (melting/freezing, evaporation/condensation), physicists have drawn up a tentative “map” of the phases of nuclear matter.

But plotting the actual points and transitions on this nuclear phase diagram—and understanding what happens at the boundaries between phases—requires conducting experiments that produce a wide range of extraordinary temperatures and densities. RHIC has the versatility to do just that, colliding two beams of gold nuclei (each made of 197 protons and neutrons) at energies from 7.7 billion electron volts (GeV) per colliding hadron pair to 200GeV. Results from this “beam energy scan” as analyzed by STAR are revealing the varying nature of the nuclear phase change.

From continuous to sudden

History of the Search for Signs of Latent Heat

The search for signs of a phase transition in hot nuclear matter like the one that happens when water boils (a first-order phase transition) has a history going back at least two decades. In the 1990s, theorists predicted a phenomenon called “softest point collapse,” where the pressure of the excited nuclear matter would show a sudden drop and then increase again as nuclei were collided over just the right narrow range of energies. Experiments at Brookhaven’s Alternating Gradient Synchrotron (AGS) searched without success; the energy of the AGS was too low.

When RHIC began operating in 2000, the opposite problem obscured the search—the full RHIC energy was too high to see any sign of the softest point. Beginning around 2009, accelerator physicists at RHIC developed ways to run the collider at lower energies than it was initially designed for, but still higher than the top AGS energy. For the first time, this opened up the sweet spot in energy where there is the best chance to discover the elusive first-order phase transition.

At RHIC’s highest energies, where the colliding particles produce temperatures around 4 trillion degrees Celsius, there is a smooth crossover transition where distinct phases do not exist. So, unlike melting ice, which happens at a particular temperature where some molecules exist distinctly as solid ice and some as liquid water during the transition, the transition between normal nuclei and a hot soup of free quarks occurs in a more gradual, continuous way.

Think of a substance like honey: If you store the jar in a refrigerator, the honey is essentially solid; but when you place the jar on the counter, the honey softens and eventually liquefies as its temperature gradually rises. The change between solid and liquid doesn’t take place at a distinct “melting point.” Instead, the phases smoothly transform from one to the other.

Because the phases are “smeared” in a crossover transition, scientists don’t even draw a solid line on the nuclear phase diagram to delineate a border between ordinary nuclear matter and the superhot “quark-gluon plasma” of the early universe created at RHIC’s highest collision energies. But at lower energies, where quark-gluon plasma is created at relatively cooler temperatures, the STAR data show signs of a sharper border—what is called a first-order phase transition analogous to the familiar transitions between the phases of water.

The defining characteristic of a first-order phase transition is “latent heat”—a large amount of energy going into or being released by the matter as molecules or particles are transformed from one phase to another at particular combinations of temperature and density.

“If you think of a pot of water on a burner,” said STAR physicist Jamie Dunlop, “the temperature goes up until you reach the boiling point—100 degrees Celsius under normal atmospheric pressure. The liquid water will stay at exactly that temperature as long as there’s water to boil. Even though the stove keeps adding heat, all that energy, the latent heat, goes into moving molecules of water from the liquid to the gaseous state until all the molecules have gone through the transition. So the phase change from liquid water to gas shows up as a temporary stop in the rise in temperature, which resumes once all the water molecules are in the gaseous state.”

In the case of the matter at RHIC, the first-order phase change shows up as a temporary disappearance of a particular kind of particle flow observed coming out of collisions.

“When we collide gold nuclei at RHIC, we observe particles flowing in a variety of ways from the point of the collision,” said Yadav Pandit, who produced these results as a graduate student at Kent State University. Pandit is one of hundreds of young scientists who have earned PhDs in physics by conducting detailed studies of RHIC collision data—in his case, by analyzing STAR data on one particular type of particle flow, called directed flow, that is due to the residual motion of the particles that make up the colliding nuclei.

You can think of directed flow as similar to drag: If two gold nuclei collide off-center and heat up the surrounding area, pressure from the sudden expansion produces a twist in the momentum distribution of the particles as they continue on their way in opposite directions.

“When the collision takes place at an energy close to a first-order phase transition, the expansion and the resulting deflection of the emitted particles is ‘softened,’” said Pandit, now a postdoctoral fellow at the University of Illinois. “Energy that would normally expand the system is instead going into changing the state of matter—melting the hadrons to free the quarks and gluons.”

The STAR data show that directed flow is strong at both the lowest and highest RHIC energies. But somewhere between 10 and 20 GeV, STAR observes a sudden switch in the twist of particles. The directed flow disappears, allowing other types of flow previously masked by the strong effect of drag to show up in particle distribution patterns. That disappearance, or collapse, of directed flow—when the expansion stops and then resumes once all the matter has gone through the change—is the “latent heat” signature of a first-order phase transition the physicists were looking for.

As the scientists continue their analysis of directed flow, they are also searching for signs of what is called a critical point.

“Critical points exist where a phase transition transforms from the abrupt, first-order kind to a continuous crossover,” said STAR physicist Gene Van Buren of Brookhaven. “You can think of these as endpoints on the lines that delineate phases in the phase diagram.

“When matter exists in conditions near critical points, its behavior becomes erratic, leading to increased fluctuations in measurable quantities that are generally stable during phase changes. In the case of the transition from hadronic matter to quark-gluon plasma at RHIC, we are looking for large fluctuations in particle production patterns emerging from the collisions.” 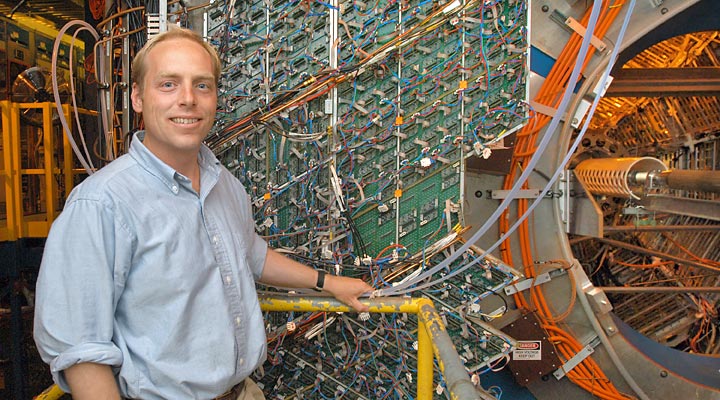 Brookhaven/STAR physicist Jamie Dunlop in front of the STAR detector

Fortunately, says STAR’s Dunlop, these signals and the observed disappearance of directed flow appear to occur in a region of the phase diagram where RHIC physicists have the potential to produce more collisions. More collisions should narrow the variability of the data and provide more definitive answers.

Two improvements, one to the RHIC accelerator and the other to the STAR detector, will make this possible.

The first, called electron cooling, will keep bunches of nuclei in RHIC’s two beams more tightly packed. Tightly packed nuclei are more likely to collide when the two beams cross; more collisions will help scientists see how strong these signals are and narrow the errors associated with their findings.

The other improvement is a proposed upgrade to increase the “acceptance” of the STAR detector—its ability to measure particles coming out at angles closer to the direction of the colliding beams.

Right now STAR has good particle detection at angles up to 50 degrees off vertical (straight up and down compared to the beams’ horizontal direction). The upgrade would open the “window” for measuring particles another 15 or so degrees in each direction, forward and rearward. That larger window gives scientists access to more particles, again decreasing errors. It also decreases the scientists’ need to extrapolate from what they observe in the particles they can detect to infer what happens with particles emerging closer to beam.

These upgrades are just two examples of the continuing vitality and versatility of RHIC. With each experimental run, intriguing findings raise new questions—and RHIC physicists develop and employ innovative approaches to explore the subtle details of physics phenomena that were previously out of reach.

You could say the machine itself continues to evolve as physicists delve deeper into the evolution of the unique early-universe matter they are creating at RHIC.