NOTE: The BERA Amateur Radio Club will host its next entry-level "Technician" class on Mondays and Wednesdays at noon in the Information Technology Division seminar room (Bldg. 515) starting Monday, Oct. 13. More information is available here (PDF) and on the club website. You can register by emailing Gary Stevens (Ext. 7779). 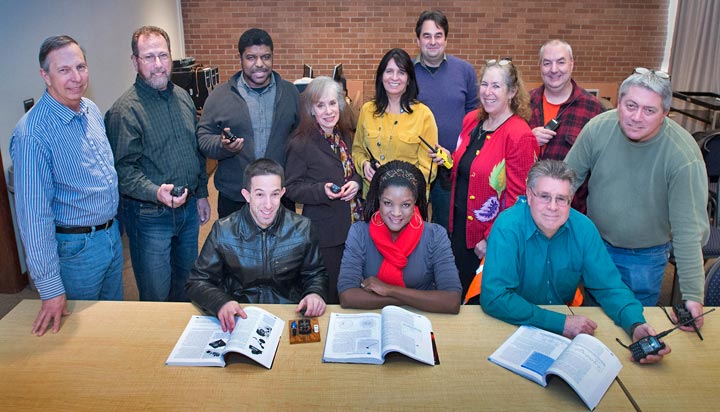 There are 22 new hams at Brookhaven Lab—not Grade-A certified swine, but licensed amateur radio operators—thanks to the BERA Amateur Radio Club, which offered a three-month series of on-site classes last fall. With their new certifications, these hams have met the Federal Communications Commission’s basic licensing requirements for using specific radio frequencies to communicate with other amateur radio operators, including those across town or even aboard the International Space Station.

The Amateur Radio Club will host a new series of entry-level classes in the ITD seminar room (Bldg. 515) on Mondays, Wednesdays, and Fridays at noon starting on Monday, Jan. 27. Those with a Technician license who would like to earn the second classification, the General license, can begin classes right away. Registration is required. For more information and to sign up, contact Gary Stevens (KD5SFQ).

The 22 new hams at Brookhaven earned Technician level licenses, the first in a series of three classifications that come with increasing privileges. Amateur Radio Club members Gary Stevens of the Information Technology Division (ITD) and Nick Franco of the Collider-Accelerator Department, who hold licenses for all three classification levels, hosted the on-site preparation classes three days a week starting in early September before they administered the official 35-question exam on Nov. 23.

“I remember not being able to dial out or receive information using a landline or cell phone immediately after the attacks on September 11 and Superstorm Sandy but when all else fails, amateur radio operators can send and receive important information,” said Stevens, who identifies himself on the airwaves with his call sign KD5SFQ. At Brookhaven, Stevens is a LINUX system administrator who oversees the secure network gateways that scientists around the world use to access the Lab’s Blue Gene supercomputers, clusters, and other computing systems for scientific research.

During the introductory course, participants covered 22 different subject areas, including the basics of radio signals and waves, electricity and equipment components, lingo, and licensing regulations. Safety was an important component, because hams must mitigate hazards of working with electricity, radio waves, antennas, wires, and support systems.

Kahille Dorsinvil, an educator at the Lab’s Science Learning Center who earned her technician-level license after completing the course on site, said, “This amateur radio class helped me understand more about radio waves, electricity, and electronics—which helps when I develop and teach educational programs based on the Lab’s energy research for students from grades one to 12.”

Lots of Fun and Lots to Learn

“Some hams like to talk to each other by bouncing radio signals off the moon or sending Morse code between Long Island and South Africa,” said Franco, whose call sign is KF2P. “Other hams like preparing for emergencies or restoring vintage equipment. There are so many ways to have fun with amateur radio.”

“With clubs and all sorts of competitions, amateur radio can be a lifelong hobby, because there’s so much to learn and so many people to meet around the world,” he added.

In addition to teaching classes about amateur radio, Stevens, Franco, and other members of the BERA Amateur Radio Club volunteer their radio services with the National Weather Service’s SKYWARN program. They help keep their local communities safe using amateur radio to provide the National Weather Service with timely and accurate reports of severe storms.

Stevens and Franco welcome both experienced and inexperienced newcomers to the Amateur Radio Club, one of many BERA clubs on site. The club maintains a signal repeater and other equipment for its members, who meet regularly in person and via the airwaves. Club members also simulate emergency operations with hams around the world during the Amateur Radio Relay League’s Field Day every June.

The Amateur Radio Club will host another series of entry-level classes beginning on Jan. 27. Classes will meet at noon in the ITD seminar room (Bldg. 515) on Mondays, Wednesdays, and Fridays.

Those with a Technician license who would like to earn the second classification, the General license, can begin classes right away.