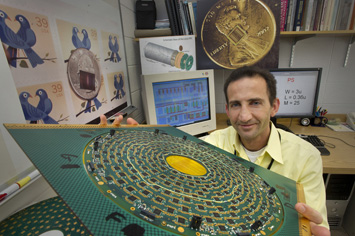 Gianluigi De Geronimo, an electrical engineer in Brookhaven Lab's Instrumentation Division, was awarded tenure for developing state-of-the-art microelectronics that have become transformational by enabling new concepts in detectors used by collaborators at the Lab, and in academia and industry.

Veljko Radeka, head of the Instrumentation Division at the time De Geronimo was granted tenure, said, "It is rare for one person to originate an idea and then perform the simulation, experimental verification, and integration for an instrument. Gianluigi has the unique ability to do this, and has applied it for advancements in fields ranging from particle, neutron, and synchrotron physics to medical imaging and homeland security."

De Geronimo develops and designs application specific integrated circuits (ASICs) that can detect extremely small quantities of electrical charge in very short intervals of time. De Geronimo and the ASIC development group he leads designed microelectronics found in the ProxiScan™ camera that can identify prostate cancer in its early stages and the high-resolution x-ray "Maia" detector used to map specific elements in materials and artwork. The team also developed ASICs for experiments at the National Synchrotron Light Source (NSLS), NSLS-II, and Relativistic Heavy Ion Collider at Brookhaven Lab, as well as the ATLAS detector at the Large Hadron Collider in Europe.

In addition, De Geronimo and the team solved the challenge of operating complementary metal–oxide–semiconductor (CMOS) devices and ASICs in frigid liquid argon—a critical contribution for large liquid-argon time projection chambers in neutrino experiments, including the future Long-Baseline Neutrino Experiment and other noble-liquid-based detectors.

De Geronimo earned a Ph.D. in electronics and communications from Milan Polytechnic in Italy in 1997. That same year, he began working at Brookhaven Lab's Instrumentation Division. De Geronimo holds or shares 13 patents and two R&D 100 Awards. Battelle, the global science and technology organization that manages Brookhaven Lab with Stony Brook University (SBU) through the company Brookhaven Science Associates, recognized De Geronimo as an "Inventor of the Year" in 2013. De Geronimo is also an adjunct professor for SBU's Department of Electrical and Computer Engineering.