Brookhaven Science Associates (BSA), the company that manages Brookhaven Lab for the U.S. Department of Energy, granted tenure to this scientist and eleven others since 2012. Tenure appointments are made after a rigorous selection procedure culminating in a comprehensive review of each tenure case by the Brookhaven Council, an elected body that advises the Director on matters of concern to the scientific staff. The BSA Science & Technology Steering Committee oversees the tenure process and makes final recommendations to the BSA board. Meet the other scientists... 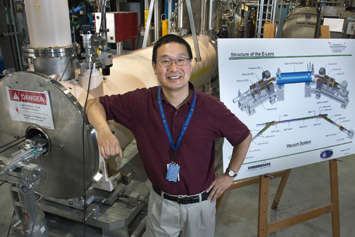 Physicist Yun Luo of Brookhaven Lab's Collider-Accelerator Department was granted tenure for his contributions in designing, constructing, and operating complex user facilities, and his overall contributions to accelerator science.

"Yun Luo's unprecedented advances benefit not only the Relativistic Heavy Ion Collider, but also the Large Hadron Collider, as well as future particle colliders," said C-AD Chair Thomas Roser. "Yun's great ingenuity, expertise, and dedication have been crucial in attaining the present RHIC performance, and they will be equally crucial in pushing this performance to its limits."

Luo proposed and implemented continuous global and local coupling correction techniques that solved a long-standing limitation for high-energy colliders like the Relativistic Heavy Ion Collider (RHIC) and the Large Hadron Collider. His work enabled operational use of combined tune and coupling feedback system, without which the 250 GeV polarized proton program at RHIC would not have been successful.

Luo also carried out detailed simulations for electron lenses, which are being developed to increase luminosity—the collision rate—at RHIC. These lenses use negatively charged electrons to pull together the positively charged protons and counteract the protons' tendency to repel each other during the collisions. In addition, Luo was the run coordinator for the heavy ion portion of the RHIC run in 2012, during which the first-ever and highly successful uranium-uranium and copper-gold collisions occurred. With the new lattice configuration that Luo proposed, plus full implementation of the stochastic cooling technique, nearly all particles were consumed in collisions—an ideal condition for high-energy collisions and a first for particle colliders.

Luo earned a Ph.D. in physics from the Institute of High Energy Physics at the Chinese Academy of Science in 2000. From 2000 until 2002, he helped design the Large Hadron Collider at the European Nuclear Research Facility (CERN) in Europe before returning to the Institute of High Energy Physics in 2002. He joined Brookhaven Lab's Collider-Accelerator Department as a research associate in 2003 and was made an assistant physicist in 2005, associate physicist in 2007, and physicist in 2009.