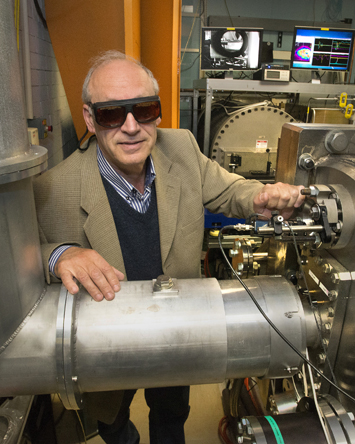 Igor Pogorelsky, a physicist at Brookhaven Lab’s Accelerator Test Facility (ATF), was awarded tenure for his significant achievements in accelerator science and his strong contribution to establishing the ATF as a leading U.S. user facility for advanced accelerator research and development.

“As a lead scientist at the ATF, Igor has either initiated or otherwise made possible a long list of breakthrough experiments with the participation of world-leading accelerator scientists as users of the facility,” said Tom Ludlam, former chair of Brookhaven Lab’s Physics Department.

Pogorelsky has been the primary driver in the development of the first terawatt, picosecond pulsed CO2 laser. The achievement is widely regarded as a scientific tour de force and its implementation at the ATF has enabled many discoveries in advanced accelerator physics, as well as enriching the ATF capabilities to support scientific research at a world-class level. Among other scientific accomplishments are several pioneering and/or record-breaking demonstrations of new methods of electron acceleration by laser beams, the first demonstration of nonlinear effects and record x-ray yields in Compton scattering, and development of a novel method of proton acceleration with promise for cancer therapy. Presently, he is working to develop a new class of ultra-fast lasers to enable strong-field physics studies in the yet-unexplored spectral domain.

Pogorelsky obtained his Ph.D. at the P.N. Lebedev Institute in Russia. After immigrating to the United States, he began his career at Brookhaven Lab with a guest appointment at the ATF in 1990. He joined the scientific staff in 1993, was promoted to physicist in 1999 and has held a continuing appointment since 2000. His work has been featured in more than 180 scientific publications and conference presentations, including many invited talks.