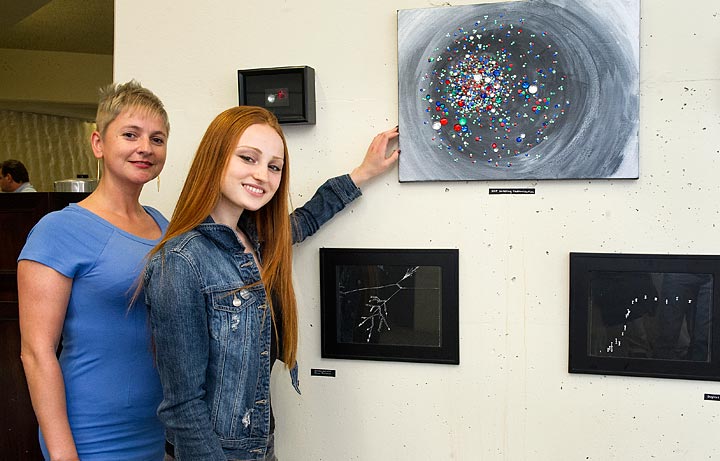 Artist Sarah Szabo (right) with pieces from her collection including "Quark Gluon Plasma Entering Hadronization," and her mentor Ágnes Mócsy , a theoretical physicist at RHIC and a professor at Pratt Institute.

When gold ions collide inside the Relativistic Heavy Ion Collider (RHIC) to replicate the conditions that existed just after the Big Bang, temperatures can reach 4 trillion degrees Celsius, the initial energy can soar up to 200 billion electron volts per nucleon, and it all takes place within a billionth of a trillionth of a second. Naturally, humans can’t be inside the detectors at this nuclear physics research facility at the U.S. Department of Energy’s (DOE) Brookhaven National Laboratory, or actually see what these collisions look like with the naked eye. The collision debris can only be “seen” with the powerful detectors that RHIC scientists use to unlock the secrets of the universe and study the strong force that holds everything together.

But when artist Sarah Szabo, who just graduated from the Pratt Institute, learned about the physics going on at Brookhaven from her astronomy professor, Ágnes Mócsy, she was inspired to create an art exhibit to visualize the science. The result, “Glamorous Gluons,” debuted at the RHIC & AGS Users Meeting at Brookhaven on June 19. The show will be on display in the Lab’s Physics Department, Building 510, until August 1.

“I think there is a lot of similarity between the cutting-edge physics research that we are doing and art,” said Mócsy, a theoretical physicist at RHIC and an associate professor of physics and astronomy at Pratt. “We are people trying to understand and figure out the world; we all do that. The medium we use is different, but the bottom line is that we all try to get an insight into the same kind of questions, and we try to understand a little more our place as humans. When we make our physics accessible, great things can happen. When physics meets art, really great things can happen.” 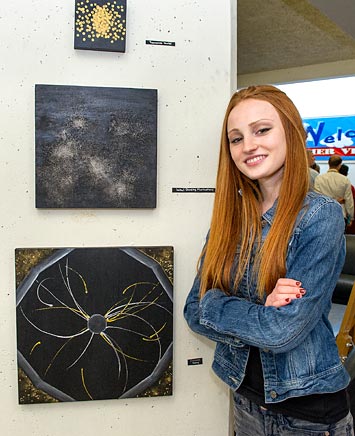 Artist Sarah Szabo with pieces from her collection, "Glamorous Gluons," at the RHIC & AGS Users Meeting at Brookhaven on June 19.

At RHIC, scientists study how the visible matter of our universe evolved from its fundamental building blocks, how protons get their spin, and how to determine the roles of the subatomic particles involved. As the gold particles in RHIC collide, the quarks that make up their protons and neutrons, and the gluons that hold them together, are liberated. The quark-gluon plasma (QGP) that results—a stand-in for what the early universe was like before protons, neutrons, and atoms formed—is a nearly perfect liquid with virtually no resistance to flow. As the hot primordial soup cools, the quarks and gluons reassemble into particles, a process called hadronization.

In Szabo’s piece “QGP Entering Hadronization,” metal springs representing gluons, and sequins and jewels representing quarks and anti-quarks “explode” in perfect concert, with equal parts matter and anti-matter shining against the black abyss. Szabo said her goal for the exhibit was to make nuclear physics accessible to non-scientists, which is why she used such common materials.

“I purposely used everyday materials,” she said, “because I wanted to present science in a way that could be understood and interesting to people in the everyday. Therefore, using materials that are more accessible seemed appropriate.”

Szabo created the pieces while she was taking an Independent Study course with Mócsy last year. Mócsy explained aspects of the physics and of her own research, gave Szabo materials to read, and even brought her to Brookhaven to tour RHIC.

The partnership produced a “mutual inspiration” from each other’s disciplines, Mócsy said, encouraging her to explain her research in new ways. But at a certain point, Mócsy had to take Szabo’s books away so she would stop learning every detail of the physics and actually make the art.

Szabo said that creative process taught her even more about the science. 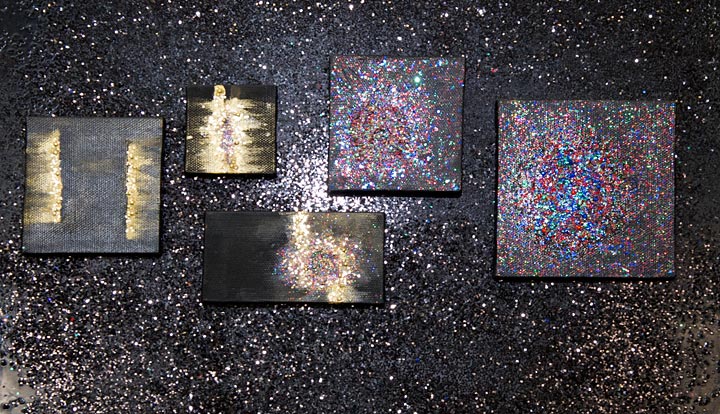 “By creating the artwork, it’s a way of better understanding what I learned,” she said. “It’s part of the process; artwork is about my gaining of knowledge. I feel like I can make the art better if I really know what the topic or object is.”

Next, Szabo plans to continue with the nuclear physics theme and make pieces that visualize the Big Bang. For that, Mócsy said she will return the physics books to her student.

“As a professor, these are the moments that you live for,” Mócsy said as she admired the completed pieces, “the realization that you actually have students who got some spark out of whatever you were teaching them.”

For more information on Szabo’s work, visit her website.