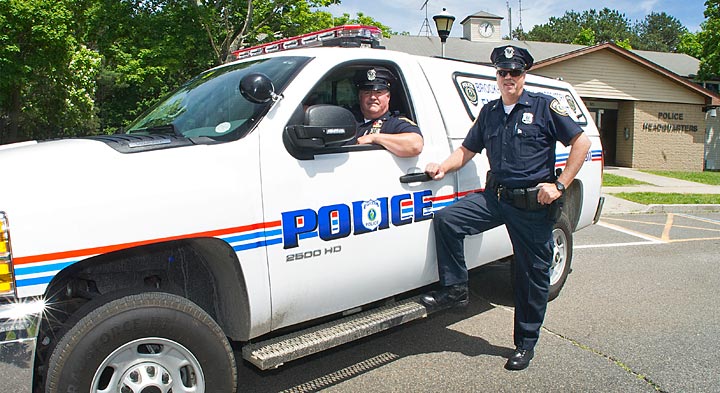 In two separate incidents, the quick thinking of Security Police Officers Brian Buckheit (standing) and David Baulch resulted in positive outcomes for two disoriented gentlemen who unwittingly found their way on to the Lab site.

We see our security police officers (SPO) at various locations around the Laboratory. The mission of these highly trained officers in the Laboratory Protection Division (LP) is to provide and maintain a safe environment for everyone at the Lab and to protect the site.

But in addition to the duties that are highly visible, such as checking credentials at the gate, enforcing traffic regulations, and providing security at Lab events, they also fulfill the safety mission by doing those less noticeable tasks such as escorting visitors to the apartment area or dorms late at night. And they can also often be found supporting charity events at the Lab. Members of LP say they are glad to be part of the crew that helps to keep employees and visitors safe and protect the Lab site. They are on call and ready to assist whenever they are needed.

On occasion, the officers are also called upon unexpectedly to help our neighbors. The two examples that follow illustrate how the response of LP staff in an emergency situation resulted in positive outcomes.

On the morning of June 14, 2014, SPO David Baulch was on routine security patrol. At about 9:45 the officer noticed an elderly man walking near the solar farm area. He approached the individual and asked him to stop, but the man looked at SPO Baulch and kept walking.

“As I approached him and asked him once again to stop, I noticed he was wet, disheveled, and seemed disoriented,” said Baulch. “Instinctively, I radioed for additional assistance from the police and fire-rescue groups.” The 7th Precinct of the Suffolk County Police was also notified to determine if there were any reports of a missing person meeting the man’s description.

The man told SPO Baulch that his vehicle became stuck in the road and he had started walking. The individual recollected that he had been walking for a “long time” and had not taken his usual medication. Upon further questioning, it was determined that he had left his vehicle at least 24 hours earlier and had walked under the Long Island Expressway (LIE) toward North Street, where he entered BNL property. As he was being medically evaluated, the fire-rescue team found a list of phone numbers, including the number of the daughter of the 71-year-old man. The daughter stated she had lost contact with her father two days earlier as he was traveling up from Florida to visit her in Patchogue. The man was transported to a local hospital where he was reunited with his daughter and received treatment for weather exposure and possible dehydration.

The police group was able to locate the man’s vehicle, which was found abandoned next to the railroad tracks south of the LIE. The MTA Police were contacted for removal of the vehicle.

The quick actions of SPO Baulch and members of the LP Division made it possible for the man and his daughter to celebrate Father’s Day together.

In another incident occurring about 2 a.m. on December 22, 2013, SPO Brian Buckheit witnessed a silver vehicle drive through the main gate at a high rate of speed. “I immediately radioed the officers on patrol and gave a description of the vehicle,” said Buckheit. “I knew my fellow officers were prepared for any situation that may arise, but I was grateful when they quickly located and stopped the vehicle before any one was injured.”

During the questioning, the officers determined that the driver, who was 73 years old, seemed confused and unaware of his surroundings. The officers secured the vehicle and brought the driver back to police headquarters where LP Captain Thomas De Simone was able to obtain a phone number and contact the man’s family.

The family stated that the driver had been missing since 5 p.m. the previous day and that they requested a missing person alert be issued by the Suffolk County Police. The family immediately came to the Lab to reunite with their father. They were very concerned about his well-being and health and were grateful to the Lab’s police group for locating their father — a positive outcome allowing them to enjoy their Christmas holidays.

“These are just two recent examples that reinforce how the Laboratory Protection Division provides an important service to our neighbors as well as our employees,” said Michael Pena, manager of LP. “We have a strong sense of community on and off site, and we were glad to have the opportunity to reunite these family members. We stand ready should we be needed again. The safety of everyone who comes on our site for any reason is our primary mission. I applaud SPOs Baulch and Buckheit and everyone in LP for jobs well done.”