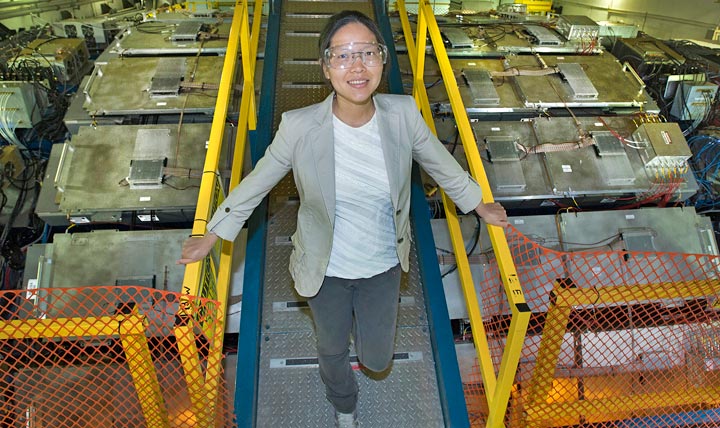 Since the 1960s, Brookhaven Lab has made some significant contributions to advance positron emission tomography (PET) techniques that doctors and researchers commonly use to diagnose cancer and study brain activity. Today at Brookhaven Lab's Relativistic Heavy Ion Collider (RHIC), scientists are using a different kind of positron tomography to probe for clues in ultra-hot seas of subatomic quarks and gluons—quark-gluon plasma, which existed just microseconds after the Big Bang and, 13.7 billion years later, is re-created during particle collisions at RHIC.

What these scientists are working to find, including "mirror-like" symmetry among interactions between quarks and gluons, offers major insights about the universe's most basic building blocks and why the physical world works the way it does.

Join Lijuan Ruan of the Physics Department for the 496th Brookhaven Lecture, titled "Special PET Scans Seeking Symmetry in Quark-Gluon Plasma," in Berkner Hall at 4 p.m. on Wednesday, July 23. All are invited to attend this free talk, which is open to the public. Refreshments will be offered before and after the lecture. Visitors to the Lab 16 and older must carry a photo ID while on site. Add to calendar 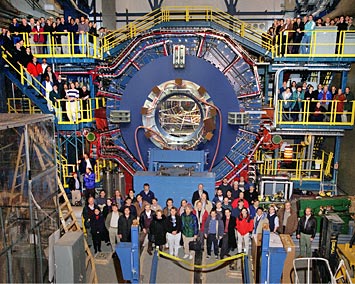 Collaborators in front of the STAR detector at RHIC, which today includes tools Lijuan Ruan helped design for electron-positron tomography to probe for clues from quark-gluon plasma

To join Ruan for dinner at a restaurant off site after the talk, contact Liz Mogavero (Ext. 3940).

During her talk, Ruan will explain how she uses electron-positron tomography from quark-antiquark annihilations to study chiral symmetry, a characteristic that "broke" to form 99 percent of the visible mass in the universe and is thought to be restored during ion collisions at RHIC. Ruan will also talk about the STAR detector at RHIC, with its special tools—some of which she helped design for tracking electron-positron pairs—as well as results from particle collisions spanning a range of energy levels.

Ruan earned a bachelor's degree and her Ph.D. in physics from the University of Science and Technology of China in 2000 and 2005 respectively, and then spent the next two years as a postdoc at Lawrence Berkeley National Lab. She arrived at Brookhaven Lab as a Goldhaber Distinguished Fellow in 2007. This prestigious fellowship—funded by Brookhaven Science Associates, the company that manages Brookhaven Lab for the U.S. Department of Energy—is awarded to candidates with exceptional talent and credentials who have a strong desire for independent research at the frontiers of their fields. The International Union of Pure & Applied Physics awarded her the Young Scientist Prize for Nuclear Physics in 2010 and the U.S. Department of Energy recognized Ruan with an Early Career Research Program Funding Award in 2013.