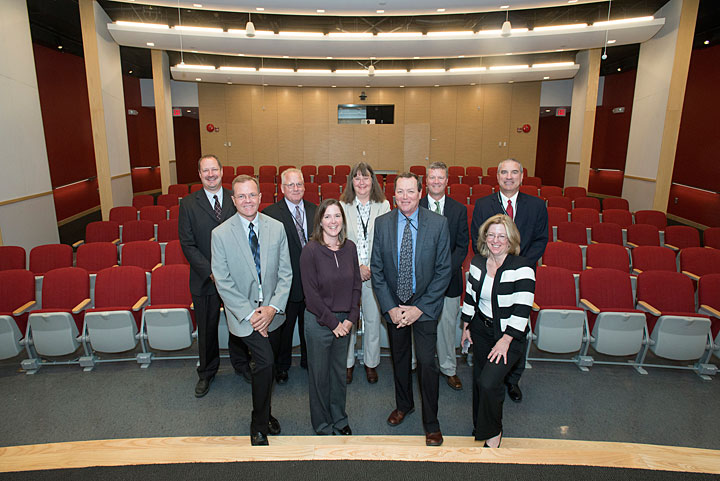 The Physics and Chemistry buildings for scientists at Brookhaven Lab date from the 1960s, but portions of their insides are like new with the Renovate Science Laboratories II (RSL-II) project now complete. The U.S. Department of Energy's (DOE) Office of Science Deputy Director for Field Operations Joseph McBrearty and Associate Deputy Director Stephanie Short toured some of the renovated spaces on the morning of July 29, before the start of a two-day workshop on site to develop an outline for what will become DOE's overall strategic plan for infrastructure.

"Some of the older buildings at Brookhaven Lab have really good 'bones,' so compared to new construction, we can save money by renovating and still end up with more modern, safe, energy-efficient facilities to support science today and in the future," said Steven Cannella of the Modernization Project Office.

Renovations involve solving new and unique problems every day. I'm proud of how our team handled challenges to get the project done on schedule and within budget.

Cannella managed the RSL-II project, which achieved the critical decision 1 (CD-1) milestone in DOE's project management process in September 2009 and the final CD milestone, CD-4, on June 4 of this year.

McBrearty and Short's first stop during the tour was the Physics Seminar Room in Bldg. 510, where scientists from around the world meet to discuss topics such as the origins of matter and mass. Next, they saw chemistry labs in Bldg. 555, where scientists study chemical properties and processes with an emphasis on advancing energy research. Along the way, Cannella also highlighted new heating, ventilation, and air conditioning systems; upgraded electrical and lighting systems; and new plumbing and laboratory services.

The RSL-II project updated 90,000 square feet of space, including 39 labs, two clean rooms, offices, and meeting areas. It also included safety improvements—such as new systems for fire protection and detection, grounding and lightning protection, and more—and modifications to meet current standards of the Americans with Disabilities Act. During the five-year project, Cannella and his colleagues also kept a strong emphasis on optimizing energy performance and efficiency, resource reuse, and construction waste recycling.

"I'm also looking forward to next year, when we can compare actual energy usage before and after the renovations. We expect to see some pretty good returns," Cannella said. "The 37 old laboratory exhaust fans in Chemistry were 40 to 50 years old with only two settings—on or off. We replaced the old fans with a new manifold exhaust system that exceeds the old system's performance, but is easier to maintain and can be regulated to use less energy based on the number of researchers in the building and their needs." 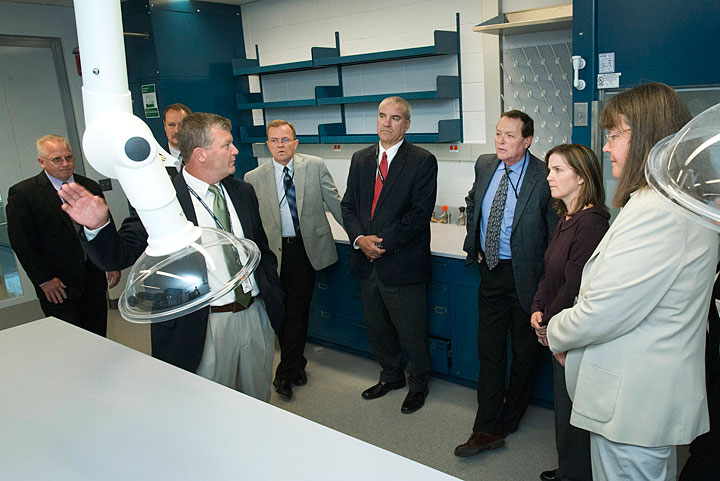 U.S. Department of Energy's (DOE) Office of Science Deputy Director for Field Operations Joseph McBrearty and Associate Deputy Director Stephanie Short (third and second from right) learn about safety features in one of the renovated chemistry labs in Bldg. 555, including the adjustable "snorkel exhaust" that draws in fumes to protect researchers and their experiments.

"Renovations involve solving new and unique problems every day. I'm proud of how our team handled challenges to get the project done on schedule and within budget," Cannella added.

The RLS-II project was funded by the Science Laboratories Infrastructure Program in the DOE Office of Science. Brookhaven Lab's Modernization Project Office managed the project and the renovations were designed by a joint venture between Bergmann Associates and EYP Architecture & Engineering.

The first RSL project, completed in February 2012, updated 27,500 square feet of laboratory, office, and common space in Bldgs. 480, where scientists at the Lab analyze properties of superconducting materials with zero electrical resistance, and Bldg. 815, where researchers are investigating tracer technologies for use in portable, durable devices to detect hazardous and potentially dangerous materials.

From left: A renovated office, lab, and the Physics Seminar Room that were part of the Renovate Science Labs II project, which achieved critical decision 4—the final milestone in the U.S. Department of Energy's project management process—on June 4.