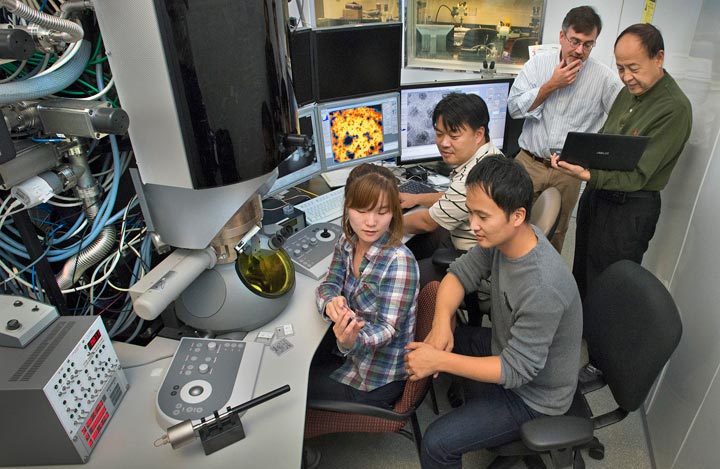 Rechargeable electric vehicles are one of the greatest tools against rising pollution and carbon emissions, and their widespread adoption hinges on battery performance. Scientists specializing in nanotechnology continue to hunt for the perfect molecular recipe for a battery that drives down price, increases durability, and offers more miles on every charge.

"The relationship between structural changes and the catastrophic thermal runaway impacts both safety and performance.”

One particular family of lithium-ion batteries composed of nickel, cobalt, and aluminum (NCA) offers high enough energy density—a measure of the stored electricity in the battery—that it works well in large-scale and long-range vehicles, including electric cars and commercial aircraft. There is, however, a significant catch: These batteries degrade with each cycle of charge and discharge.

As the battery cycles, lithium ions shuttle back and forth between cathode and anode and leave behind detectable tracks of nanoscale damage. Crucially, the high heat of vehicle environments can intensify these telltale degradation tracks and even cause complete battery failure.

"The relationship between structural changes and the catastrophic thermal runaway impacts both safety and performance," said physicist Xiao-Qing Yang of the U.S. Department of Energy’s Brookhaven National Laboratory. "The in-depth understanding of that relationship will help us develop new materials and advance this NCA material to prevent that dangerous degradation."

To get a holistic portrait of the NCA battery's electrochemical reactions, researchers in Brookhaven Lab's Chemistry Department and Center for Functional Nanomaterials (CFN) completed a series of three studies, each delving deeper into the molecular changes. The work spanned x-ray-based exploration of average material morphologies to surprising atomic-scale asymmetries revealed by electron microscopy.

“After each cycle of charge/discharge—or even incremental steps in either direction—we saw the atomic structure transition from uniform crystalline layers into a disordered rock-salt configuration,” said Brookhaven Lab scientist Eric Stach, who leads CFN’s electron microscopy group. “During this transformation, oxygen leaves the destabilized battery compound. This excess oxygen, leached at faster and faster rates over time, actually contributes to the risk of failure and acts as fuel for a potential fire.”

These new and fundamental insights may help engineers develop superior battery chemistries or nanoscale architectures that block this degradation.

The first study, published in Chemistry of Materials, explored the NCA battery using combined x-ray diffraction and spectroscopy techniques where beams of high-frequency photons bombard and bounce off a material to reveal elemental structure and composition. These x-ray studies were conducted at Brookhaven’s National Synchrotron Light Source (NSLS). 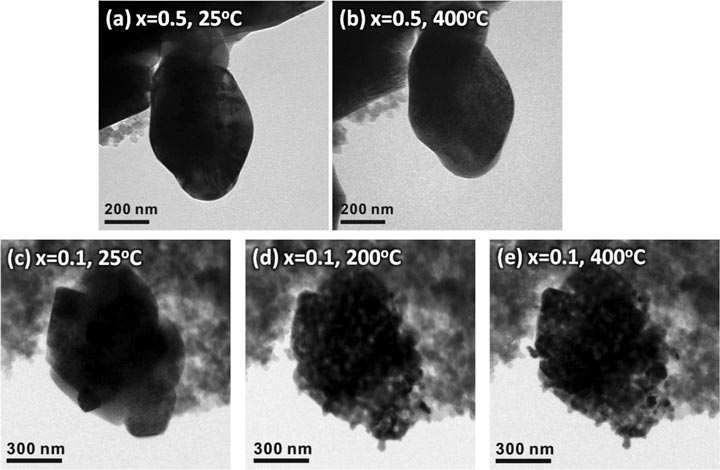 These in situ transmission electron microscopy images reveal that an uncharged NCA nanoparticle remains largely pristine as the temperature climbs from 25 to 400 degrees Celsius (top). In an overcharged sample, however, heavy structural degradation emerged and oxygen was released at ~200 degrees (bottom).

“We were able to test the battery cycling in situ, meaning we could watch the effects of increasing heat in real time,” said Brookhaven Lab chemist and study coauthor Seong Min Bak. “We pushed the fully charged NCA coin-cell battery out of thermal equilibrium by heating it all the way to 500 degrees Celsius.”

As the temperature rose, x-rays struck the sample and revealed the widespread transition from one crystal structure to another. The team also measured the amount of oxygen and carbon dioxide released by the NCA sample—a key indicator of potential flammability.

“The oxygen release peaked between 300 and 400 degrees Celsius during our trials, which is above the operating temperature for most vehicles,” Bak said. “But that temperature threshold dropped for a highly charged battery, suggesting that operating at full energy capacity accelerates structural degradation and vulnerability.”

While they further confirmed the results with x-ray absorption spectroscopy and electron microscopy after the heating trials, the team needed to map the changes at higher resolutions. 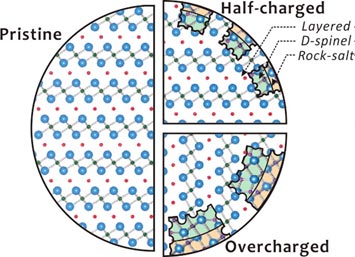 Diagram showing the NCA structural transformation from discrete layers in the pristine sample to disordered spinel and rock-salt configurations as the charge increases—largely a result of oxygen being released from the material.

The next study, also published in Chemistry of Materials, used transmission electron microscopy (TEM) to pinpoint the effect of an initial charge on the battery’s surface structure. The highly focused electron beams available at CFN revealed individual atom positions as an applied current pushed pristine batteries to an overcharged state.

“The surface changes matched the rock-salt evolution found in the x-ray study,” said study coauthor Sooyeon Hwang of the Korea Institute of Science and Technology (KIST). “Even with just one charge on the NCA battery we saw changes in the crystalline structure, and it grew much worse as the charge level increased.”

“We found a decrease in nickel and an increase in the electron density of oxygen,” Hwang said. “This causes a charge imbalance that forces oxygen to break away and leave holes in the NCA surface, permanently damaging the battery’s capacity and performance.”

While this combined crystallographic and electronic data confirmed and clarified the earlier work, temperature effects still needed to be explored with atomic precision.

The final study, published in Applied Materials and Interfaces, used in situ electron microscopy to track the heat-driven decomposition of NCA materials at different states of charge. The atomic-scale structural investigation under variable temperatures and charge levels offered the most comprehensive portrait yet. 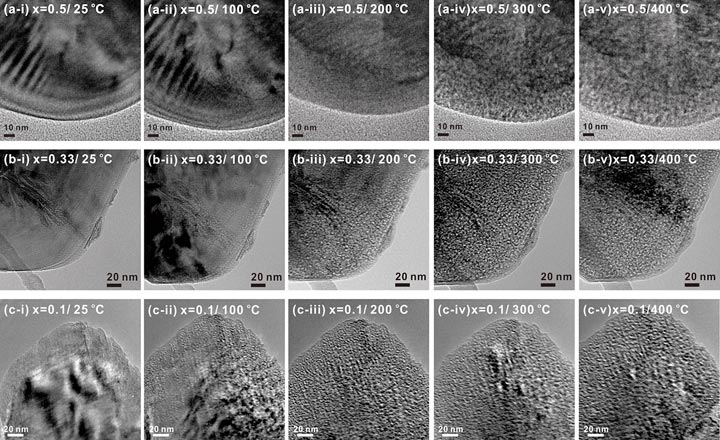 These transmission electron microscopy images reveal structural transformations in the surface of differently charged NCA nanoparticles as temperature rises from 25 to 400 degrees Celsius. The nanoscale degradation manifests at lower temperatures and more intensely in the over-charged samples (bottom), as compared to an average charge (middle) or the pristine/uncharged (top).

The collaboration found that even though pristine and uncharged NCA samples remained stable up to 400 degrees Celsius, charging introduced the usual decomposition and vulnerabilities. The full story, however, was much more nuanced.

“We saw the same overall degradation patterns, but the real-time TEM revealed an unexpected twist within individual particles,” Stach said. “When fully charged, some particles released oxygen and began to shift toward disorder down at temperatures below 100 degrees Celsius—definitely plausible for a lithium-ion battery’s normal operation.”

Added Hwang, “Those unstable, degraded particles may trigger the chain reaction of so-called thermal runaway at lower temperatures than expected, and that free oxygen would feed the fire springing from an overheated battery.”

The future of batteries

The corroborating data in the three studies points to flaws in the chemistry and architecture of NCA batteries—including the surprising atomic asymmetries—and suggests new ways to enhance durability, including the use of nanoscale coatings that reinforce stable structures.

“We plan to push these investigative techniques even further to track the battery’s structure in real-time as it charges and discharges under real operating conditions—we call this in operando,” Stach said. “Brookhaven’s National Synchrotron Light Source II will be a game-changer for this kind of experimentation, and I’m eager to take advantage of that facility’s ultra-bright x-rays to track internal and surface evolutions in these materials.”

The studies were funded as part of a Korean Government “Global Research Laboratory,” which exists to support and take advantage of leading experimental capabilities abroad. This program specifically supported collaborators Seong Min Bak and Sooyeon Hwang and their research at NSLS and CFN, both DOE Office of Science User Facilities.

The Office of Science is the single largest supporter of basic research in the physical sciences in the United States, and is working to address some of the most pressing challenges of our time.  For more information, please visit science.energy.gov.