Many appreciate the ambiance of the pub, where dim lights can dance off the foamy head of a perfect pint while still concealing some of our less flattering features. The same particles behind that soft glow can also be tuned and focused with such extreme intensity that every nanoscale detail of a material is dazzlingly illuminated. Scientists from Brookhaven Lab recently brought stories of just such light-driven investigation to a Long Island bar.

On the evening of Sept. 17, 2014, a crowd gathered at Storyville American Table’s Backyard Bar in Huntington to learn about how ultra-bright beams of x-ray, ultraviolet, and infrared light can illuminate the secret structures of the atomic world—all as part of a casual evening of food, drinks, and engaging conversation. 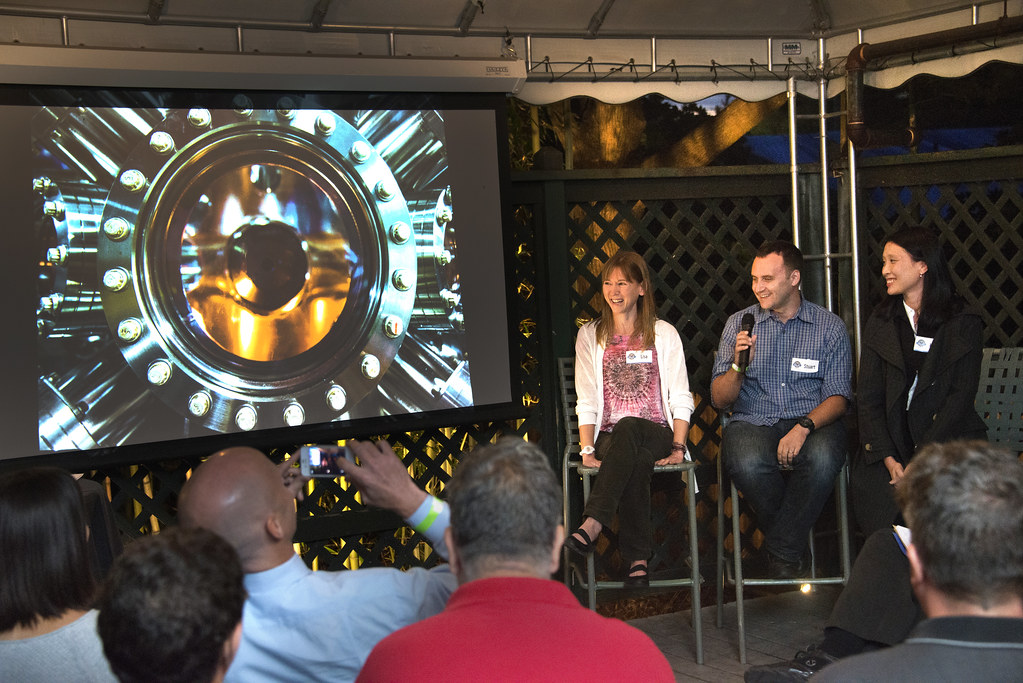 In Brookhaven’s third PubSci, three scientists from the Lab’s Photon Sciences Directorate led the audience in a conversation about the frontiers of light-driven discoveries in biology, physics, and energy technology. The discussion explored a wide range of research, including the quantum-scale puzzle of high-temperature superconductivity, the subtle cellular signatures of Alzheimer’s, and the dense chemistry of lithium-ion batteries.

The event also explored past discoveries and highlights from the 32-year career of Brookhaven’s National Synchrotron Light Source (NSLS)—one of the world’s first and most prolific synchrotron facilities—including two Nobel Prizes.

The transition to the world-leading National Synchrotron Light Source II (NSLS-II) is currently underway at the Lab, and the scientists discussed the unprecedented capabilities of the new facility as well as the tremendous engineering behind its design and construction. The half-mile NSLS-II will begin operations soon and begin pushing toward billionth-of-a-meter precision.

The crowd offered up many questions about everything from the electromagnetic spectrum and the fundamental nature of high-frequency x-rays to the energy-sector jobs created through research at these massive microscopes.

Brookhaven Lab’s next PubSci event will focus on the global science of climate, from tracking clouds to hunting for patterns in data taken all over the world. Stay tuned for information on the date and location of future events.