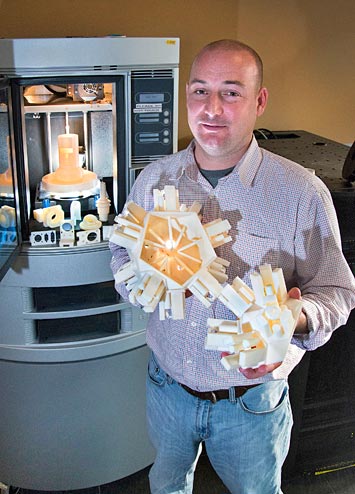 Leo Reffi stands in front of the 3D printer in Bldg. 743, holding two parts of a model of a sample chamber for NSLS-II beamline ISS. The whole beamline will be modeled in three-dimensional CAD software, with certain parts 3D printed depending on the needs of the scientists and engineers. Displayed inside the process chamber are parts of a housing assembly that Reffi made for a capillary sample spinner at beamline XPD.

It looks like a coffee dispenser. But the nondescript grey box tucked against a wall in Bldg. 743 is actually a 3D printer. It’s in high demand by scientists and engineers building beamlines for the National Synchrotron Light Source II (NSLS-II).

“They use it to test their ideas before committing to final designs,” said mechanical designer Leo Reffi. All print jobs are controlled by Reffi.

“After getting a few jobs printed on the outside and evaluating our needs for about a year, the design group acquired the printer in June 2012. Now it’s pretty much running all the time,” said Reffi, who joined the Lab in 2008 with design experience on 3D printers. In between print jobs, he provides design support for NSLS-II beamlines IXS and CHX.

While Brookhaven’s industrial setting requires these printers — the Instrumentation Division uses them for work on the Large Synoptic Survey Telescope and Central Fabrication Services has one —Reffi said that lower-end 3D printers are starting to appear in homes. They can range in price from $300 for a beginner to $3,000 for a hobbyist. Brookhaven’s Science Learning Center is using 3D printers for a course with teachers and students (see sidebar).

The Office of Educational Programs (OEP) purchased three 3D printers last year, aware of the units on site, museums like the Smithsonian acquiring them, and articles on 3D printing starting to appear in the popular press. “We wanted to remain on the cutting edge for our student programs, and 3D printers connect nicely to science at Brookhaven Lab,” said Bernadette Uzzi, who supervises the kindergarten through grade 12 educational programs at the Lab. “Schools are beginning to look at these printers for technology classes.”

She added that engineering is a core element of the Next Generation Science Standards, developed by the National Research Council in partnership with science and educational organizations.

For OEP’s maglev contest earlier this year, students designed magnetically levitated cars, made them in a 3D printer, and tested their designs. During an engineering program, Boy Scouts created neckerchief slides, key chains, tent stakes, and sporks. At Sci-Ed 2014, a professional development day for teachers, one workshop was dedicated to 3D printing. Uzzi quoted a satisfied teacher: “Getting to use the technology really made it seem more accessible and easy to incorporate into my classroom.”

Alexei Soares, a biophysicist with NSLS-II, was a guest speaker at the Sci-Ed workshop on 3D printing and showed trays designed for his newly developed technique for protein crystallization. “He explained how this new technology enables him to conduct his research,” said Uzzi.

“Retail stores are now selling machines that can print simple items,” said Reffi. “There is a lot of file sharing online, so if you have no experience using design software to model parts, you can just download files to make things — like a phone case, a toy, even a knob to replace the broken one in your car.”

A 3D printer makes solid objects from digital designs. You choose the design, send it to the printer, and click on the “make” button. The machine heats up a slender filament of material until it melts, then puts down very thin layers in the shape of the object. The process is additive — the printer deposits material layer upon layer to build up the object. This can take hours or days depending on the size and complexity of the object.

On the Lab’s industrial printer, using professional software, Reffi makes fixtures, parts used as place holders, large-scale parts built in sections that have to be assembled, and various R&D components. His printer uses ABS (acrylonitrile butadiene styrene) plastic, good for making durable parts that can withstand higher temperatures. According to Reffi, consumer models commonly use PLA (polylactic acid) plastic, a material made from natural resources and used to make biodegradable medical sutures. Besides plastics, other available materials include paper, rubber, and metals.

The ABS plastic in Reffi’s printer has to be heated between 250-270 degrees Fahrenheit to melt (water boils at 212 degrees F). That printer also gives him pretty fine control of resolution. For more detail or when the item is small, Reffi sets the printer to apply layers 0.007 inch thick. For large-scale pieces with fewer features, he will apply 0.010-inch layers. “It takes less time,” he said.

The choice of resolution is just one of many variables that Reffi thinks through as a designer. When he gets a job, it often comes in the form of a quick sketch. Then he asks questions: Is the piece heavy? Is it solid? How is it going to be used? Is it for just a demonstration? Is it part of a longer R&D project? Also, the printer’s working envelope is 8" x 8" x 12", so when Reffi needs to make something larger, he has to do it in pieces and be clever about how he’s going to assemble them.

“Some jobs are quick and easy. Some are not. It all depends on the project,” said Reffi, with a shrug and a smile. “I always give my input. If I can save someone time and money on a job, that’s good.”