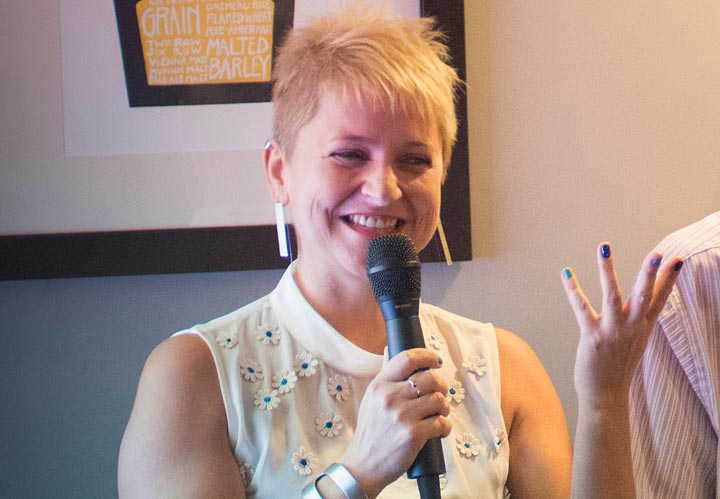 “I never forget how much in awe I was when I first saw RHIC,” said Ágnes Mócsy, a theoretical physicist and tenured associate professor at Pratt Institute, one of the world’s prestigious art and design universities. She was a graduate student at the University of Minnesota stepping into the world of experimental nuclear physics at the Relativistic Heavy Ion Collider (RHIC), a particle collider and DOE Office of Science User Facility at the U.S. Department of Energy’s Brookhaven National Laboratory, “where I could see firsthand how the theories I was working on with pen and paper were being put to the test.”

One of her many missions is to convey that sense of awe to what may seem like an unlikely audience: the art students she teaches in physics and astronomy classes for non-physics majors at Pratt.

“I want to be an advocate for science and an advocate for big science. If RHIC did not exist, I would not have such a tangible and impressive example of science to show off!”

“I work at the intersection of art and science so that I can pass my enthusiasm about the fascinating discoveries in science on to my students and instill in them scientific skepticism,” she said. “I think it’s so important to teach this to a broad audience as the best method for seeking truth in all areas of life. By teaching my students more about how the process of science is carried out, they will become more effective at addressing, evaluating, and responding to other issues in our society.”

As a graduate student, Mócsy conducted predictive studies of the particles RHIC would produce even before it started operating in 2000. After earning her Ph.D. in 2001, she continued her association with RHIC, eventually taking a position with the theory group at the RIKEN-BNL Research Center (RBRC). “When I got the job, I was so excited to finally fulfill my dream of working at Brookhaven that I left a Humboldt fellowship at the Goethe University in Frankfurt a year early,” she said.

“Working on RHIC physics has been my entryway into the world of science. This is where I learned to think like a scientist. This is where I learned how the scientific method actually works,” she said. “RHIC also helps me connect with the public. They are as inspired by this facility as I am. RHIC is a very powerful symbol of the ambitions and accomplishments of mankind.”

The desire to share that broader view of the importance of RHIC and science in general is what ultimately led Mócsy to her current role at Pratt, even after having been offered the opportunity to take a position at a research university.

“Such a position was the career goal that I had been working towards throughout my life as a physicist. The decision was an excruciating one, but in the end, I decided to turn it down for the opportunity to continue working at Pratt, where I have the chance to reach a broad audience and tap into the creative potential of my students and colleagues. My goal, besides continuing research, is to find ways to explore and create connections between the well of creativity at Pratt and the well of scientific ideas at Brookhaven.”

She frequently brings her students to RHIC for tours.

“These students, who are learning about physics and astronomy in the classroom, are very inspired by what they see. It can really be part of a transformation for them as they develop a deeper appreciation for science. In that sense, RHIC is an amazing tool not just to do physics, but also to inspire students. I’ve had students change their career paths based on their newly discovered passion for science, or have their artistic expression stirred towards science.” 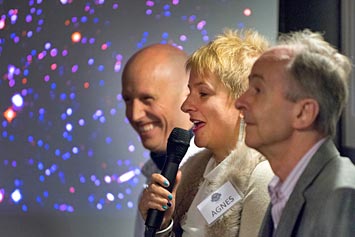 As a theoretical physicist who often finds herself the only female present in meetings or seminars, Mócsy has also become a passionate advocate for minorities in physics. “In the past year I’ve been invited to talk about the value of and possible avenues for extending STEM [science, technology, engineering, and mathematics] education and careers to minorities,” she said.

To get her messages across, she has dabbled in the art of filmmaking and other forms of outreach. In 2013, she produced a short opinion/documentary film entitled “Smashing Matters,” together with a science advocacy website, to convey “the far-reaching yet incalculable value of fundamental research.” She’s brought her stories about the fun of research at RHIC to several “science café” events at pubs near Brookhaven (PubSci) and New Haven, and a theater in Manhattan. And she’s presented her views on the importance of science and RHIC in particular to members of Congress as part of the RHIC/AGS Users Executive Committee.

“I want to be an advocate for science and an advocate for big science. If RHIC did not exist, I would not have such a tangible and impressive example of science to show off!”

The impacts, she emphasizes, can be global.

“The world of physics is a highly international endeavor: we meet and work together with colleagues from all over the world, and we get to travel to far places, be exposed to such a large variety of cultures. Even countries that might otherwise not be best of friends end up working together for the common goal, that of unveiling the truth of nature.”