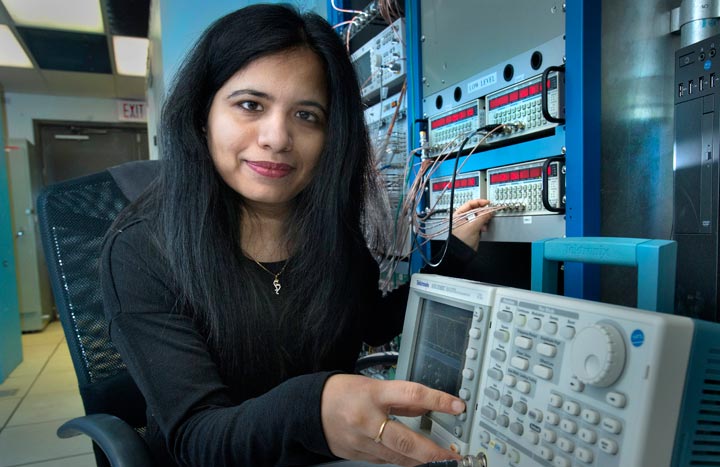 Prerana Kankiya of Brookhaven Lab's Collider-Accelerator Department, who coded a software package to control the delay generators shown near her left hand in this photo. These devices trigger instructions for other instrumentation for an energy recovery linear accelerator being developed for a proposed electron-ion collider upgrade at the Relativistic Heavy Ion Collider (RHIC), called eRHIC.

"Cars and particle accelerators, smart phones, and lots of other devices we use every day contain sensors and computers few of us ever see. These systems measure conditions inside a machine and tell cooling fans when to kick in or the Wi-Fi antenna in your smartphone to turn off when the battery gets too low," explained Prerana Kankiya, who writes computer software to control "internal" systems for particle accelerators at Brookhaven Lab.

Kankiya is a member of the Collider-Accelerator Department's Front End Systems Group, led by Jim Jamilkowski and including teammates Margaret Harvey, Robert Olsen, and Winston Pekrul.

Kankiya and her teammates in the Front End Systems Group are coding special tools for a new "green" particle accelerator called an energy recovery linear accelerator (linac) that is critical for a proposed electron-ion collider upgrade at RHIC, called eRHIC. By accelerating electron beams to collide with heavy ions or protons, physicists would use eRHIC to probe even deeper into the mysteries of the strong force that confines all quarks and gluons in all the Universe's protons and neutrons, and to unlock secrets of the proton's spin structure.

Kankiya and her teammates work on research and development for an energy recovery linac to advance accelerator technologies for eRHIC. The energy recovery linac could accelerate particle beams to very high current using modest amounts of radiofrequency power by decelerating and recovering energy from "used" electrons. Compared to other acceleration techniques, this “green technology” would greatly increase eRHIC’s energy efficiency, reducing power consumption by a factor of 50.

Software for Millions of Particle Bunches

With about 1,500 lines of C++ computer code and several months for designing and testing, Kankiya wrote a time-management software package that researchers can use to control particle beams for the energy recovery linac. Specifically, her software controls electronic devices called delay generators, devices that trigger other devices to collect measurements—such as signals from an infrared camera looking for traces of beam and integrated current transformers measuring the beam's current—before triggering the system's next instruction.

Step by step, series by series, the system determines when the components are primed and working properly before the continuous beam containing millions of electron bunches can be fired. Thanks to both the high-end hardware and the software Kankiya created, each portion of the overall process—a measurement collected and instruction triggered—can occur in just fractions of a second.

Kankiya's software also uses TCP/IP—the same protocols that computers use to communicate across the Internet—to integrate new delay generators purchased from an outside vendor with delay generators the Lab's Instrumentation Division already built in-house for RHIC. And while the software is customizable, so physicists can test different settings without altering the software's source code, Kankiya wrote a second "layer" of software instructions that automates the time-management process as well.

In addition to Kankiya's work on the time-management software for the energy recovery linac, she collaborated with researchers from the Accelerator, Instrumentation, and Vacuum Groups to design software controls for electron lenses to increase the number of particle collisions at RHIC.

In addition to Kankiya's work on the time-management software for the energy recovery linac, she collaborated with researchers from the Accelerator, Instrumentation, and Vacuum Groups to design software controls for electron lenses to increase the number of particle collisions at RHIC.

"I used a coding technique called 'parameter cloning' to help create enhancements, so when accelerator control room operators ask us to add a new parameter to the system, we can do it with less computer code, and fewer delays or waits for scheduled downtime," Kankiya explained.

Looking Back & Looking Ahead

As both devices and software advance, Kankiya is advancing with them.

Kankiya has become interested in the growing Internet of Things, everyday and industrial devices networked to work together across the Internet—like, for example, a "smart" thermostat you can program and control from your smartphone—to explore how related technologies and customizable open-source computer software could benefit scientific exploration and everyday life.

"The idea of embedded software programs working in complementary systems is really exciting," Kankiya said. "I remember going on field trips to a steel manufacturing plant as a child growing up in Bhilai, India, and I was always fascinated by the machines, computers, and systems that were in place to operate the plant. Now I'm working with such smart people to develop controls for systems for not a steel manufacturer, but for state-of-the-art particle accelerators."

Kankiya earned a bachelor's degree in electronics and telecommunications at Pt. Ravishankar Shukla University in India in 2007. She came to the United States that same year for a master's program in electrical engineering at Stony Brook University that she completed in 2008. Before arriving at Brookhaven Lab in 2009, Kankiya developed computer systems for heavy-duty hybrid vehicles for a company in Hauppauge, New York.

While Kankiya stays focused on developing software for computer systems at the Lab today, she makes time for far more than that. She mentors a high school student in the Bronx through the nonprofit organization iMentor and travels often for fun, work, and to visit her family in India once a year. She also takes classes at Stony Brook University's Craft Center occasionally and pours drinks—not professionally, but this programmer is armed with a certificate in bar tending.